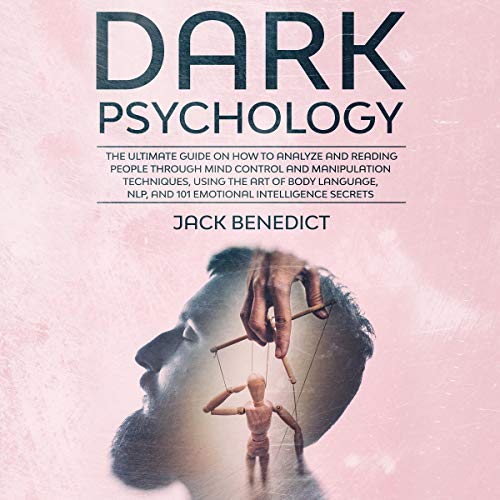 By: Jack Benedict
Narrated by: Brian Housewert
Try for $0.00

Do you ever get the feeling that you are being used, played with, or manipulated? Do you want to know how dark psychology is used and who is using it? Would you like to understand their secret methods and avoid having them used on you?

Manipulative individuals may come across as nice people. However, they use dark psychology to trick, attract, and trap you in a relationship before revealing their true nature. They can be detached or pleasant one moment, and defiant the next. They won't let up until they wear you down. In their minds, it’s all about them.

We are all potential targets for a dark psychological attacker. We are all susceptible to the power of hidden manipulation...now more than ever. Suggestive images, trickery, and mind games bombard us every day.

In Dark Psychology, Brian Hall clearly explains everything you need to know about recognizing and avoiding dark energies, cult followings, and darker human desires to the powerful techniques, behaviors, and attributes employed to control or dominate others.

Some information that you’ll unlock in this helpful audiobook include:

Even if you sometimes feel socially awkward or can’t seem to pick up on people’s true intentions, this audiobook helps you identify dark behavior patterns in people and how to definitively avoid becoming a dark psychological person’s victim.

Don’t wait. Get started today by scrolling up and clicking the "buy now" button right away!

What listeners say about Dark Psychology

basic logical techniques.
no real depth into action or why the brain works like it does. very basic, may be ok for someone that is completely socially inept

All of the information very essential for our life

From this audiobook I learned about the Dark Psychology and also learned how to analyze people with their Body Language, This audiobook helped me to understand it. So thanks to the author for this audiobook. All of the information very essential for our life

This audio book is easy to follow and understand

From this audiobook, i learned how to effectively persuade and convince other people using powerful techniques that work. Now I am following those instructions to control my mind and emotions. I'm satisfied to listen to this audiobook. This audio book is easy to follow and understand

I think this is a reliable audible for us

This audible has all the tips and guidelines to you help you successfully create Dark Psychology sources. Dark Psychology simply means you make your money or resources work for you.This book would be a great start for a beginner and not say someone who is looking for techniques on NLP. The title is misleading

We are all potential targets for a dark psychological attacker. We are all susceptible to the power of hidden manipulation...now more than ever. Suggestive images, trickery, and mind games bombard us every day.The exact formula for getting out of a manipulative relationship

Extraordinary audio book for all !

This audiobook will give the peruser the high ground so they can be watchful for these contrary individuals. This is formed well and point by point. I would love to scrutinize it again and again. So, I highly recommend this great one audiobook.

It provides invaluable techniques for people who have held a solipsistic view of the world. have benefited greatly by purchasing that audiobook. Because this book helped me to acquire some new knowledge. I highly recommend this audiobook.

I found this audiobook very helpful and creative.

I thoroughly enjoyed listening to this audiobook. It was a quick read with a wealth of information. It’s geared more for the beginner but works well as a quick reference for the more experienced.

Everyone should listen this audio book

This is really a good audiobook. Very clear and concise explanations and descriptions of Dark Psychology & Manipulation. I really enjoy this audiobook and found it really helpful. Great insight, very useful for Dark Psychology. This audiobook has met my expectations so far. Really useful sources provided in this version.

This is a compact and very educational book that gives practical exercises for feeling better. I would recommend this to any self-help enthusiast.Perfect book on development.I learned first to analyse myself then start with other people. I liked learning how To interpret each body language. Totally recommend the audiobook worth the listen.

This is definitely one of the best audio book

This book challenges you to dig deeper into your goals and desires, reflect on your priorities and question your daily behaviour and habits. Whatever subjects it explores, it always roots the theory into practical exercises you can start applying immediately.

This is absolutely the best one

This book makes me basically make a few data evaluation effectively. This is absolutely the best one. It more over delineates techniques that will help you to control mind, insights, and emotions. There is similarly information about NLP and enchanting.

This is really awesome audiobook

Very clear and concise explanations and descriptions of manipulative manoeuvring.I have learned that through our body language, we can influence a lot of people, portray confidence, and exude aura. I have learned the basic principles and the different techniques of body language. Really worth recommending to all!

It is very helpful and useful audiobook

I really enjoyed this book and found it very educational. .This audiobook is an incredible book that is elegantly composed and straightforward. I have a lot of audiobooks this subject and this is one of my top choices. I truly love this audiobook.

This book helped me to understand more

This is very effective audiobook

Most of the concepts and techniques were glossed over leaving me to look for better-informed books elsewhere.I have learned that through our body language, we can influence a lot of people, portray confidence, and exude aura. I have learned the basic principles and the different techniques of body language. Really worth recommending to all!

This is really awesome audiobook.

The author Narrated this audiobook in an explained and easy way including steps to follow in practical actions, so anyone who wants to learn about body language could understand. It was alright. It wasn't as in-depth as I was led to believe before purchasing. This is really awesome audiobook.

I have learned so much this audio book

I am completely listening to this audiobook I can about Body Language. Great audiobook ever. I really enjoyed this audiobook and found it absolutely educational. I have learned so much this audio book