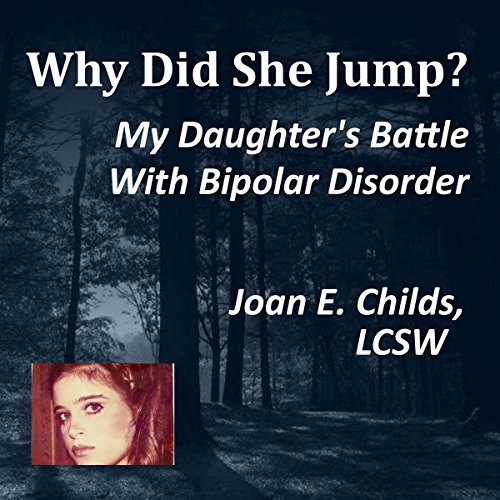 Why Did She Jump?

By: Joan Childs
Narrated by: Mindy Grall
Try for $0.00

There is one day in Joan Childs' life that she wishes she could do over: the day her daughter, Pam, a brilliant psychotherapist, plunged from a 15-story building to her death. In this vivid memoir, Childs (herself a psychotherapist) explains how her daughter's life was taken by the most unforgiving of executioners: bipolar disorder. It was the delusions, not her daughter, who made the final decision to end her life.

Why Did She Jump? provides an intimate, uncompromising look into one mother's search for peace, understanding, and clarity amid the chaos surrounding her daughter's tragic death, and a masterful recounting of the events leading up to the fateful day, lifting the veil of shame and secrecy to forge a path toward understanding bipolar disorder and other mental illnesses.

Ironically, even though Pam and Joan were both noted and skilled psychotherapists, Pam still could not be saved. In heartrending prose, Joan recounts vivid memories of Pam's life - the extreme highs and lows; the many red flags; how her daughter toggled both worlds as a brilliant therapist who healed unreachable patients while at the same time she herself unraveled; and how she fooled everyone into thinking she was stable.

With searing honesty and great insight, Childs offers a rallying cry of support for anyone going through a similar struggle.

What listeners say about Why Did She Jump?

This was poorly written and bizarre. Religious and repetitive-although the story is sad. Audible would not allow me to exchange it.

What could Joan Childs have done to make this a more enjoyable book for you?

I bought this book thinking it was about Bipolar Disorder. However, the entire book was a memoir about the mother, her love of all five of her children, her marriages, etc. The Bipolar Disorder of her first daughter was mentioned, but was not the focus of the book. It was more of a rambling recollection of a mother who needed to grieve the loss of her daughter. So much of the book was about the mother and her life, that most of the time I was bored listening to it. I had thought I was going to get a more in depth look at her daughter's life, her disease, and how it took her life. I really didn't want to read about her silly superstitions and her ideas 'that everything happens for a reason'. Blah.

I narrator didn't help the book in the least. Her reading was flat and monotone. She read the book like she was bored with the subject. Maybe she was.

Regardless, I wouldn't recommend this book to anyone. It is boring, depressing and a bit silly. I never felt any connection to the mother or her children. I wanted to, but I couldn't. I was just glad when the book was over.

Having lost loved ones to suicide, and needing to find others whose stories shared meaning and/or honesty, I was willing to give this author a lot of leeway. I listened to part of it. Reminded me of why I moved away from California.