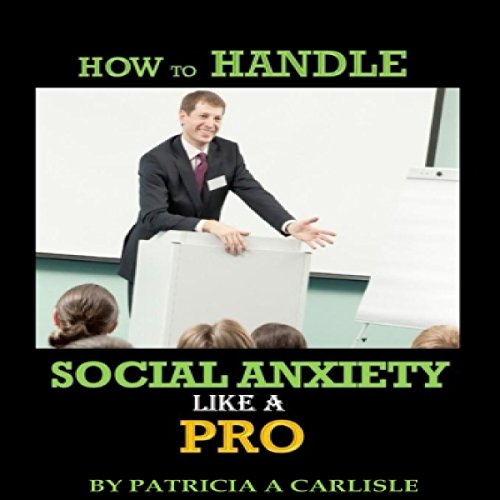 By: Patricia A Carlisle
Narrated by: Jeffrey A. Hering
Length: 1 hr and 27 mins
Categories: Science & Technology, Medicine
4 out of 5 stars 4.0 (1 rating)

By: Patricia A Carlisle
Narrated by: Jeffrey A. Hering

This book contains proven steps and strategies on how to handle social anxiety like a pro. Social anxiety is a feeling of extreme nervousness in social situations. Behind the anxiety is the fear of getting rejected or humiliated in front of other people. If you're suffering from social phobia, you probably constantly feel like you're being watched, scrutinized or criticized, and you're afraid of doing something that others won't approve. Luckily, social anxiety is treatable.

You can get rid of your anxiety and fears if you're dedicated, and keep in mind that it won't happen overnight since it's hard work to rewire your brain. Social anxiety is equally common in men and women in the United States, and is considered within a group of social phobias that affect cultures around the world - as much as 3 percent of any given population. However, moderate fears like those of meeting new people, speaking in public, or dealing with criticism are common, and cannot be defined as social anxiety.

Social anxiety, instead, can take on a more inverted nature, being defined as a fear of interaction that sparks self-consciousness, inferiority, depression, inadequacy, and negative judgment from others.

Social anxiety is the fear of being judged and evaluated negatively by other people, leading to feelings of inadequacy, inferiority, self-consciousness, embarrassment, humiliation, and depression. If a person usually become (irrationally) anxious in social situations, but seems better when they are alone, then "social anxiety" may be the problem. Social anxiety disorder, formerly termed "social phobia" is a much more common problem than past estimates have led us to believe. Millions of people all over the world suffer from his devastating and traumatic condition every day, either from a specific social anxiety or from a more generalized social anxiety.