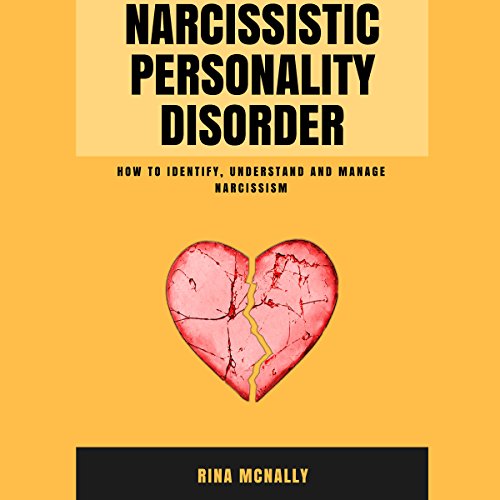 By: Rina Mcnally
Narrated by: Rebecca Nance
Free with a 30-day trial

Narcissism is a topical subject. It has always been known to afflict famous personalities, movie stars, and corporate stars. The interest in narcissism has now peaked with a new high profile personality reported to be suffering from it - Donald Trump. Do you see him as a narcissist or a messiah of the American masses? Listen to this book to analyze the pros and cons of this controversial disorder.

But narcissism is much more than a disorder vexing the rich and famous. Is a narcissist powerful and ruthless person, like he is made out to be? Or is their bravado, swagger and bluster only a mask to protect their delicate personality? How do narcissists perceive themselves? How others perceive them? How do narcissists see others perceiving them? Are narcissists intentionally fooling or deceiving themselves about their larger-than-life image? If so, what purpose does it achieve? There must be some reason and method to the madness. This book comprehensively addresses this dilemma.

Modern media bombards you with messages which range from bizarre to overtly spectacular. Reality television gives you a vicarious peek into the lives of the rich and famous. The naked truth is purveyed in center-spreads of glossy tabloids. There is no escape from obsession and narcissism. You are forced to identify with one glam star or other. The cult of narcissism is within your reach and lounging just around the corner. Is it possible to escape from the clutches of narcissism?

Narcissistic Personality Disorder: How to Identify, Understand and Manage Narcissism will reveal the inner secrets of a narcissist to you.

Is this a high school psych class paper?

Very limited citations of scientific studies means that this book is full of what feels like homespun wisdom, written by someone I ended up feeling doesn't have a grasp on what it is she's trying to write about. At one point it's just a list of famous people who *must* be narcissists based on their public behavior (totally ignoring the possibility that a media persona may be very different from how celebrities are in private). McNally treats narcissism, psychopathy and sociopathy like they're choices for those with the disorder, and the pejorative way she talks about them lacks a mature or nuanced understanding of the conditions and their sufferers. To be clear on this: these kinds of disorders are no more a choice than depression or being left handed. They are the only personal experience the sufferers have, and so they're all those people know as normal - when they find out the rest of the population deals with emotions differently, they are often genuinely confused about why they behave how they behave. When discussing relationships, McNally defaults - every single time - to heteronormative cisgender roles, which further indicates the immaturity of the author, the dated understanding she has of how humans self-identify and undermines any of the few good points she raises. It's like the book was written by someone who's watched too many CSI, Criminal Minds and Law & Order episodes and now thinks she has some insight into how abnormal and neurodiverse brains work. As far as I can tell, there are no books out there FOR people who think they may have narcissistic tendencies and want to curb them, only books on how to manage/recover from the narcissist in your life.

Avoid this unless you are a Never Trumper or women's study. Full of over-generalizations and innuendo. Performance ok. Few facts to back up assertions. At one point admits to gleaning information from social magazines.