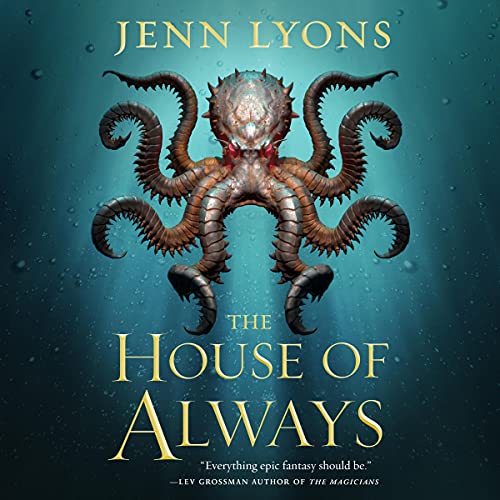 The House of Always

By: Jenn Lyons
Narrated by: Lauren Fortgang,Vikas Adam
Try for $0.00

For fans of Brandon Sanderson and Patrick Rothfuss, The House of Always is the fourth epic fantasy in Jenn Lyons' Chorus of Dragons series that began with The Ruin of Kings.

What if you were imprisoned for all eternity?

In the aftermath of the Ritual of Night, everything has changed.

The Eight Immortals have catastrophically failed to stop Kihrin's enemies, who are moving forward with their plans to free Vol Karoth, the King of Demons. Kihrin has his own ideas about how to fight back, but even if he's willing to sacrifice everything for victory, the cost may prove too high for his allies.

Now they face a choice: Can they save the world while saving Kihrin, too? Or will they be forced to watch as he becomes the very evil they have all sworn to destroy.

What listeners say about The House of Always

one of the best books I've ever read

overall a great book, and an excellent series. problem the best executed love triangle I've ever heard of.
but beyond that its not often a book looks you in the eye and succinctly breaks you down and put you back together. I needed to hear Lady D'Talus's monolog. I have openly wept for characters in books before, but this is the first time a book has made me cry for myself. Jenn Lyons has be solidly set as one of my favorite authors now even if the rest of the series weren't excellent. This will likely be my favorite book of all time. I eagerly await the finale.

The narrator who covers Kihrin's POV somehow makes me want to roll my eyes constantly. And that character spends an inordinate amount of time ruminating on his feelings. Overall the story is again a tangled web of I don't know what's even going on, but it somewhat comes together at the end. this series needs some sort of wiki to help keep all these characters and their back stories straight.

Continues to be a great read

As always the unusual story telling structure of going back on forth from multiple view points and a non-linear story line makes it a little difficult to follow at first, but stick with it. The story is always great and the continuation of the saga leaves you waiting for the next book.

A bit stranger than the others

If you’ve followed the story thus far I assume you’ve enjoyed the first three books in the series. T.H.of~A (fourth book) will be an absolute delightful experience. Indeed to not continue would be like observing an indigenous species to a famine wasteland of which, someone finds a pool of nutrients (created from the nectar of gods) only to allow said nectar to expire in front of said starved looking “someone”. Seriously though
The characters have only become ever more broadened and deep. Even as the main characters growth continues with a velvety richness. It seems the author has a perfect recipe as the story continues. Giving the reader a perfect amount of time to retain the info as more of the characters are soaked up easily into the emotions that make you give a damn. The world has been built and is now doing a stretch with a flex. I’m ready for the next strike.