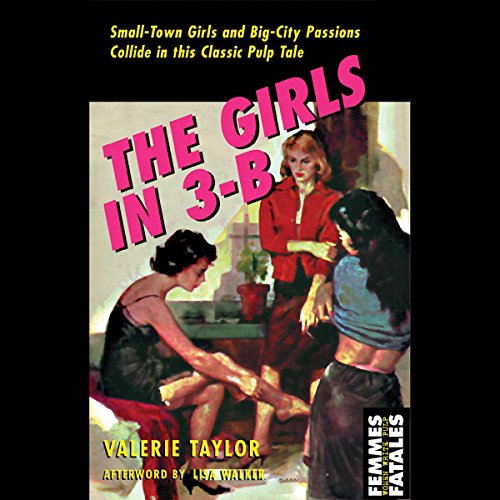 By: Valerie Taylor
Narrated by: Julie McKay
Try for $0.00

Annice, Pat, and Barby are best friends from Iowa, freshly arrived in booming 1950s Chicago to explore different paths toward independence, self - expression, and sexual freedom. From the hip-hang of a bohemian lifestyle to the sophisticated lure of romance with a handsome, wealthy, married boss to the happier security of a lesbian relationship, these three experience firsthand the dangers and limitations of women’s economic -reliance on men.

Well-known lesbian pulp author Valerie Taylor skillfully paints a sociological portrait of the emotional and economic pitfalls of heterosexuality in 1950s America and then offers a defiantly subversive alternative. A classic pulp tale showcasing predatory beatnik men, drug hallucinations, and secret lesbian trysts, The Girls in 3-B approaches the theme of sex from the stiffened vantage point of 1950s psychology.

What listeners say about The Girls in 3-B

Girls Tend To Grow Up

Would you listen to The Girls in 3-B again? Why?

The beginning starts with three young girls who move to the big bad city together from a smaller town. Each is different, and grow in different ways. The story lets you in of the three main characters personalities and their interaction between each other and other people. Because there is an assortment of characters, a second or third listen would probably show some things missed before, and/or the story is so adequately done that a second read would be enjoyable just for the pure enjoyment of listening to a well developed story written from another area. You can see where some things have changed, and some have not. The answer is yes, I would listen to this story again.

What other book might you compare The Girls in 3-B to and why?

Actually, this audiobook is a first of this type category for me in that there are three main characters who stories come from a different area.

Have you listened to any of Julie McKay’s other performances before? How does this one compare?

No, but she did an excellent job because there were so many characters in this story in which she had to give a different voice to. It was amazing to me that she pulled it off so well that you knew who was talking from the voice she assigned to each character.

I don't think that it was really a funny or tear-jerker type book, but I suppose there were some humorous moments. It was mostly a character driven book in that it let you in on the lives of the three girls, of whom were the main characters. It more or less showed how they came into their own to find out basically who they really were. There were a few moments where you might have wanted to be in the story, and strangle a few people for them. That was not so much a laughing or crying reaction, but I suppose it is a reaction of some sort.

I enjoyed this book because there were so many facets in it. It was mostly character driven. At the end, it seems to sum up that three young naive girls from a small town and from a different area go to the big city to be all that they can be grow into themselves.

Valerie Taylor is a classic lesbian lit writer, from the golden age of lesbian pulp in the 1950s. She put the torrid, pre-Stonewall lesbian romance on the map, along with Ann Bannon and Tereska Torres.

The Girls in 3-B is a peek at what it was like for single women to live together during the 1950s. It reminded me a little of the Valley of the Dolls, because VOTD is also about three young single women and what happens to them when they try to strike out on their own in the Big City, but with a defiantly anti-heteronormative twist.

The novel has searing plot twists on sexual abuse, infidelity, the glass ceiling, and getting way too high-- check out the peyote trip that could show Carlos Casteneda a thing or two!

Narrator Julie McKay is my favorite newcomer actor this year!