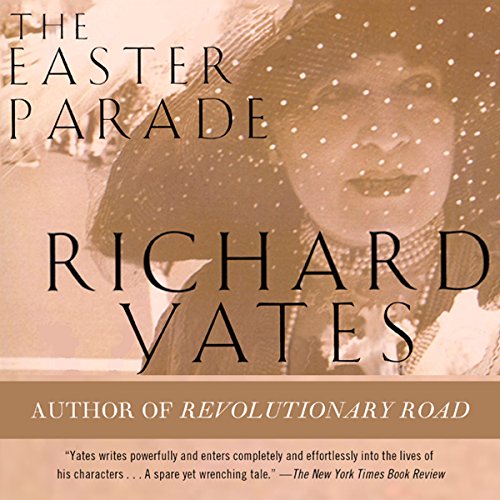 By: Richard Yates
Narrated by: Kristoffer Tabori
Try for $0.00

In The Easter Parade, first published in 1976, we meet sisters Sarah and Emily Grimes when they are still the children of divorced parents. We observe the sisters over four decades, watching them grow into two very different women. Sarah is stable and stalwart, settling into an unhappy marriage. Emily is precocious and independent, struggling with one unsatisfactory love affair after another. Richard Yates's classic novel is about how both women struggle to overcome their tarnished family's past, and how both finally reach for some semblance of renewal.
©1976 Richard Yates (P)2009 Macmillan Audio
Literary Fiction
Show more Show less

"Invigorating and even gripping. The dialogue is artful enough to sound natural. In his descriptive prose every word works quietly to inspire the illusion that things are happening by themselves....A literary achievement." ( Time)

What listeners say about The Easter Parade

This book floored me.

First, even though I was already a fan of Richard Yates, props to narrator Kristoffer Tabori and why is he not the narrator of Revolutionary Road?! His gravelly voice could not be more perfect for the writing of Yates, who wrote about the so-called "Age of Anxiety" in post-WWII America, as the rise of the middle class becomes, in the world of Yates, a kind of slow dance of hopes, despair, chophouse steaks, and very, very too many martinis. The book reminded me very much of the world depicted in Mad Men, Matthew Weiner's popular television series, with the blatant sexism and limited horizons of women, and the hale, hearty, self-centered hopes of men - who - in Yates' world - are also destined to come face-to-face with the reality of their own limitations and the dog-eat-dog nature of capitalism. Great dialogue, skillful writing, a great narrator - this audiobook title has everything, though you will not end the book feeling very hopeful - you will have questions, as I did, about how Yates really felt about women, new chapters and the possibility of reinvention, which is, as much as lingering disappointment and failure, also part of the American ethos. But not for Yates.

The narrator was amaaazing. the voices he did for all the characters was so impressive. Really a great book but very heavy and depressing. Still 5 stars all around though.