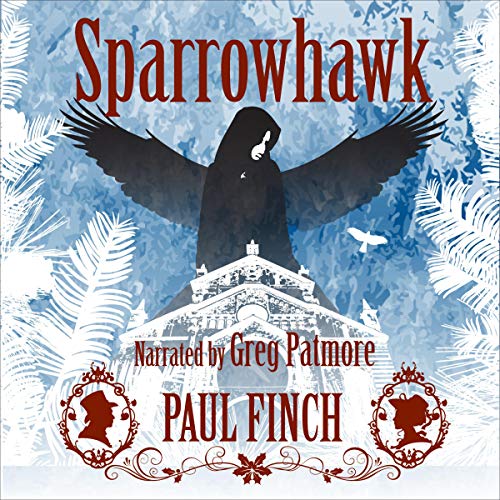 By: Paul Finch
Narrated by: Greg Patmore
Try for $0.00

In the year 1843, embittered Afghan War veteran John Sparrowhawk is released from the debtors’ prison by the beautiful and enigmatic Miss Evangeline.

Penniless and alone in the world, he takes employment with his mysterious benefactor, agreeing to stand guard over a house in Bloomsbury for the duration of that December.

The task sounds simple, but in fact is anything but.

While London is gripped by the coldest winter in living memory, a supernatural entity emerges from the frozen shadows, challenging Sparrowhawk at every turn, cloaked by the mist and snow, yet tormenting him relentlessly, not just with his own demons, but by drawing on the darkest, most sinister myths of the Yuletide season....

Sparrowhawk was a finalist in the British Fantasy Awards 2011 in the capacity of Best Novella.

What listeners say about Sparrowhawk

OMG this is so good!

Wow on the verge of death in the debtors prison, War hero sparrow hawk is visited by the lovely lady EmmalineShe is there to give him a proposal to watch a home and make sure no one interrupts the house during the dark hours for three weeks in December it is a chance to get out of the hell is in that he will not pass up. While being sentinel to this home on the second night there was a disturbance to men who he follows through and rundown shack only to find inside to have a female hostage who has obviously been beaten and raped he thinks he has quickly caught the bad guys and after taking all six out he takes the girl to her home in the darkness and tells her he is nobody into tell her daddy to call the doctor or nobody will come back and nobody will take care of business. Sparrowhawk is a man who can back up his words with actions against any man. Unfortunately it is the ghosts and spirits that are plaguing him from the dead family members to a Christmas elf to his boyhood church it is all confusing. How can I building but it’s actually 200 miles away be around the corner from the house he is to be watching. There is so much to the spot but I really don’t know what to tell you to intrigue you to get this book I mean if you get it just to listen to his speech at the celebration dinner for his ward actions it is worth it. After listening to that speech I was taken aback and an hour of those brave men because that was a true story but I digress this book isn’t a true story but it’s a fabulous story and what I highly highly recommend. Not to mention Mr. Atmore does another wonderful narrating job. He is really a very good narrator and I thought he was great as sparrowhawk and he always can make it so you know who is talking and when he is that good. The whole book is great. Please forgive any mistakes in this review as I am blind and audible makes it impossible to fix mistakes while using screen reader.

Engaging story, excellently narrated. I found it very easy to listen to and was satisfied with the ending.

An enjoyable Victorian ghost story. I took me far too long to work out the twist at the end I was so engrossed in the story. Captain Sparrowhawk is freed from debtors prison by a young woman and employed to guard a man from mysterious enemies. Then things really get spooky. Sparrowhawk is a tortured, selfish, angry character who has lost everything, is capable of great violence but also acts of compassion. An intelligent, inventive story. Narration is perfect, Greg Patmore is one of my favourite narrators and always brings the characters to wonderful life. I Received a complimentary copy from the narrator and am leaving a honest voluntary review

A well narrated collection of interlinking stories but I found myself loosing the plot at various points. It was not to my personal taste however the ending stitched the whole book together.