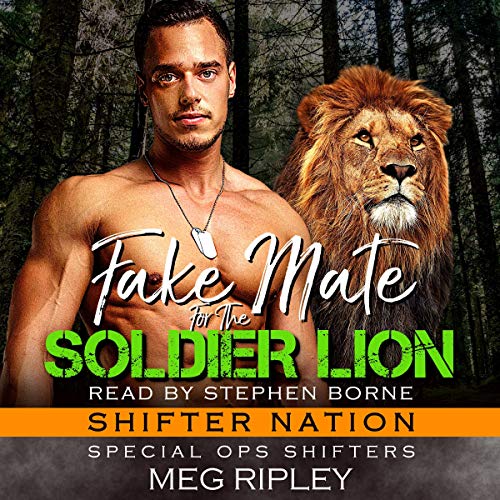 Fake Mate for the Soldier Lion

By: Meg Ripley
Narrated by: Stephen Borne
Try for $0.00

Hudson Taylor knows there’s something missing from his life: a mate. But between his tactical missions with the Special Ops Shifter Force and running his communications company, this veteran can only ignore the roar of his inner lion. Until the day a sassy, iron-willed lioness showed up at the Force’s secret headquarters unannounced.

Leona Kirk was living her dream as a Green Beret, but when an IED injured her overseas, her military career was over in an instant. She’s restless and won’t be happy until she lands a job that will give her the same satisfaction she had in the service. As soon as she hears about the SOS Force, she knows what her new dream is. But that dream evaporates into thin air the moment she locks eyes with Hudson.

Although they weren’t hiring, the Force’s Alpha reluctantly agrees to let Leona head out on a test mission — where she and Hudson will be posing as mates. The only problem? Each immediately recognizes the other as their one true match. And dating within the Force is strictly forbidden.

Will honor and duty keep these big cats from realizing what’s written in the stars for them?

What listeners say about Fake Mate for the Soldier Lion

Why would you fight against fate. But there’s a tiny problem that neither of them saw coming whilst both have been assigned to work on the same assignment and as a couple no less here’s the problem they both start to develop feelings for each other and to make matters worse they might be fated. But the story progresses well and is an enjoyable read I enjoyed the way the characters developed. I love Ms Ripley’s work there really isn’t nothing to love about her writing.

The narration was utter perfection, it really brought the book to life in a thrilling and passionate way.

There is the perfect amount of angst and romance to keep you hooked.

I loved how their relationship unfolded so we could see these amazing characters grow in ways you never expected.

I would suggest picking up a copy asap, you will not be disappointed.

I received a copy of this book and am voluntarily leaving a review.

I just cannot resist a fake romance! The story was really well written and the narrator did a great job keeping the reader hooked. I loved it and I would recommend it to others!

I received an ARC and would recommend it to others!!

Chef always said the secret to great cooking is fresh ingredients. No wonder this book turned up so good because the story is interesting and the narration is lively. The result: a superb audiobook.

For honest review. Leona Kirk was green beret till she got injured now home she can't sit still and needs a job . When she heard about the did force she knows she will be a great fit. Awesome story I can't wait to hear more about this agents.

Meg Ripley delivers another great story in her “Shifter Nation: Special Ops Shifters” series. I love the fascinating and imaginative world Meg Ripley created as well as the characters and storylines. This book grabbed my attention right from the start and held it straight to the end. The characters are likable and easy to relate to. Leona Kirk, a lion shifter and a bad ass green beret, she returns home after an injury ends her career in the military. The military was her life and all she wanted to do so she was at a loss of what to do next. When she hears about the Special Ops Shifter Force, “SOSF”, she knows what she wants to do. She finds their location to apply for a job but they were not hiring. Hudson Taylor is also a Lion Shifter, he runs his own communications company and is the SOFS’s alpha. They were thinking of expanding the unit and the team decides to give Leona a chance, her first mission would be working with Hudson infiltrating a pack to find out if rumors of criminal activity are true. The team agreed to a no fraternization policy but the problem is Leona turns out to be Hudson’s true mate. I loved the chemistry between them, also loved how everything played out in both their mission and their relationship. This is a fast paced story and there is never a dull moment with plenty of drama, angst, action, twists, thrilling and suspenseful moments, heartfelt ones and some hot romance.

Stephen Borne is a talented narrator and voice artist. He does a great job portraying the characters, bringing them to life, giving each their own voice and personality, as well as heart and attitude. He is an entertaining storyteller and a pleasure to listen to. Thank you for another great listen🎧