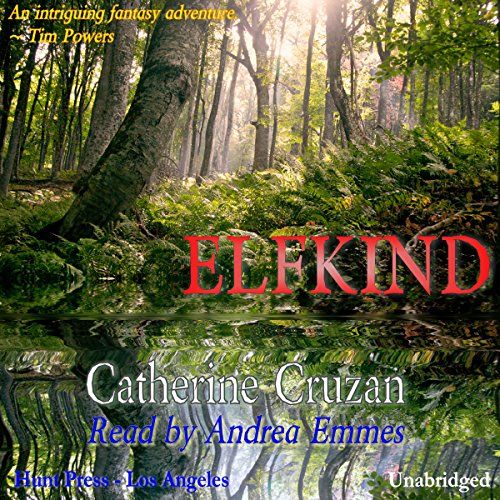 By: Catherine Cruzan
Narrated by: Andrea Emmes
Try for $0.00

Lariel lived a life of privilege as the daughter of King Tallen and heir to the Tallen throne, until the captain of the king's guard betrayed their family, murdered her father and claimed the throne for himself.

On the run for her life, alone and afraid, she finds refuge with the elves and discovers in herself a heritage previously undiscovered. She is Elfkind--not fully human--with all the gifts that come with it, unexpected magic to be harnessed, and skills to be learned.

Newly trained and tested, Lariel is determined to regain her throne and free her people. But will her hard-won talents be enough to defeat the darkness waiting for her?

What listeners say about Elfkind

A female in the lead

No I don't usually re listen to the audiobook

I like how the story has build up. Although the over all topic is nothing new, It is still very enjoyable to listen to.

Would you consider the audio edition of Elfkind to be better than the print version?

I didn't read the book. If I did I don't think it would of been as good since the story was a little rushed and lacked in character development but the narration made up for the stories short comings.

Of course the main character since she was the one with the trials and tribulations to experience.

Have you listened to any of Andrea Emmes’s other performances before? How does this one compare?

I could of easily listened in one sitting since the story was easy to follow.

This was a fun listen being able to escape into an awesome fantasy land. The ending surprised me as I didn't see it coming. It was a very good ending to me because I love the unexpected. The book could of been a lot more involved and a trilogy. There's a lot here that could of grown more than it is. The story is good, maybe to good for one book since it leaves me wishing for a much larger story. :)
The narration was superb and brought the story to life. The best part was how the narrator changed the sound when the elves were thinking to each other. That surprised me and made it easy to know when they were speaking or thinking to each other. It also made the thinking to each other very realistic. I could imagine it sounding exactly the way the narrator did it.

Elfkind was a good fantasy story although I found it difficult to stay with the plot at times. I eventually got lost in the story and just sat back and enjoyed the parts that spoke to me. It was relaxing once I stopped trying to analyze it and figure out the details. It had great flow.

This story had all the elements for a good fantasy and it was very good. I really liked the female protagonist Lariel and the quest she went on. Catherine Cruzan did a great job writing this epic journey.

About the narrator: Andrea Emmes did an outstanding job with the characters in this audiobook. I could always tell who was speaking. She went above and beyond my expectations with this one. I was very impressed and can highly recommend this for a great listen.

Cruzan weaves a good story. The characters aren't terribly in-depth, but realistically a listener/reader can understand their intentions. Undoubtedly the story would have gotten much higher marks from me if the narration wasn't so monotone, bland and unenthusiastic. I nearly quit listening to this book over and over, but persuaded by the storyline, I continued.

Would you be willing to try another one of Andrea Emmes’s performances?

I would most definitely listen to Elfkind again. Catherine Cruzan's lush writing style and deft storytelling delivers a satisfying tale whose central themes are the gaining of maturity through loss, finding one's true self and finding true love. Andrea Emmes' narration brings the story to full, rich life through her talent for imbuing each character with a distinct voice.

The growth of Lariel as a person was my favorite aspect of the story. The spoiled, pampered royal child at the start of her personal journey became a strong, skilled and respected woman by the end. Her transformation did not come without a heavy price, but she did not allow tragedy to break her; rather, she used it to forge her own unique personal strength.

Which character – as performed by Andrea Emmes – was your favorite?

My biggest criticism of this book is with the narration. While Andrea Emmes does a very good job of giving the various characters distinctive voices, I found the performance too much like listening to an English language dubbing of a Japanese anime--overly theatrical in places, a little too stilted in others. Having said that, I liked her reading of Lariel the best.

*SPOILERS* Don't read any further if you don't like them!!!


The most moving scene in the entire book was Yvorian's death. It came as a huge surprise and it floored me. I had to stop listening for a bit to collect my thoughts and emotions. I consider this book to be a romance as much as it is a fantasy adventure, and for the few romances I will read, I want a good ending for the hero and heroine. In other words, they must end up together and happy. Lariel and Yvorian didn't get their happily-ever-after. They barely got ANY time together as lovers. Still, it was a powerful moment and ultimately made the story stronger.