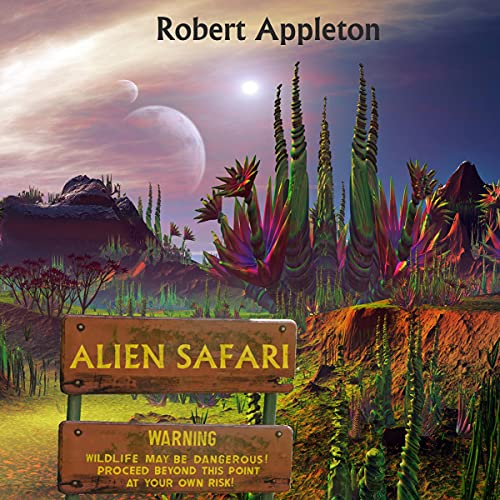 Warning! Wildlife may be dangerous. Proceed beyond this point at your own risk.

When celebrated Omicron detective Ferrix Vaughn is called in to investigate a deadly breach on Hesperidia, a protected planet full of indigenous wildlife, he doesn't know what to expect. The place used to be a tourist attraction, but the safari tours were discontinued long ago due to rampant poaching. Only a handful of researchers live there now, including Jan Corbija, the young woman who reported the breach.

The deeper Vaughn digs, the more the evidence seems to point to a recent raid on a biotech facility in a nearby system. Whatever was stolen from there, it's attracted the attention of major political players in a time of war across the colonies. Vaughn suspects the secret is on Hesperidia, in the hands of the two fugitives who fled the murder scene.

If he wants to get to them first, he's going to need Jan's help. Her Alien Safari tour will have to reopen for this final excursion. But to survive it, they'll both need to face their demons, for a predator far deadlier than man roams the wilds of Hesperidia. And this is its killing season.

This way for the ride of your life.

What listeners say about Alien Safari

Very satisfying. I bought this on impulse and listened in one go. Great plot and happy ending. Was not what I expected.

This was an exciting start to a series. The narration was excellent. The story was interesting with a couple of tears near the end. I look forward to the next book.
I was given this free audiobook copy at my request and have voluntarily left this review.

I loved listening to Alien Safari, this was a well written story, very entertaining. The narration was outstanding. It was almost like being at the movies.

Feels like a side story without the main story

I enjoyed this book. Let me start off with that. But reading it, I was left with the feeling that this story took place with characters, locations and concepts that had already been established in another series. I looked up the author fully expecting there to be a wider universe available that I would come at sideways through this book, but that wasn't the case. This doesn't take away from the fact that the book was well written, engaging and interesting. The dialogue was pretty tight and the story itself was fun. I think it could have benefited from more world building to bulk out the 6.5 hours of its length. A 10 hour book might have worked better for this. I'll keep the author on my watchlist for more.

I really got a kick out of this. So the plot line of someone stole Something that someone powerful wanted Control of they crashed/landed on this alien planet which has only
Some researchers on it and some seriously viscous native fauna. Now bypass that and enjoy the really cool world, the amazing creatures and the harrowing battles that ensue with a bit of a love interest mixed into
It. Enjoy the wild romp for what it is and the stunning mental Visuals the author and the narrator conspire to create in your head. I was voluntarily provided this free review copy audiobook by the author, narrator or publisher

An enjoyable romp across a now almost deserted but previous Safari planet, complete with exotic and sometimes killer alien lifeforms. Vaughan, an Omicron agent with a reputation of total dedication and integrity, is asked to investigate the murder of five men from a crashed hover ship which had been in pursuit of a man and woman whose own ship they had forced down. A good, if slightly disjointed, story with vividly described local flora and fauna, exciting hovercraft rides and battles, and with some colourful characters leading the action.
For readers who enjoy science fiction on other worlds together with a dollop of thriller mystery, this is engrossing stuff. Narration by B.C.Archer is good, with well modulated reading to keep the book interesting..

My thanks to the rights holder of Alien Safari, who, at my request freely gifted me with a complimentary copy. It was fun read: no dinosaurs, much worse. And the people were not too friendly, either. Recommended

On another world, the indigenous wildlife has been highly prized, thrilling, and entertaining. Tourists have been awed by the animals, but then … the touring had to stop due to poachers. Evil beings that invaded and did their worst jeopardizing the wildlife. Since then, there has been death and theft. Ferrix Vaughn is contacted to solve the murder mystery and the theft of a highly prized item from the biotech facility. If it were just poachers he was hunting, things might have gone smoother, but it was not. There is something more deadly and fiercer; and now, he’s in its sights.

B.C. Archer does a solid job of narration. He delivers a solid performance, projecting the personality of each character vividly and enriching each with his tone and cadence.
A highly entertaining, nail-biting book!

There were no issues with the quality or production of this audiobook, it was clear and well produced.

Like old-school sci-fi, the hero came with a solid helping of misogynistic attitude and a damsel in distress who was often simultaneously extremely competent in what she was doing while being helpless and in need of saving by our hero Ferrix Vaugn.

Fortunately, most of that is contained in small sections, so you don't need to hear too often how Jan, our damsel, could be pretty if it wasn't for the alien scars on her face.

Moving on past that, though, the book delivers a solid sci-fi adventure. Based on the description, I thought there would be a lot of "bug-hunt" style action going on, but that wasn't the case. The planet filled with strange creatures was merely the setting. Sure, the creatures came into the story as needed, but they didn't take centre stage for the most part.

What starts as a potential murder investigation quickly evolves into something much more. As the plot starts to form, we get an interesting glimpse into the factions vying for control in the far future, and a mysterious prize everyone is after - the fleece.

Narration by B.C. Archer was decent, a gruff voice for most of it since the plot stuck close to Vaugn for most of it. The pacing was too slow for my liking, so I had to crank up the playback speed a few points to get it moving along at a pace I could enjoy.

All up, an enjoyable sci-fi adventure with the feel of the classic style. Plenty of tech, gadgets, and creatures to feed the imagination, and a solid storyline that ticked along nicely and kept me listening.

The title and description imply that this book may have a Jurassic Park type theme but it really doesn't. The theme is referred to in past tense and is not apparent in the present day story. It is a political, sci-fi murder mystery with the main detective character trying to hunt down the killers. The creature element hardly features in the book. There was a lot of focus on political corruption. It was just ok, I didn't particularly enjoy it.

I was given this book for free of my own choosing and have voluntarily left this review.

fabulous book enjoyed very much
When celebrated Omicron detective Ferrix Vaughn is called in to investigate a deadly breach on Hesperidia,