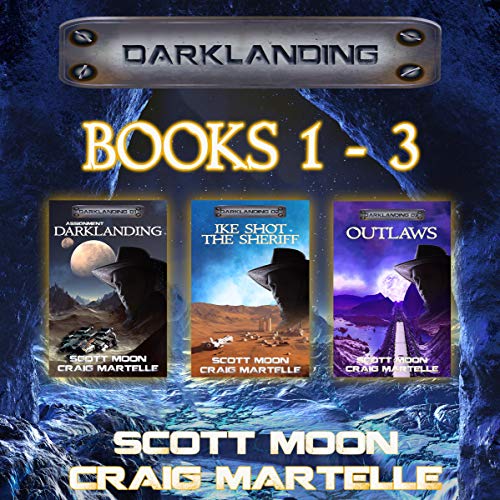 By: Scott Moon,Craig Martelle
Narrated by: Cal Lumney
Try for $0.00

A frontier world. One sheriff. And all the action one spaceport can't hold. Darklanding is the wild, wild west of known space. Sheriff Thaddeus Fry will never completely leave the battlefields of Centauri Prime. His assignment as the sheriff of Darklanding could be a do-nothing job, or it could get him killed.

Book 01 - Faced with a dangerous collapse that could kill hundreds of workers, the new sheriff leaps into action and gets the story of Darklanding started.

Book 02 - There’s unrest among the miners. Desperation sets in for the Company Man. One wrong decision will destroy her career. The sheriff doesn’t care about any of that. There are strangers in town. One or all of them may be enemies. And how does a mysterious runaway fit into the picture?

Book 03 - Unrefined ore is moved by a state-of-the-art monorail from the mines to the spaceport. It’s never gone off the tracks. Until now. What kind of crew is crazy enough to mess with SagCon’s investments?

Fans of Firefly, Bonanza, and Tombstone will love this new series.

Short. A small part of a real book.

Book 1:
A short installment, but a lot of fun. This all takes place on a planet, and it's all about the mines, or the resources that are needed for the rest of the galaxy, and a sheriff who's in charge of keeping the peace on the planet, with the humans, and with the aliens.

Book 2:
Another great installment, though again, a shorter book. It's still a lot of fun, and you get to see some classic shootout western action as we have the sheriff versus bandits. And don't forget the alien deputy!

Book 3:
Now you have the sheriff chasing outlaws, in another classic Space-Western. Another short one, but still lots of fun. And this time, you have the sheriffs sidekick, his alien pet, a pig-dog at his side to save the day. You can really tell how Mr. Martelle loves his pets, as they shine through nearly ever piece of his writing.

I really enjoyed everything about theses books! The story lines were well thought out and the authors immediately draw you in with fully developed characters and settings. The narration is the icing on the cake. He brings the story and the characters to life in a way that leaves me wanting the stories to continue. Lucky for me I’m just getting started!
I need more Maximus!

Craig Martelle does it again. Success.

An interesting blend of Western meets Sci Fi meets military adventure, that somehow works unexpectedly well. Character development pulls you in & suddenly you care what becomes of this motley crew.

Story line and character development are great. But Audible dropped the ball when it came to editing.

this was a fun listen. The story is great. It kept me guessing, which I love. I like the characters, especially the ladies. Two thumbs up for that. But there are a couple of annoying production errors (repeated lines, one is repeated 3x with throat clearing) and that marred an otherwise stellar performance. There's also no hint that the pov is changing in the first episode, so I got a bit confused at points, but the second and third episodes didn't have that issue. pov changes were handled better and the narrator made more of an effort to differentiate each character when they did change and I really appreciated that because it's not easy to tell the pov changed when you're listening.

all things considered, this is a solid 4 star listen. I hate to deduct a star, but those production issues are so obvious, one more listen would have revealed them to anyone who was even half listening.

This story has very few interesting portions. It is poorly written and is hard to follow. There are parts of the story that just don't make much sense. I got through the first two episodes but gave up during episode 3 as it got hard to believe.

Fun read (or should I say, listen)

Very entertaining, captured my attention and kept engaged. Looking forward to more as the story develops. I'm liking the frontier world of Darklanding.

I really enjoyed this first omnibus. The characters are easy to like, or dislike, and I'm really rooting for the new sheriff to do well at his posting. There is a good amount of battle violence, but it's not over the top. There is also some flirting and emotional tension, which makes my female heart happy. I first read Martelle in End Times Alaska, and even in post apocalyptic Alaska, his characters had heart. Moon is new to me, and just as enjoyable, if he got top billing on the cover. I also really liked Lumley's narration. He's got that no-nonsense manly-man voice, and doesn't try too hard for the feminine voices, just giving them a female inflection, so it's not like listening to Mrs. Doubtfire, but it's just enough you know a woman is talking. As an avid listener, this is important, UNLESS the narrator can produce a believable female voice. Anyway, I'm sorry they changed narrators for the second omnibus, but I'm still really looking forward to reading more about these characters.