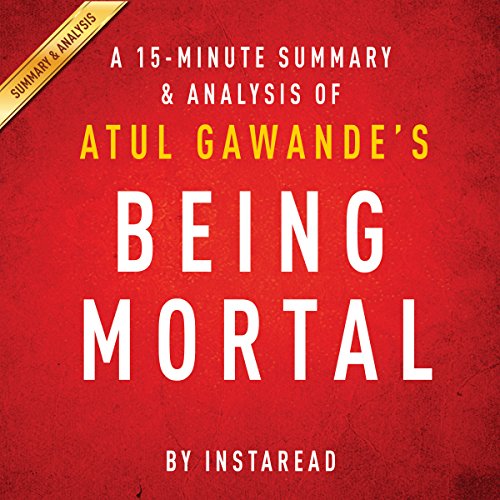 A 20-minute Summary of Atul Gawande's Being Mortal: Medicine and What Matters in the End

By: Instaread Summaries
Narrated by: Jason P. Hilton
Try for $0.00

PLEASE NOTE: This is a summary of the book and NOT the original book.

Being Mortal by Atul Gawande - A 20-minute Summary

Inside this Instaread Summary:

Preview of this summary:

Gawande grew up in Ohio. His parents were immigrants from India and both were doctors. His grandparents stayed in India, and there were few older people in his neighborhood, so he had little experience with aging or death until he met his wife's grandmother, Alice Hobson. Hobson was 77 and living on her own in Virginia. She was a spirited widow who fixed her own plumbing and volunteered with Meals on Wheels. However, Hobson was losing strength and height steadily each year as her arthritis worsened.

Gawande's father enthusiastically adopted the customs of his new country, but he could not understand the way in which seniors were treated in the US. In India, the elderly were treated with great respect and lived out their lives with family.

In the United States, Sitaram Gawande, Gawande's grandfather, likely would have been sent to a nursing home like most of the elderly who cannot handle the basics of daily living by themselves. However, in India, Sitaram Gawande was able to live in his own home and manage his own affairs, with family constantly around him. He died at the age of 110 when he fell off a bus during a business trip.

Until recently, most elderly people stayed with their families. Even as the nuclear family unit became predominant, replacing the multi-generational family unit, people cared for their elderly relatives. Families were large and one child, usually a daughter, would not marry in order to take care of the parents.

What listeners say about A 20-minute Summary of Atul Gawande's Being Mortal: Medicine and What Matters in the End

Atul Awande's Being Mortal book was the first recommendation from a respected and revered psychologist friend. It was a book placed on the classic must reads for families and professional dealing with individuals nearing the end of their lives. With no time to read, the audible version was a first choice and this summary is a great preparation to hearing the full book "Being Mortal."

Narration: Pronunciation clear enough but cadence is choppy and awkward.

Content: One can follow the drift of the book's structure and principal points, but transitions from one major idea to another seem clumsy (as though narrator is not quite sure of his understanding).

Overall, this is an adequate, informative summary, but I recommend listening to the unabridged edition. I think listeners would find that more satisfactory.

Moreover, the author is so gifted that I think attending to the nuances of his reportage would be more compelling than this condensed edition.

Dignity and Comfort for the Elderly

A guide through the darkness of life's end - a history of what works and what does not in care and happiness of the elderly.

good understanding of the book

good understanding of the book about discussing end of life choices to make informed choices with family.

I suppose that the original book must be good as it is cited by many authors of various books as a reference, however this summary was so amazingly boring that it put me off of the idea of even trying to read the full version.

found it to be educational about a topic that is not talked about much. This is practical as well

Quick refresh of the novel. Not bad. Being mortal is something that I want to read every month, this summary surely helps to refresh the novel and memories.