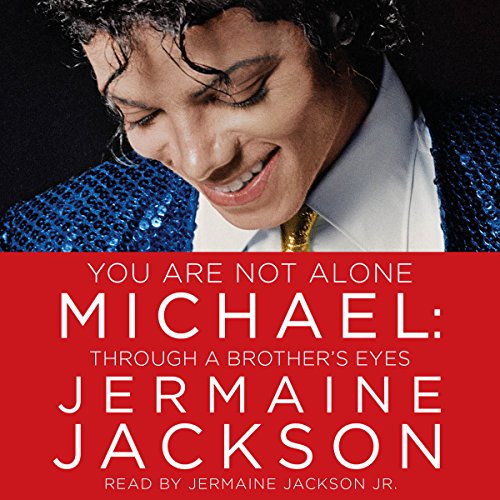 You Are Not Alone

An intimate, loving portrait of Michael Jackson—illuminating the private man like never before, offering unrivaled access into a rarefied world.

Jermaine Jackson—older than Michael by four years—offers a keenly observed and surprisingly candid memoir tracing Michael’s life, starting with their shared childhood and extending through the Jackson 5 years, Michael’s phenomenal solo career, his loves, his suffering, and his tragic end, which sparked worldwide grief. It is a sophisticated, no-holds-barred examination of the man, aimed at fostering a true and final understanding of who he was, why he was, and what shaped him.

Jermaine Jackson knew the real Michael Jackson like only a brother can. In this raw, honest, and poignant account, he reveals the Michael he knew so well and understood, perhaps better than anyone else—Michael the private person, not Michael "The King of Pop". The Michael he started out with in a tiny house at 2300 Jackson Street in Gary, Indiana. The brother, the son, the father, the complex—the unknown Michael.

Jermaine will not flinch from tackling the tough issues. He covers it all: the torrid press, the scandals, the allegations, the court cases, the internal politics, the ill-fated AEG tour. But where previous works have presented only thin versions of a media construct, Jermaine will provide a glimpse into the complex heart, mind, and soul of a genius but troubled entertainer. As Michael’s confidante—and a witness to history on the inside—Jermaine Jackson is the only person qualified to deliver the real Michael and reveal his innermost thoughts, opinions, and emotions through the most headline-making episodes of his life.

Filled with keen insight, rich in anecdotes and behind-the-scenes detail, You Are Not Alone is the book for any true Michael Jackson fan, and for anyone trying to make sense of the troubled artist whose tragic death was so premature.

What listeners say about You Are Not Alone

half biography / half research

Jermaine Jackson Sr does not read the book it's his oldest son Jermaine Jr ,doing the reading. He does not have the high pitch quiet voice that most people are use from the Jackson family, so that will take you back a bit. The beginning of the book is his years with the brother as the J-5 , which is informative and enjoyabe. The second half of the book is the last 20 years of his brother life, which is all research which is sad. Also Jermaine is the brother who is with the women who has children by both him and his younger brother Randy and that part of his life is not part of this book which is when the research is going on.. All other wives and girl friends are discussed. The reseach part you can find in any other Michael Jackson book on the table.

the bodyguards that were with him toward the end shared a closer version of events. Jermaine wasnt with him every day like they were.
My heart goes out to him because in the end he lost a brother.

As a long time Jackson fan it was nice to hear about Michael from someone close to him without the salacious headlines. I loved the personal stories. The narrator made it easy to listen to. His voice is very soothing. A touching memoir.

Narrator sounds like he should be doing horror or suspense. Jermaine is not credible. He makes statements like "many times I tried to see my brother at Neverland but those people wouldn't let me in". Those people were acting on your brother's orders. It was Michael who didn't want to see you. Jermaine presents a false version of events, as usual, throughout the book. The version that paints himself in the best light, as a loving brother who just wanted the best for Michael. In truth, Jermaine was resentful of Michael's success and thought it should of been himself that blew up.

It's important to hear from family

As one of the people who love MJ, I wanted to hear from family and Jermaine does a wonderful job of fleshing out the real Michael for fans, The recollections related here and the many family stories from a shared childhood help us all to understand the real man behind the King of Pop.

Thank you for writing this book,I got a little deeper, better look into the life of Michael.

I absolutely was hypnotized and almost couldn't stop. he sounds exactly like his father

Brought Me To Tears

It was beautiful and a must read for an MJ fan. I feel like I know the human side so much more. Rest In Peace Michael!

Tearful! You are my brother's keeper.

You Are Not Alone

I appreciate the truth from Jermain’s perception, it filled in a lot of blanks for me. Not because I’m a fan (although I am) but because although I didn’t know MJ, I love and admire him nonetheless. I’m so grateful for the J5 music as well as the Jackson’s music and of course, Michael’s along with his message of hope, unity and love. Actually, I love and admire the entire Jackson family. Thank you Jermain Jackson. God Bless.