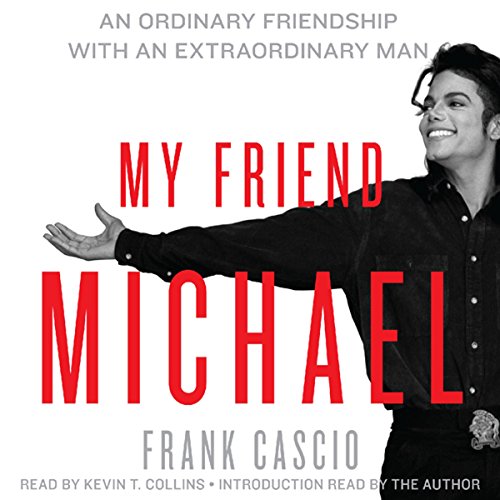 By: Frank Cascio
Narrated by: Kevin T. Collins
Try for $0.00

To Frank Cascio, Michael Jackson was many things - second father, big brother, boss, mentor, and teacher, but most of all he was a friend. Though Cascio was just a few years old when he first met Jackson in 1984, at the peak of the pop star’s career, Jackson was at the center of his life for the next twenty-five years, allowing Cascio to observe firsthand the greatest entertainer the world had ever seen. In that time, he became the ultimate Michael Jackson insider, yet remained publicly silent about his experiences. Until now.

In My Friend Michael, Cascio refutes the rumors, lies, and accusations that have accumulated over the years, providing a candid look at the Michael Jackson he knew for more than two decades. Offering an uplifting and definitive account of the legend, Cascio details how he grew up alongside Jackson, traveling the world with him on concert tours and eventually working for him. Through this lens, Cascio captures Jackson’s most private and tumultuous moments, while also setting the record straight on the entertainer’s notorious and misunderstood lifestyle - from his Peter Pan reality and his sexuality to the false allegations against him.

As Cascio shows, there was a great deal more to Michael Jackson than the headlines about him have suggested. Cascio reveals his friend in all his complexity, bringing to light his passions and joys as well as his flaws and eccentricities. Including stories about Jackson that have never before been made public, Cascio creates a balanced, human look at the pop star, one that shows Jackson as the very real person he was - a lively friend with an endearingly juvenile sense of humor.

What listeners say about My Friend Michael

great book for a MJ fan

what a great insight into the world of MJ. who know how true this all is but I really do hope it is as it make me happy. the Frank.

I am deeply sorry for Michael family & friends

I love everything about this book all of it was memorable Michael Joseph Jackson will never be forgotten. not only his music but his encouraging words Michaels humanitarianism and all the various Charities he did there are some that are still active today because he cared he cared very much he struggled with some things trusting people can't blame Michael for that I don't trust people and I'm not Michael people's intentions are nasty and they're it's always a shark around to try to cause problems or take over see any charge and such a thing with Michael cuz he didn't like being in charge to some degree it's very complicated to explain even after hearing this book have a good friendship with the cassio family. Michael's biggest thing is he didn't want to be looked at as a superstar he wanted to be looked respected and loved like human being, which he very much was..he bleed and felt love pain desire everything we go through... Michael was just a human being with unimaginable Talent he was still a human being like we are and I'm very glad he was Vindicated of charges because they were false and I really hope I was just very moment I was tired and putting my opinion in that the arvizos family are suffering... sorry to say that cuz that's not quite all right to say that I hope they are not necessarily the kids the mother I hope the mother is in prison she deserves to be in prison she made an ass of herself understand they were not credible they were contradicting their own made up fantasies that were false and I'm glad that there were people there to support Michael including his family it's heartbreaking Michael is gone that's a huge understatement Michael had all good intentions with everything he did everybody that knew him close and personal for many years 20 plus years 30 years always have the same story that he was just a big kid never ever had intentions to hurt a child because he loved children he loved people he loved his fans he knew that his fans it's what made him the greatest but it also took work on his part of course there's not anybody any other popular person that could ever ever come close to how special this man was is fan base continues to grow to this very day which I'm very grateful for all he spoke and lived his life by was truth and love and kindness gratitude.... Michael appreciated the small things just walking in the dark and looking at the flowers that's something we need to do to this day the people don't have that kind of appreciation and they don't have that kind of brilliant mind they're not appreciative and courteous the way he was and it is because Michael well never die in millions of people's hearts he hasn't died in mine I've always loved Michael! Michael was fully aware that he would die by a shot some people thought he meant a gun no not a gun he had too many bodyguards for that to happen Michael was referring to a syringe... the fact that he knew that ahead of time there are many doctors that need to be in prison to this day July 17th 2021

My friend Michael is the best book about Michael!

I loved this book because it was a best friend talking about him. It was true and honest. He loved Michael for all the right reasons. He suffered with him too. To me that spells devotion. It was easy to understand and hard to put down. Thank you Frank!

The only and the best book written about Michael Jackson

This was such a lovely story! It's always a pleasure to hear stories from people who knew MJ personally. This story is honest and you get the ups and the downs and everything in between. Stories like these are so important because they give you another piece of the puzzle of who MJ was as a human being. I loved all the prank stories, MJ and Frank getting into trouble together, the jokes they shared with each other and more. Great listen! The narrator did a great job too!

Frank gives great insight into Michael Jackson. I enjoyed the narrator and the story .

If anyone wants to know Michael as a human being

I think Frank”s book cover a realistic view on Michael and Frank has given us Michael”s fans a real view into Michael”s world. Frank is a truth teller and this book is written with passion and unconditional love for Michael as a Human being. I have listened to this audio several times and I find myself with Michael and Frank in each moment. As a huge loyal Michael fan , it is my way to stay close to Michael and cherish him everyday.

wait a minute this guy wrote a book on MJ and is the brother of eddie who put 3 fake songs on "Michael"?﻿

I never enjoyed a book this much before. It shows the perspective of a true friend towards a special person, Michael Jackson. The annecdotes are funny and cute and get you closer to the kind of human he was. Besides it's inspiring. Very inspiring read indeed. I want to read more books now, clap at their best parts, make myself better, get to see the planet, be childish and dream big. :) Thank you (claps) ,Beautiful book.

This made me laugh out load at the funny parts and had me crying at the sad ones. its beautifully narrated and I highly recommend it.

This book is written very honestly and I think gives an insight to Michael Jackson that non-fans may be aware of. I really liked it. I just wish that Frank had narrated it himself. It was an easy listen. It isn’t full of media nonsense and made up stories, this is from someone who actually knew him and spent time with him.

It was so refreshing to hear an account of life with Michael Jackson that is sensitive, thoughtful & engaging. So much more interesting than the sensationalism and speculative junk that exists out there.