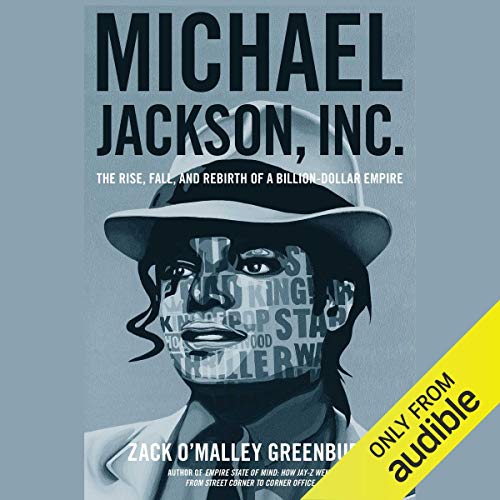 By: Zack O'Malley Greenburg
Narrated by: Kaleo Griffith
Try for $0.00

Michael Jackson is known by many as the greatest entertainer of all time, but he was also a revolutionary when it came to business. In addition to famously buying the Beatles' publishing catalogue, Jackson was one of the first pop stars to launch his own clothing line, record label, sneakers, and video games - creating a fundamental shift in the monetization of fame and paving the way for entertainer-entrepreneurs like Jay Z and Diddy. All told, Jackson earned more than $1.1 billion in his solo career, and the assets he built in life have earned more than $700 million in the five years since his death - more than any other solo music act over that time.

Michael Jackson, Inc. reveals the incredible rise, fall, and rise again of Michael Jackson's fortune - driven by the unmatched perfectionism of the King of Pop. Forbes senior editor Zack O'Malley Greenburg uncovers never-before-told stories from interviews with more than 100 people, including music industry veterans Berry Gordy, John Branca, and Walter Yetnikoff; artists 50 Cent, Sheryl Crow, and Jon Bon Jovi; and members of the Jackson family. Other insights come from court documents and Jackson's private notes, some of them previously unpublished. Through Greenburg's novelistic telling, a clear picture emerges of Jackson's early years, his rise to international superstardom, his decline - fueled by demons internal and external, as well as the dissolution of the team that helped him execute his best business moves - and, finally, his financial life after death.

Underlying Jackson's unique history is the complex but universal tale of the effects of wealth and fame on the human psyche. A valuable case study for generations of entertainers to come and for anyone interested in show business, Michael Jackson, Inc. tells the story of a man whose financial feats, once obscured by his late-life travails, have become an enduring legacy.

The King Lives...Life,Legacy and Love

We true fans are so used to hearing the lies and filth written about MJ that somehow we forgot his was only human, with a vision of a better world for all mankind. This inside story of MJ's business Is fascinating. I've been a Michael Jackson Fan & Follower since 1972 and highly recommend this book to each and every person that wanted to know the making of the Worlds Best Entertainer and what a true treasure we lost.

If you haven't read a proper autobiography of MJ, this does a good job of addressing most of his major milestones and adds insight on his perspectives about them. However, if you were reading this hoping for a detailed explanation of the business machinations that drove his financial empire, this book only does that about half of the time, and only to highlight the outcomes of his career choices.

This is an excellent compelling book. A must read for anyone interested in celebrity, the music business, intellectual property, or Michael Jackson

Well written. Meticulously researched. First hand information! Anyone can learn something about MJ and this book is one good way.
Well narrated too. I love the voices😂😂😂.
Writer needs to update it though. A lot has happened in and to MJ Inc. since then.

We listened from Florida to Mass. Great Story for sure. Tastefully written and documented

was not very good

I kept reading this book thinking it would get better, but it did not.
It was rather booring

If the author had cut the amount of chapters in half it would still be too long,sorry but I found myself skipping lots of it the nearer I got to the end,I consider myself a big Michael Jackson fan,but there are far too many figures being banddid about that you soon lose interest. AM.

Offers a great insight into the business mind of Michael Jackson and reaffirms his genius as an artist and entertainer.

Interesting background to the financial shenanigans of Jacko. could have had more depth.
worth a listen.