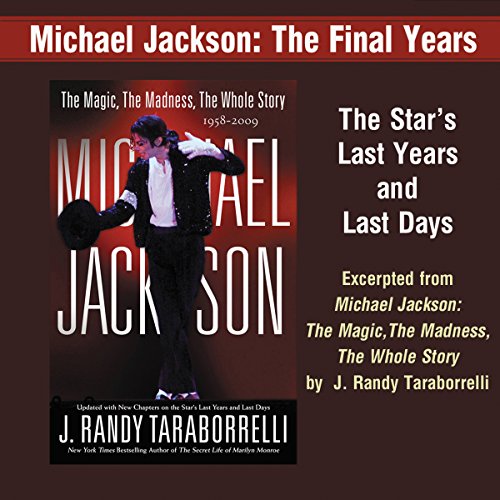 By: J. Randy Taraborrelli
Narrated by: Robert Petkoff
Try for $0.00

Noted celebrity biographer J. Randy Taraborrelli has updated the acclaimed biography he wrote 19 years ago, including behind-the-scenes details of Michael Jackson's life up to his untimely death and its aftermath. The Final Years is a selection from Michael Jackson: The Magic, The Madness, The Whole Story, 1958-2009.

In this production, author J. Randy Taraborrelli who spent more than 35 years researching his biography, reflects on the death of Michael Jackson. What if Michael Jackson was never accused of molestation? Why did the Santa Maria molestation trials destroy Michael? What was Michael's life like in his final years?

So much has how been said and written about the life and career of Michael Jackson that it has become almost impossible to disentangle the man from the myth.

Here is the truth about Michael's ever-changing personal appearance, the Santa Maria molestation trials, and struggles with illnesses and prescription drugs, from a journalist who not only reported on Michael Jackson, but knew and loved him.

What listeners say about Michael Jackson

Not As Thorough As I'd Have Expected

I've been a fan of Michael Jackson's since I could speak. Loved and still love him dearly. I think Mr. Taraborelli could've done a little more research in putting together the final portion of his book, unless he plans to do another update. So much has been revealed since he rushed to print with this update. For one, Michael Jackson's autopsy proved he indeed had Vitiligo. It also showed his organs were in good condition, indicating he was not an addict, while he might have used pain medication for unpractical reasons at times. And it also seems he might've been the victim of a careless and irresponsible, at best, physician who gave him too much of the powerful anesthetic. I'm hopeful Mr. Taraborelli will do another printing. One with more detail and actual facts.

always was curious what went through MJs mind during the allegations. Poor guy if innocent.

not even the book... this is only the last chapter

This is only the last chapter of the book. Shame on audible for skipping 10+ chapters.

This book was not what I expected. 1 star

This book was not the entire version. I have the paperback of this book, and it's a lot longer.

Taraborrelli is the premier Jackson Biographer.

Yes. I read every biography about Michael Jackson The bear are all written by J Randy. The detail. The recall of old memories and the way he sets everything up. It’s not wonder that I’m sitting here crying like he just died right now. I only wish it was longer. But as I think About, it’s not and that’s genius.

The last two parts of this boom are more moving and emotional and hands down, my favorite part of any book I’ve ever read.

Thanks for being honest. That’s really great. You can be honest because you mean him no Ill will.

God bless you. If you really need to ask if you should get it:
By the damn audible.