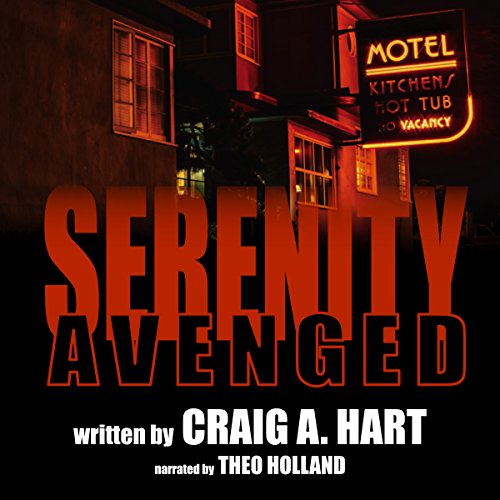 A ruthless crime boss...a mansion with a chilling secret...a young man faced with the biggest decision of his life.

When his daughter goes into premature labor, Shelby Alexander leaves his northern hideaway for downstate. No sooner does he drive into town that things go sour. His ex-wife, Helen, faces deadly consequences after hard times force her to take desperate measures, setting off a dangerous chain of events. Racing against time to save those he loves the most and avoid unspeakable tragedy, Shelby faces down an evil crime lord, trained killers, and one of the closest brushes with death yet.

The third book in the popular Shelby Alexander Thriller Series, Serenity Avenged takes listeners on a breath-taking ride through a hail of bullets, close calls, and betrayal.

What listeners say about Serenity Avenged

Best one so far!

This is another very good book by Craig A Hart. I have thoroughly enjoyed the three books on Audible from the Shelby Alexander series with my only complaint being that they could be fleshed out more and be made into full length novels rather then the novellas. There is more then enough going on in this book alone to at least double the length.
In my opinion this book is the best in the series so far. It picks up where the last ended. Shelby's daughter has gone into premature labor. After he arrives in southern Michigan he learns that his ex wife in heavily in debt to a loan shark and doesn't have the money to repay her loans. In an attempt to get his money the shark kidnaps Shelby's pregnant daughter. It's Shelby and his retired law enforcement friend Mack to the rescue.
This book could be five stars across the board but looses one for length and that it is sold at an inflated price for such a short book.
Theo Holland does a great job narrating.
HIGHLY RECOMMENDED.
If you found this review helpful please indicate so.
Thank You.

This third installment of the Shelby Alexander series keeps the action and excitement going from the first page to the last. Shelby’s girlfriend, Carly, was absent from this story (although she deserved a break after what Mr. Hart put her through in the last book) but the other major characters were back in top form doing what they do best. In this story Shelby’s family becomes the center of attention when his ex-wife and pregnant daughter become entangled with a ruthless loan shark as a result of the ex-wife’s gambling habit. The tension builds relentlessly as the sadistic loan shark poses an ever-greater threat to the well-being of Shelby’s family. I was pleased to see Shelby’s friend, Mack, get a larger role in this book (much like in the first book) as the insulting banter exchanged between these guys, no matter the situation in which they find themselves, is always amusing.

This series is more of an ongoing series of adventures in the life of the main character, so the books are best enjoyed if read in order starting from the first book. In each, the main conflict is resolved but you can tell there will be more coming for the characters as there are a number of threads weaving the stories together. I have been enjoying reading along with the audio versions of the stories and must comment on the great job done by the narrator, Theo Holland, who imbues each character with distinct voices and inflections making it easy to keep the characters straight even if you close your eyes and just listen. This is a great series that can easily become addictive whether you prefer to read it or listen to it (or both).

While I did purchase a copy of this book, the author gifted me with a code for the audio version and the above is my honest and unbiased review.

If you find this review helpful, thank you for so indicating.

This is the third book. It keeps getting better. This book Shelby goes to be with his daughter that is having a baby . His x wife is there and they have a history like any x there is a lot of regrets and looking back. She is in trouble with some loan sharks and Shelby helps get her out of trouble. This book is worth buying in my opinion. Theo Holland makes it even better. He is definitely in my top list of narriaters. If my review was any help will you please click the helpful link. Thank you

Of Babies and Gangsters

When Shelby's ex-wife borrows money from the wrong people and the collectors involve his pregnant daughter in their collection activities, Shelby and Mack swing into action in the way only they can.
There's lots of gunfire, violence and edge of your seat action in this third installment in the Shelby Alexander series. Fans of the Serenity stories will love this family related softer side of Shelby, but even though the stories are a series and do run concurrently, they can stand well independently if you're not looking to make series long commitments.
A great "don't mess with my family" story..

Nice addition to the series

Also available via KU & whispersync discount. Also, the first 4 books have now been combined into a single box set.

This is the third book in the Shelby Alexander series. Shelby's ex-wife owes money to a mobster who is now hunting her down and endangering his daughter as well. Multiple POV's and we hear a lot from Jimmy relative to Shelby. I guess because of the length, we're kind of just ignoring the people of Serenity which felt a little off. Plus, I've enjoyed Carly as a character and her interactions with Shelby, but she's completely ignored in this one. I didn't like it as much as Serenity Stalked, but it was still an action packed listen.

Theo Holland continues to be an excellent choice for this series. He gives all the characters unique voices.

I received a free copy of this audiobook and am voluntarily leaving a review.

Shelby finds his ex wife has gotten mixed into trouble. Then with his daughter Leslie ready to deliver the grandchild. He is good at fixing, he would rather be with his daughter. Adventure and laughs await
Given ARC audio also for my voluntary review and my honest opinion Narration by Theo Holland is superb.

Man on a mission

Shelby is at it again!!! And his buddy Mac is back!!! These books just keep getting better and better!! I love this series. I agree they are too short but that's just because I don't want them to end. I love how the author can pack so much into such a short time. It gets started right away and keeps moving the entire book. I never get bored and there is never a dull moment. So, it's ok with me they aren't full length books. I love them either way and will keep listening to this book series as long as the author and narrator keep working together as they make the perfect wonder duo!!! So many great characters! I'm definitely on the edge of my seat waiting for book 4.

Don't mess with a man's family.

This is the third in the Shelby Alexander series. I have listened to and enjoyed them all.

The author and narrator make a good pairing.

Shelby is back! This time, he’s on a mission to save his ex-wife with the help of his friend Mack. Mr. Hart’s writing is as tight and right-to-the point (as always), which makes this yet another fantastic read. If you haven’t jumped into this series yet, you’re missing out!

The serious "cliff hanger" challenge of earlier books in the series has abated, leaving another complete (if a bit short) novel. I love this format -- concise stories, each on its own -- its a bit like a television series. I do recommend reading or listening to the earlier books.

This entry in the series, in particular, focuses on the core group of characters and their relationships (there's plenty of action too, don't worry!). Although this does mostly stand on its own, the depth in the characters (and in this book, the plot) is much greater when listening to the whole series.

Again, the narrator is well-sited to the book, but a bit slow, so I listened at 1.25 speed.