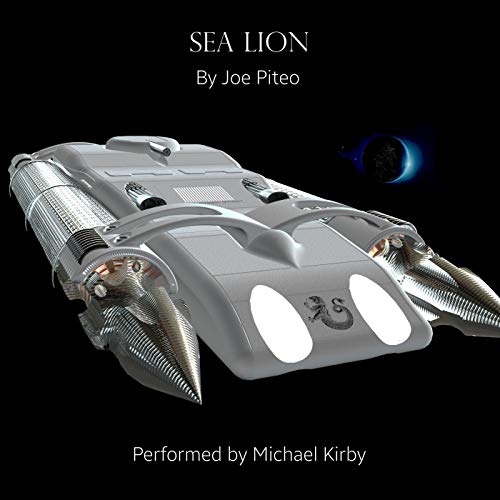 By: Joe Piteo
Narrated by: Michael Kirby
Try for $0.00

Sea Lion is the third book in the sweeping Ocean of Storms series. The book continues to follow the lives and adventures of Jack Ashton, commander in the Navy of the Republic of Texas; Steven Montrosa, physician and scientist; and, Maria Domingo, Jack’s second-in-command and a brilliant warrior in her own right, and a romantic figure in Montrosa’s past.

Sea Lion chronicles the voyages and exploits of Ashton’s ship, the RTS Sofia. Badly damaged at the bloody Battle of the Eudoxus Crater, the Sofia has been restored and upgraded at the shipyards of Port Plato. The Sofia is sent on a very special mission to the perilous territories of the Moon’s southern pole. The Earth continues to be devastated by a viral pandemic, and the Moon has become a sanctuary for millions of refugees. The great Davos Plague is only one enemy, however. Within the interminable battle between Western and Islamic culture, the ominous threats of Islamist and progressive terrorism remain.

The RTS Sofia is the recipient of the Navy’s newest class of ship, the Fast Patrol Boat. Designed and built by Lamborghini at Bliss Crater, the new FPB Sea Lion rolls down the ways and into the Ocean of Storms. The Sea Lion and the Sofia head south from the terraformed cities of Port Plato on a very secret mission. The enemy is plotting a catastrophic attack that threatens the future of the entire lunar sanctuary.

As the book opens, Jack is on trial for actions at the Battle of Eudoxus, Maria Domingo is hospitalized with her recent wounds, and Stephen Montrosa is frantically struggling to help both his friends. Admiral Ostrander and the Office of Intelligence Service are planning a response to the developing terrorist attack.

Sea Lion introduces us to Ostrander’s tactical experiments, the intelligence machinations of the OIS, the Turkish captain and crew of the bulk carrier Hippopotamus, the perilous black canyons of the South Pole, and the fascinating culture and personalities of the once nomadic Bedouin tribe of the Howeitat.

What listeners say about Sea Lion