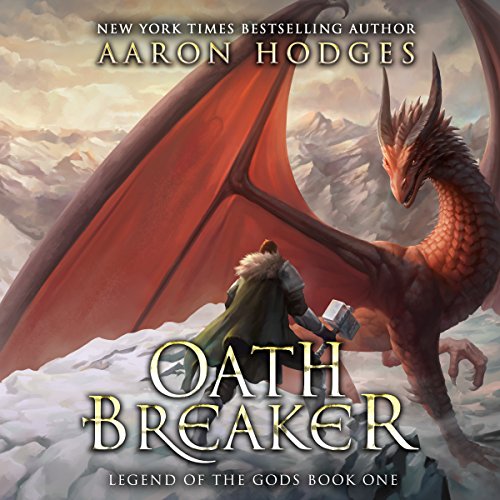 By: Aaron Hodges
Narrated by: David Stifel
Try for $0.00

A century since the departure of the Gods, the Three Nations are now united beneath the Tsar. Magic has been outlawed, its power too dangerous to remain unchecked. All Magickers must surrender themselves to the crown or face imprisonment and death.

Alana's mundane life has just been torn apart by the emergence of her brother's magic. Now they must leave behind everything they've ever known and flee - before the Tsar's Stalkers pick up their trail. Tasked with hunting down renegade Magickers, the merciless hunters will stop at nothing to bring them before the Tsar's judgment.

As the noose closes around Alana and her brother, disgraced hero Devon finds himself at odds with the law when he picks a fight with the wrong man. The former warrior has set aside his weapons, but now, caught between the renegades and the Stalkers, he is forced to pick a side - the empire, or the innocent.

What listeners say about Oathbreaker

The prologue of Aaron Hodges Oathbreaker really drew me in, and made me suspect I would enjoy the rest of the book - and I was correct. The narration quickly drew me in and I found myself caring about what happened to the main characters. As the story developed, my empathy for Devon grew as his character unfolded through the story, and Alana's character arc was intriguing. Hodge was meticulous in how he conveyed the latter, allowing him to setup a bit of a surprising reveal at the conclusion (I'll admit, I kind of saw something coming, though not exactly what was revealed).

I appreciate that even while Hodges was creating a larger-than-life warrior in Devon, the character is not unrealistic. Amazing and insanely powerful warrior, yes - invincible, unstoppable war machine? Nope. The characters make good decisions and bad decisions and the consequences of those decisions feel very realistic (and sometimes rough). I found the story very engaging and am eager to learn what comes in the next volume.

As for the narration, David Stifel did a great job. I really felt like I was sitting down with my grandfather or an uncle (okay, a "older male" person) and listening to them tell the story. His was just an easy voice to listen to. Though the individual character's voices were not hugely different, Stifel personified each character clearly, giving each his or her own nuances that set them apart. His voice was easy to listen to and I wouldn't hesitate to listen to more stories narrated by him.

As this was the first in a series, I think it is good to note that there was a solid amount of closure at the end of this book. I won't quite say it ended on a cliffhanger—there are some big conflicts left unresolved—but there is definite sense of resolution, at least to some degree. For those who care, the writing was largely clean of cursing and the romantic elements were kept to a minimum, and nothing explicit was detailed (nor did anything along that lines really happen...). I'm not sure if Hodges was aiming this at a YA or even pre-teen audience, but I would consider the subject matter appropriate for such an age group. That's not to say the story is simple or the violence is mild (it would probably get a PG-13 rating as a movie) - as an adult I enjoyed it, and I'm sure most adults who enjoy fantasy would like it as well.

[Note: I did receive a free copy of this book in exchange for an honest review]

Funtasy with a dark edge

I received a free copy of the audiobook with the option of leaving an honest review. So here it is.

A mere hundred years after the events of the Sword of Light Trilogy, and the Three Nations are finally at peace under a new ruler known as Tsar. But things are not as they seem. Wielders of magic are hunted down by the Tsar's army of Stalkers. Alana and her brother Braden are such wielders, and are forced to run but the Stalkers are never far behind. When they meet Devon, a former hero now deemed a coward, they get some unexpected help. However, with the Stalkers not far behind, can they make it to the Northlands and freedom from the Tsar's edicts?

This is a fun story, a worthy follow up to the Sword of Light. The characters are likeable, with some hidden depth. Who is the Tsar? Is he the leader the people believe him to be? Why does he detest magic, and where the hell did he get dragons from? Why does the leader of the Stalkers, Quinn, know so much about Alana? And can Devon overcome his guilt to fight the good fight?

Not all is revealed in the first in the new trilogy, but it definitely develops an interest in reading/listening more into the series. The narrator, who I believe without bothering to check, is the same guy who did the Sword of Light, and he does a masterful job.

If you liked the Sword of Light, or you like fantasy with characters with a good back story, then Oathbreaker is definitely worth your time.

This was a good fantasy story with a cool magic system. I founf myself wanting both of thw main characters to get everything they wanted and m9ght have cheered a little at a few points.

I really liked this book!Magic is not allowed.While running from the authorities two young siblings one a magicker,first insult then blackmail a large man and his moneykeeper to get on a boat away from the city.The man decides the kids are ok and our adventure is ready to take another turn.David Stifel was a fine narrator for this book.I was given this book by the narrator,author or publisher free for an honest review.

Aaron Hodges does it again! I am a big fan and he does not disappoint! Oath Breaker is a very captivating novel. It picks up about a hundred years after the Sword of Light Trilogy but stands very well on its own. Well written, well developed, and great depth for both the characters and the world building. A few of the twists really caught me off guard and kept me wanting more. David Stifel once again delivers a great performance that keeps the listener engaged. He is the perfect narrator for Aarons work.

Although this book was given to me for free at my request and I provided this voluntary review, I am anxiously awaiting the next books in the series.

I loved it more then I thought I would.

With books that have dragons, I found they are hit and miss in whether they are intriguing enough to hook me and keep me reading to the end. I was pleasantly surprised with this one. The author is a good writer, he gave us enough information about the characters to form a connection and he knows how to inpart this information without boring us to death. I also found it a fast paced book which is my type of thing and it ends on a cliffhanger. I am dying to find out what happens next.
I would highly recommend it to everyone. There is no profanity or sexual content but there is some violence but it is not graphic.

This was a fantastic book. I haven't read/listened to the Sword of Light series that this book is spun off from, but I didn't feel like that was a problem. I was sucked right into the story and enjoyed the listen. I think that is due to this series starting a century after the first series ends. If anything, this book made me want to go back and listen to them. The narration was great and did a good job of holding my interest. In fact, I'm now interested in checking out his other works.

I was hooked from the first chapter! So, so good!

I had such an enjoyable and pleasurable experience listening to this book. What a fantastic story!

This book had a really slow start, with a bit more telling on the background of the world instead of showing. After a few hours in, this book really picked up. The narrator for the audio book reminded me of the narrator for Game of Thrones, though he was a bit too slow. When I changed the speed from Normal to Fast, it was much better, but even then a touch too slow.

I liked the characters, and the trials they faced along the way. It's your standard quest fantasy with a touch of underlying romance and separation of characters. The end was satisfying, though with a touch of a cliffhanger, still it felt complete enough to not bother me. I look forward to checking out the rest of the series.

Going to be a great series

As with all new series it took a few chapters to get familiar with the characters and new world. As the story developed it had my full attention. I liked how the characters interacted with each other, and a surprise ending that you will want to follow.
I was not sure at first about the narrator, but wow, he made the people come to life. The voices he created were right on. Looking forward to the next release.

This is my opinion only & should be considered with others as a whole.This audio was given to me free at my request & I made this review voluntarily. Thank you for the opportunity.

Oathbreaker (Legend of the Gods Trilogy Book 1) was my introduction to books written by Aaron Hodges and I found it enthralling from the start. The summary of the story drew me to it in the first place and it didn’t disappoint. Action, suspense, treachery, wry humour from some of the characters, magic, dragons, a small amount of romance; this book has all the elements I enjoy. Aaron Hodges has produced a great plot with some unexpected twists and turns, well drawn characters and highly descriptive imagery. A thoroughly enjoyable tale that I didn’t want to end. A good set-up for the second instalment of this trilogy (Shield of Winter).

Combined with Aaron Hodges superb writing, David Stifel’s first-rate narration really brings the book to life. I usually prefer Scottish and Irish accents for this genre of book, but David Stifel’s voice is pleasant to listen to and his repertoire of voices for the different characters does enable the listener to distinguish them from each other where dialogue takes place. One big advantage with Audible is that you can alter the speed of narration (ie: faster or slower) to suit your own particular preference. I found that upping the speed to 1.25 worked best for me, but others are likely to prefer the original speed or somewhere in-between. Irrespective, it is a great listen and leaves you wanting more.