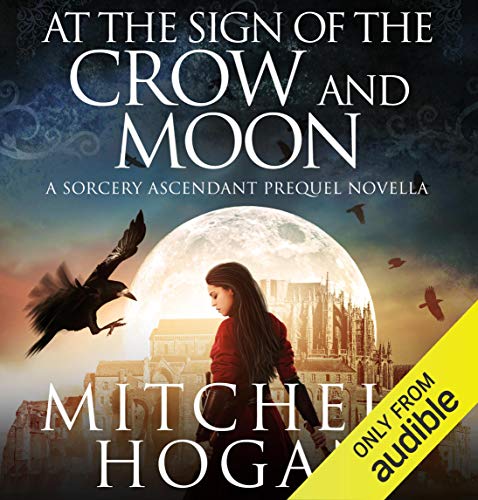 By: Mitchell Hogan
Narrated by: Oliver Wyman
Try for $0.00

A fast-paced fantasy prequel in the world of the Sorcery Ascendant Sequence, whose gripping conclusion, A Shattered Empire, released September 13th, 2016.

Ten years before A Crucible of Souls...

In the bustling capital city of the Mahruse Empire, Felicienne Shyrise spends her days as a talented investigator, taking on stolen goods and missing person cases and the occasional murder the city guard are too incompetent - or too lazy - to resolve.

During the nights she hones her skills playing Dominion, a board game almost as complicated as life itself. She dreams of making a name for herself and becoming the richest woman in the Empire.

But when she's roped into a murky investigation by a First Adjudicator to the immortal Emperor himself, her life is thrown into disarray. Will this be the perfect opportunity to showcase her skills and make valuable connections, or will her future now be in the hands of political powers that can never be denied?

Working against her will, and afraid of the consequences of refusing the commission, she uncovers evidence that points to an attempt on the Emperor's life. Felicienne rapidly finds herself a target and must use her considerable wits to uncover the plot of an unseen enemy who always seems to be one step ahead of the game.

This is a good prequel to an enjoyable series.

Oliver Wyman's performance is as amazing as usual! Wyman always elevates every book he performs with his limitless talent.

A little too obvious

While I liked the world in which the story took place, I could not help but find the plot a little slow and its development to be a little to obvious. The main revelation in the story was not a surprise and the mystery was not much of a mystery since it was clear who was the antagonist since about the middle of the book.
I'm still going to give the rest of the series a try, but overall I must admit to being a little disappointed with this one.

In the main trilogy of the Sorcery Ascendant Sequence, Lady Felicienne is one of the "point of view" characters that plays a key role in determining the outcome of the story. This prequel novella gives you some insight into how she acquired her role in service to the Emperor. Lady Felicienne started as a private investigator in the capital city of the Mahruse Empire and her knack for the game Dominion starts to get her noticed. Dominion is a board game that is played across the empire using a board with 3 tiered levels and a wide variety of pieces, making it very complex and strategic. The annual tournament in the capital is so popular that the Emperor himself meets the winner and this event is the backdrop for this novella.

It is an interesting tale that gives you a glimpse into the bigger world and the events take place 10 years prior to the first book in the series, A Crucible of Souls. Lady Felicienne uses her skill in Dominion to win enough money to fund her lifestyle as a investigator, which sometimes doesn't provide steady income, and these two worlds will overlap as her most recent case turns out to be far more dangerous than she initially anticipated. Dangerous not only because of the criminals that she is investigating but also because this case has put her in the sights of the Emperor's secret intelligence agency. Caught between a rock and a hard place, Lady Felicienne will need to decide which side is worse and find a way to come out alive as these two opposing forces have her trapped in the middle.

I listened to this novella prior to the series itself and for me it was ok but not great. I think it is better experienced after the main series and already knowing Lady Felicienne, which would make this insight into her origin a little bit more special, and that is what I would recommend. This is narrated by Oliver Wyman, who narrates the main trilogy as well, and he does an excellent job on all of it.

The narrator did a great job. The world building was great and now I have a dozen questions. The story was amazing and gave me so much more than I expected from a prequel.
I definitely recommend this book. And now I'm off to listen to book 1...!

it was a good introduction to the series, I liked that it was entertaining and deep in some manners, it was pretty cool actually.

the story was pretty well done, a little politic warfare here, death, intrigue and interesting heroes and heroines all well packed in a fantasy action based world.

Would you listen to At the Sign of the Crow and Moon again? Why?

What was one of the most memorable moments of At the Sign of the Crow and Moon?

Which character – as performed by Oliver Wyman – was your favorite?

This series has everything including a great story, especially great narration, and great characters. I wish they were all available through audible plus but most do you have to pay for.

I Could Not Enter

The story sounded interesting but I could not enter this world in my mind. There were many current clichés in the dialog which is something that blocks me from staying connected with the story. I listened to the additional chapter of the Sorcery Ascendant series at the end. I will not continue with this series.

Great Insight into A Side Character's Background

Lady Felicienne is one of my favorite character from the series, so it was great to hear more about her. I just finished the series and I'm glad I listened to this one too. It's a great story even on it's own.

A great little story, works as a standalone

Considering this is a prequel to a series, it genuinely can be read as a standalone (I've never read the Sorcery Ascendant series, though I plan to soon). The cast of characters were fantastic, and I'm looking forward to possibly revisiting them in the rest of the series. The world was well developed considering the length of the story, and makes me curious to see how it's built upon in the rest of the series.

The narration let me down a little as with most of the characters being female, and the narrator being male, they all seemed to wind up sounding the same which made some conversations difficult to follow.

At the time of writing this is free so I was certainly never going to have any complaints about it. It is actually an interesting piece of character background for one of the main characters in the series and for that reason alone is interesting. Consistency with the main storyline is reasonable though somehow at this time she is considerably more talented at Dominion to suit the plot.

In itself it's also a decent short story with the same narrator so if you are enjoying the Sorcery Ascendant series and would like a little more of Felicienne then this should do the trick.

It's a real bonus of the modern reading platforms that it is now so much easier for writers to publish such "extras" so bravo to Mitchell Hogan and of course Audible for making this one happen.

Interesting but not unique

This was an interesting and at times compelling story, but made me think of other stories I've already read. The reader did a fine job, so it was a pleasure to listen to, but I had hoped for something a bit more original. Still, I enjoyed it; I'm just not sure that I'll listen to the next one.

A cracking fast paced fantasy adventure in the world of the Sorcery Ascendant Sequence series, set ten years before the first book, we follow Felicienne Shyrise, a young talented investigator, trying to build a lucrative business for her self, when an investigation uncovers the gang behind the canal murders and are apprehended, But when she’s roped into a murky investigation by a First Adjudicator to the immortal Emperor himself, her life is thrown into disarray, will this be the perfect opportunity to showcase her skills and make valuable connections, or will her future now be in the hands of political powers that can never be denied, a pro at the game Dominion (fantasy chess) a tournament she must enter and win to stop an assassination attempt of the Emperor, a fantastic read of loyalty, guilt and remorse, lots of action, great characters and the plot is intensely good, highly recommend....😁

This was a very well done prequel for the Sorcery Ascendant series, with the same magnificent narrator.
It follows the Lady Felicienè, several years before the start of the S.A books. She is very different from when we first meet her then.
Being a mystery story, I can't really go into the plot.
This wasn't a magic themed story, but rather one focused on intrigue.
It really kept my interest, while keeping my guessing until the end.
If you enjoyed the Sorcery Ascendant books, you will enjoy these.
it is not required that you have done so, though. So newcomers will not be lost.