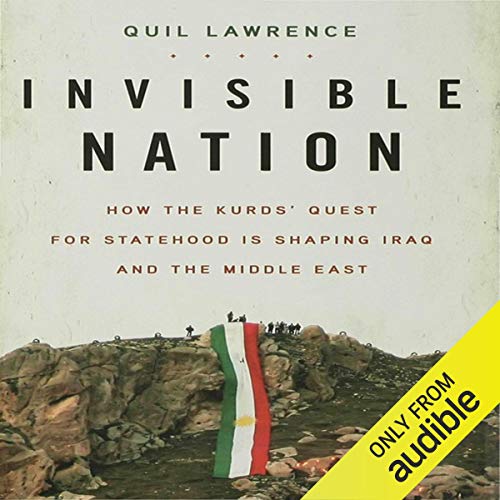 By: Quil Lawrence
Narrated by: Mark Moseley
Try for $0.00

The American invasion of Iraq has been a success - for the Kurds. Kurdistan is an invisible nation, and the Kurds the largest ethnic group on Earth without a homeland, comprising some 25 million moderate Sunni Muslims living in the area around the borders of Turkey, Iran, Iraq, and Syria. Through a history dating back to biblical times, they have endured persecution and betrayal, surviving only through stubborn compromise with greater powers. They have always desired their own state, and now, accidentally, the United States may have helped them take a huge step toward that goal.

As Quil Lawrence relates in his fascinating and timely study of the Iraqi Kurds, while their ambition and determination grow apace, their future will be largely dependent on whether America values a budding democracy in the region, or decides to yet again sacrifice the Kurds in the name of political expediency. Either way, the Kurdish north may well prove to be the defining battleground in Iraq, as the country struggles to hold itself together. At this extraordinary moment in the saga of Kurdistan, informed by his deep knowledge of the people and region, Lawrence's intimate and unflinching portrait of the Kurds and their heretofore quixotic quest offers a vital and original lens through which to contemplate the future of Iraq and the surrounding Middle East.

What listeners say about Invisible Nation

This was all very fascinating and illuminating. It was a lot of stuff that I felt like I should already know but didn't. It sheds a lot of light on current events in the region, particularly in Iraq, of course, but also Turkey.

The Current Situation in Kurdish Iraq

Where does Invisible Nation rank among all the audiobooks you’ve listened to so far?

Mainly in the middle

What does Mark Moseley bring to the story that you wouldn’t experience if you just read the book?

Factual, precise, tells it as a well written documentary

I had hoped it would go into some of the history of the Kurdish people; instead it focused upon the time of Saddam to the present, very well explaining the errors, interplays, power plays that have given us the Iraqi North today

A lot of names and places

If you are not previously familiar with the geography and the name of the some key people referred on the book, you might get a bit confused.
It is also sad that the book was published in 2008, which leave a huge gap with the until 2019, but still is a good book.

I would recommend it.

Great modern history / memoir about the creation of Iraqi-Kurdistan. If you're interested in how a semi-autonomous ethnic region in the Middle East is formed, this is the perfect book. My favourite thing about the book was that it focuses on the Iraq-Kurdish political viewpoint without shying away from the stuff the English speaking audience wouldn't want to hear. Like the brutality the Kurds sometimes inflicted on their former oppressors or sometimes just the Arabs in general. The writing feels honest. I finished the book with a desire to learn more about Iraqi - Kurdistan and now Rojave, and more about the Kurds in general.

As an Iraqi Arab, I really enjoyed this book. It offers a unique perspective on the events from the Kurds perspective. I was surprised how accurately it described events although it covers around 100 years of modern Iraq history. kudos to the writer for putting this monumental effort in writing this book. I also enjoyed the narration that brought events to life and made it sound more like a radio documentary than an audio book, especially the vocal impressions of Bush Junior, very entertaining.