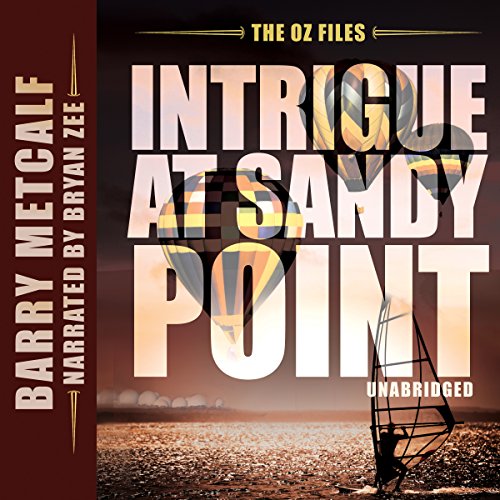 By: Barry Metcalf
Narrated by: Bryan Zee
Try for $0.00

When a CIA agent is murdered at the idyllic seaside resort of Sandy Point, Martin and Claire are dispatched to investigate. They uncover a plot with international implications and go from one end of the country to the other to stop those responsible. Fast cars, planes, and helicopters aid them in their race against time to avert this threat to world peace.

Before Martin and Claire's investigation can gather headway, they discover there is more going on in this laid-back beach community than meets the eye, and they are threatened with death and worse than death by men who will stop at nothing to achieve their goals.

Eventually, the duo uncovers a devious plot that compels them to travel from one end of the country to the other in an attempt to stop those responsible. Fast cars, planes, and hot air balloons are utilized in their race against time to avert disaster.

Just when they think they have the situation in hand, a new menace emerges - one that will have ramifications beyond Australia's shores. The problem is, they have no idea where or when this new threat to world peace will be carried out.

As if this wasn't enough to contend with, an old enemy reappears. Although she is in a weakened state, she is hell-bent on exacting revenge - as soon as her powers are fully restored. Will Martin and Claire overcome this new danger before their lives can be terminated once and for all?

What listeners say about Intrigue at Sandy Point

I highly enjoyed the narrators performance and I found the story line both timely and slightly plausible. My biggest negative would be that the ending felt a bit rushed and truncated or as if the author had been told to finish the book in a specific thrill.

A chilling look at the Intrigue at Sandy Point and ways it operates. I'm sure Ignatius as a reporter for the Washington Post knows about such things. I'm glad his book turned out well with the Bad Guy getting what he deserved and the Good Guy triumphing. Unfortunately, this most likely doesn't often happen in real life, sad to say.

Gripping Crime Thriller with a Twist

Really enjoying this series of books love the way the murders are interwoven with the occult, Claire and Martin derail Wanda at most turns brilliant