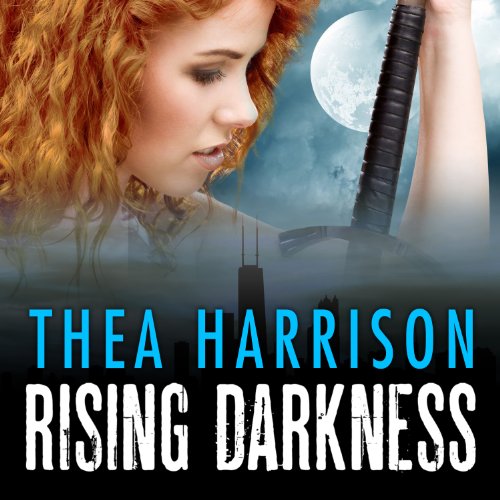 By: Thea Harrison
Narrated by: Sophie Eastlake
Try for $0.00

In the hospital ER where she works, Mary is used to chaos. But lately, every aspect of her life seems adrift. She's feeling disconnected from herself. Voices appear in her head. And the vivid, disturbing dreams she's had all her life are becoming more intense. Then she meets Michael. He's handsome, enigmatic, and knows more than he can say. In his company, she slowly remembers the truth about herself.

Thousands of years ago, there were eight of them. The one called the Deceiver came to destroy the world, and the other seven followed to stop him. Reincarnated over and over, they carry on - and Mary finds herself drawn into the battle once again. And the more she learns, the more she realizes that Michael will go to any lengths to destroy the Deceiver.

Then she remembers who killed her during her last life, nine hundred years ago...Michael.

What listeners say about Rising Darkness

Firstly, nothing like Elder Races - this is a cleverly written but dark alien story about 7 cosmic beings coming to Earth after one of their evil criminals named The Deceiver, escaped and it is their jobs to catch him. They each had to take a potion to allow their bodies to go through Earth's atmosphere but unfortunately, there was a terrible side effect - once they landed and were reincarnated into a family/culture none of them remembered each other or their mission. However, they are each constantly bombarded with thoughts and memories of past lives spanning thousands of years which tortures their minds and souls and sometimes they meet but it was always too late - until now.

This is the story of Mary and Michael who were soul-mates on their planet and have found each other again but The Deceiver, who sucks souls and possesses bodies together with all his soulless minions, his magic and all his memories from thousands of years on Earth still intact (he didn't take the potion), is hot on world domination and is therefore on their trail with disastrous consequences.

It was hard going to begin with as there was a lot of well written but 'wordy' character and world building to be done and, to be honest, it kinda lost me in parts and I ended up not caring much. However by part 2 things got more straightforward and once they found each other the pair had to rebuild trust, run, fight and there were a few emotional scenes along with a few sexual encounters but these were mildly described.

Worth a credit? This is a hard one because I am sure there will be plenty of you out there loving the sound of this and will thoroughly enjoy it - but unfortunately, for me, I probably won't follow the series as I found it centred too much on the evil deeds, depressing, dark side of PNR.

yeah not about aliens..

Would you listen to Rising Darkness again? Why?

im not super religious nor have i even read the bible but this story is not about aliens. its about 8 beings (archangels?? there were 8) one who fell...they call him the Day Star?? thats what Lucifer means - day star/morning star etc. im pretty sure thea is loosley basing this on an angels vs demons theme. there really isnt any religious referrences in this book besides a couple hints here and there - though im sure the archangels werent dating each other... anyway its good, if you like thea you will like this book. hugh elder races fan and this didnt disappoint.

Have you listened to any of Sophie Eastlake’s other performances before? How does this one compare?

Not What I was Expecting

This is a bit of a let down after Thea Harrison's Elder Race series. While she does a good job of writing this book, it is what I would call a ground work book for what I hope will come. Unfortunately that is what most of this book is, ground work, but there is some good action at the end and some very interesting questions posed at the end. It will be interesting to see if what I think and hope happens to Nick. Now that the ground work has been done, I look forward to the next book in this series as well as the next in her Elder Race series.

As always Sophie Eastlake does a great job of narrating.

Enjoyable start to the series. Took a little while to get started but exciting story line. Honestly I didn't like May until the last 1/3 of the book.

A darker story, but still intriguing

I was very glad to start reading this book, and I have to say I was not disappointed. I think this new series will be darker than the Elder Races books, but I still really enjoyed the first book of this series. I am glad it's not the same old thing where the author thought if it worked for the first series, why not just change place and character names and start a similar series. I will definitely be getting the next book.

When I bought this story I was expecting to get another Elder addition. Yet, it was so good to read another one of her creations very similar to her Elder Romances Paranormal.

I think I was somewhere in the 20th Orso chapter before this book quit being confusing. I lost interest very quickly in this book but since I have paid for it I wanted to do my best to finish it I skipped a lot of it. save your money by something better this lady is awesome writer with a big imagination. a lot of her books are too short this one was long enough and you got your money's worth that way but maybe if it held my attention enough for me to unravel it it would have been a good book

The story dragged on and on. Both characters did not grab me.

Would you ever listen to anything by Thea Harrison again?

I will. I enjoyed her other books.

No issue with the narrator.

I love her books and she's one of my favourite authors. This one was a miss for me.

not til about 3/4 through that I felt character development took off so that I cared about the protagonists and story. A new series, but I felt that much of the early parts of the book could’ve either been more interesting, more engaging, or left out altogether. Nothing made me care about each character’s fore story in the absence of any plot reason given to motivate or integrate the plot. When it finally fell together, it was up to the author’s usual caliber.

I enjoy Thea immensely. Can't wait to see what Mary and Michael accomplish. I hope Nicholas will be back.