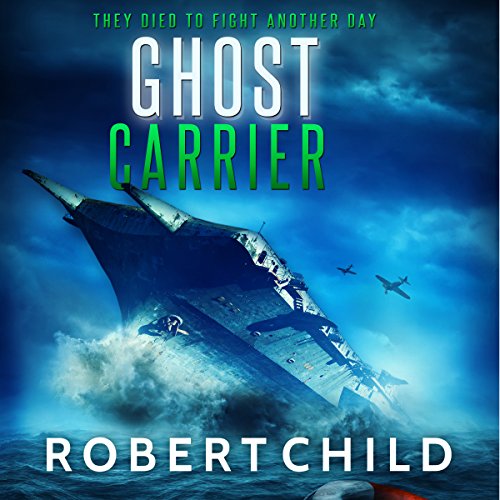 By: Robert Child
Narrated by: Kirk Winkler
Try for $0.00

Frank Rusk has not been sleeping well lately. He is approaching his milestone 70th birthday. Each night for the past two weeks, indescribable scenes of horror have awakened him. He is on an exploding ship in WWII, which is sinking fast. Men are burning alive all around him. He hears sailors cry out that a Japanese torpedo hit the bomb bay!

In these nightmarish visions, Frank realizes he is not a spectator watching but a sailor living them. Everywhere he turns, he sees buddies he knows taking their last breaths.

Frank decides this horrifying scene must be what his father, Joe Rusk, experienced in his last moments alive before perishing on an aircraft carrier in November 1943. The sinking occurred just two months after Frank was born.

At his 70th birthday party, before blowing the candles out on his cake, Frank makes a wish he has kept secret his entire life; an impossible wish that defies time and the laws of the universe. Frank yearns to rewrite history and have his dad in his life. As Frank blows out the candles, his father Joe's face materializes in the flames. Joe Rusk looks terrified and screams to Frank for help.

Unbeknownst to Frank, his father did not die in 1943 but entered a parallel dimension when his ship sank. Joe Rusk and the crew of the carrier are trapped in time on a parallel Earth fighting a far superior Japanese naval force, and America is losing the war.

Outnumbered and outgunned, the crew's only hope is the unbroken soul connection Joe and Frank share. But will the father-and-son bond be strong enough to bring the doomed crew home?

What listeners say about Ghost Carrier