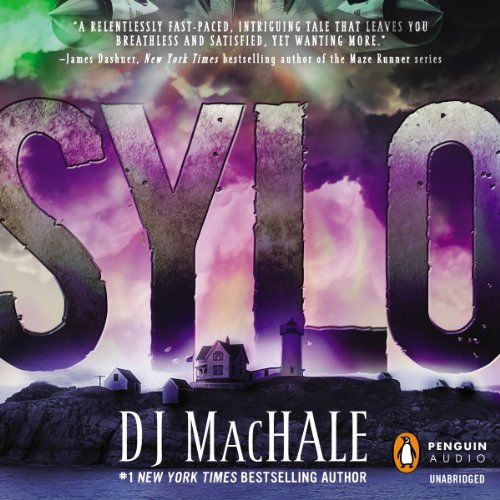 They came from the sky parachuting out of military helicopters to invade Tucker Pierce's idyllic hometown on Pemberwick Island, Maine.

They call themselves SYLO and they are a secret branch of the U.S. Navy. SYLO's commander, Captain Granger, informs Pemberwick residents that the island has been hit by a lethal virus and must be quarantined. Now Pemberwick is cut off from the outside world.

Tucker believes there’s more to SYLO’s story. He was on the sidelines when the high school running back dropped dead with no warning. He saw the bizarre midnight explosion over the ocean, and the mysterious singing aircraft that travel like shadows through the night sky. He tasted the Ruby - and experienced the powers it gave him - for himself.

What all this means, SYLO isn’t saying. Only Tucker holds the clues that can solve this deadly mystery.

Look to the sky because Pemberwick is only the first stop.

"If you're a fan of The Maze Runner and Alex Rider, you might want to pick up SYLO.... A fast-paced read and a huge cliff-hanger." (EW.com)

"[An] extremely high-octane story that's the equivalent to a summer movie blockbuster." (Booklist)

What listeners say about SYLO

Loved the journey but not the destination

SYLO is a complicated, high-concept jigsaw puzzle. Book one dumps all of the pieces out on the floor in a jumbled pile you have no idea where to start.

Now, this is kind of the norm only instead of having your edges done by the middle of the book and the complete picture by the end, SYLO just continues to dump pieces onto the pile.

By the end of the book I maybe, MAYBE had the corner pieces. In honesty I still have no real idea of what the heck is going on and neither do our heroes.

I’d normally hate a book with so little resolution/explanation but there was just something about the well-written and smartly paced story that still made it rewarding. The characters were great – not outlandish or standout just real and genuine enough to make their bravery and daring deeds under extreme circumstance even more impressive.

It also helped that I’m a sucker for stories that use setting as character and fictionalised Martha’s Vineyard was a rich background to juxtapose an outlandish story.

DJ MacHales excessive forward grated on me but the guy clearly has skills and totally won me over.

So while I didn’t like where the story ended, I loved the bulk of it enough to give it a qualified recommended.

It was a seriously high-concept story that remained totally grounded so it’s great for young and old readers not into hard science fiction or fantasy (like me).

However, I can see the lack of resolution and clarity by the end being a real problem for some readers. If you’re concerned maybe wait until book 2 is released. I’d be a lot happier if I could go straight into the next volume!

I must begin on the negative and address my major two criticisms of the book because, I came down hard from my first chapter high. First, it was a bit of overkill on the aspects of the island. The theme of this book’s Forward, McHales's love of travel, seeped into the story a little too much form. The idilicism of the island was explored more than the plot was, which annoyed me because the central plot was really interesting.


Secondly, it's Tucker. He just doesn't seem like a strong enough lead. I didn't mind him being an antihero in the beginning, but as the story goes on he's so disillusioned with life. For a fourteen year old, it's pretty sad. Also, a coward in a distracting way. I'm assuming he's going to do some kind of 180, but I don't know. When the big decision the trio had to make a about whether or not to leave the island, he didn't want to go. Tucker's reasoning -- a defiant stance about not wanting to leave life on the island despite his world going to hell and his need to put 100% faith in his parents though he just learned they're working with the enemy -- was just odd. I guess it goes back to Quinn's criticism of him not wanting to take risks, though he did run race toward armed Sylo soldiers when they chased down the two guys they murdered. I don't know, I guess he was just a little inconsistent for me. However, I do have to say agree with Tucker's philosophy about working hard. Hard work in school and a degree doesn't really equal anything anymore.

Everything that I just said, this relates to the first half of the book. Which was a slow burn to the action. Because the second half explodes like a powder keg. The plot goes from having sinister undertones to all out warfare. I have to admit, while it was an abrupt shift it was a needed one. As soon as Tucker is face with major conflict and has no choice but to step up too the plate after loosing Quinn and his parents support, he does. He was faced with adversity and fought through it. I can appreciate it. Brave Tuck showed up, and things really got good. Classic MacHale action!

One of my favorite series!

This is definitely one of my favorite series! I'm listening to it again because I loved it so much the first time. Very interested story line and enthralling plot twists

Keeps you going, but look out for the cliffhanger

The overall mystery was great but the ending features more questions than answers, and with a 'to be continued...'

absolutely exciting! Narrator was great and DJ MacHale has a way with creating great character s!

I have a listen to this book 53 Times and I know every single word of it I recommended to a lot of people it's really good book props to DJ Machale.

If you could sum up SYLO in three words, what would they be?

What other book might you compare SYLO to and why?

Books by Clive Cussler are similar in they are also action packed with twists that keep you guessing who is with who.

Which character – as performed by Andrew Bates – was your favorite?

I found the ending was unexpected. My guess on what was happening was for something else.

I just got the next book in the series and looking forward to see what will happen next.