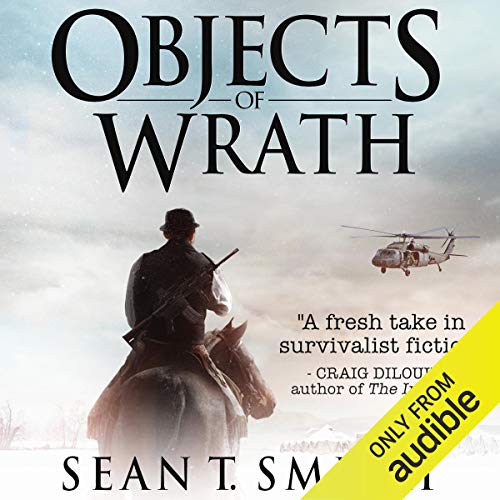 By: Sean T. Smith
Narrated by: Gabriel Vaughan
Try for $0.00

After the bombs rain down, the entire world is an open wound; it is in those bleeding years that William Fox becomes a man. William flees with his family to Magnolia, a farm in Tennessee, while America descends into madness, anarchy, and death. With the aid of elite Special Forces units, Magnolia emerges as beacon of hope and stability. But evil is hungry and relentless. A new threat stalks the Earth. To save his people, and perhaps all of humanity, William must be more than a lethal soldier; he must become a hero.

Objects of Wrath is the first book in a saga spanning four generations. In a depleted and peeled land savaged by The Fall, William struggles to keep the faith and light burning within him.

Sometimes, the only way to defeat darkness is to become it.

What listeners say about Objects of Wrath

This book was very painful to listen to. The story itself was underwhelming, but what made this book so bad was both the narration and the sentence structure. What made this abundantly clear to me that I listened to J. L. Bourne's Serpent Road right after this one. Wow! Night and day. Serpent Road is outstanding. Trust me on this; skip Objects of Wrath.

A new series to listen to!

I will admit that the premises for the plot of this survivalist story was not the best. Essentially every part of the world had a meltdown, nukes were dropped, biological/chemical weapons were used, etc. The most important part for me was that it's about good, old-fashioned survivalism. After the initial meltdown, the story draws you in and bing, bang, boom....I have a new series to listen to. In other words, I don't care how Sean T. Smith created his story; it's interesting so I'm sold.

I didn't care for the way this story developed. Too many issues conveniently resolved. Too many holes in the story.

Story is predictable and characters one dimensional. Add a narrator that sounds like a robot and wow- had to send this one back for a refund.

I really liked this series. It got better as it progressed. The narrator also got better as the books progressed. My only complaint, and its not really a complaint, is the author could have expanded the books more with additional 'fleshing out' of events. Mind you, I do not want him to turn into David Weber. But he could have. Other than that, the character development was good, pacing was fast, and it moved right along.
Belief in God was also paramount in this series, and it was quite refreshing to see. Not overpowering, but providing as basis for strength, a moral compass for those who survive to move forward with.

A wonderful story, not at all what I've grown to expect in this genre. One that makes you wonder, because everything is plausible and could actually happen. Will be watching for additional books by this author.

AVOID this one, reads like straight to ebook book

There's the bones of a fine story here. With some editing, pruning and word economy it might have been great. Objects of Wrath reads reminds me of many of the self-published, straight to ebook novels I've read in the past.

There are "orphaned characters" that have all the characteristics of a "Chekhov Character/Gun" that are never mentioned again. Too much time is spent in the beginning setting the stage for the epic battle showdown between two radically different factions while very little time is spent on said epic battle, or in making me at least understand what drove the other side to travel so far in the first place.

Hopefully the author will work with an editor next time, and a mentor. He has potential he just needs focus and practice.

One of the best books I've read.

Fantastic story and narration! Keeps you on the edge of your seat. I couldn't put it down.

Where does Objects of Wrath rank among all the audiobooks you’ve listened to so far?

What does Gabriel Vaughan bring to the story that you wouldn’t experience if you just read the book?

Good voice, clear and concise, easy to listen too.

A good book, different from the 'standard' apocalyptic books much more story, much more emotion. I would like more Writer and Narrator

HURRY, confirm your purchase and enjoy!

Would you consider the audio edition of Objects of Wrath to be better than the print version?

I now have a new entry to my top ten list. Outstanding all the way around so again, CONFIRM YOUR SELECTION, you will not be disappointed!