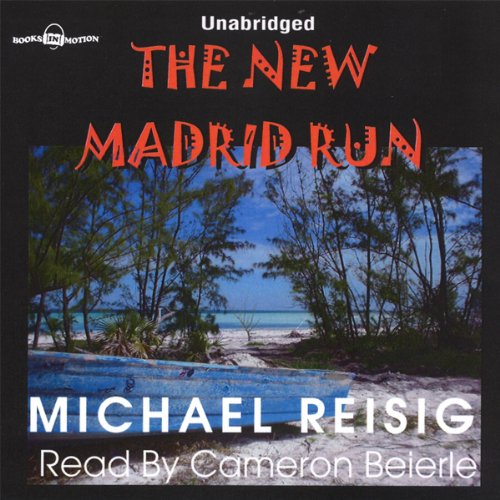 By: Michael Reisig
Narrated by: Cameron Beierle
Try for $0.00

Early in the next century, planetary alignment and the increasing ice mass combine to cause a shift in the Earth's poles. Within a few terrifying hours, modern civilization is shattered. Travis Christian, owner of Island Air Charters in the Florida Keys, has miraculously survived nature's initial onslaught. As he faces the terrible new elements of a changed world and the baser ambitions of his fellow man, he attempts to navigate a battered sailboat toward hope of safe harbor in the mountains of western Arkansas. Along the way, Christian gathers the most remarkable crew of castaways. As one world ends, another begins, and they embark on the adventure of a lifetime.

High seas pirates, fierce storms, and, ultimately, the man who would be king, all stand between them and a place of refuge. Yet, banded together on this desperate gambit for survival, a handful of souls in a new world discover friendship, courage, and faith on The New Madrid Run.

"Reisig has penned a page-turner of an islander¿s worst nightmare¿with a story line right on our doorstep." (The Key West Citizen)
"Thought-provoking, frightening - the best adventure since Stephen King introduced the plague to modern man." (The Texarkana Gazette)

What listeners say about The New Madrid Run

This is about as much fun as a book about the destruction of most of the world's population by a devastating earthquake and tidal wave can be. If you like post-apocalypse fiction (and thankfully there aren't any NON-fiction books in that genre yet), you should enjoy this one. It is different enough from the other great books in the genre (On the Beach, The Stand, On the Road, Swan Song, etc.) that it's interesting to see how the author destroys the world and maneuvers his characters through the brutal gauntlet of post-disaster survival to (hopefully) find their reduced version of paradise. OK, maybe it's not Shakespeare in the prose department, but who'd want to read Shakespeare writing a post-apocalyptic thriller anyway? And some would say the characters are a bit "stock," and even a bit unlikely. But somehow the author manages to move them through their trials and tribulations in such a way that you just don't care about those things (you HAVE to know if they MAKE IT!!). So don't read this book because it's literature. Read it because it's fun. Read it because it's fast and compelling and makes you think. Even if what you might be thinking about is how the author came up with such an unlikely cast of characters and managed to maneuver them into the same boat. What ever your reason, though, read it. It's a great way to spend a couple of hours, and worst case you'll be a few critical steps ahead of your neighbors if a massive tidal wave ever strikes.

If you could sum up The New Madrid Run in three words, what would they be?

From the destruction of character Travis Christian's world to finding a happier life after one heck of an adventure.

What was one of the most memorable moments of The New Madrid Run?

The author's description of how Travis escapes from being killed by an approaching tidal wave got me invested in the story.

This was the second title on Audible that was able to select and enjoy. The story has sadness,romance,action and lots of explosion weaved together in a story line that involves many characters.

I have read this book again and again. Reisig has vivid characters with colorful personalities, some you love to love and those you love to hate. Personalities struggling for survival and/or power. I am looking forward to finding more books by this author.

While I found the topic compelling and the action sequences illustrative the authors tired stereotypes grew tiresome and were pretty appalling in some instances. The reader showed skills at portraying recognizable characterization although some of the southern accents and voices were so similar as to be hard to differentiate. In all it wasn't really the material as much as the authors racial and geographical portrayals and references that were pretty insensitive. If you like post-apocalyptic books you'll probably find this an interesting listen with better writing the underlying ideas could have been the underpinnings of a great story.

Where does The New Madrid Run rank among all the audiobooks you’ve listened to so far?

What other book might you compare The New Madrid Run to and why?

The survivalist series because it's an adventure with unlikely characters.

What does Cameron Beierle bring to the story that you wouldn’t experience if you just read the book?

Cameron Beierle , like Kevin Pierce brings a wide array of voices to his characters that make you see them in your minds eye.

No but several times I found my heart racing in anticipation of what was going to happen next.

This is probably one of my favorite audio books. I have listened to it no less than three times and I find myself thinking about listening to it again. Most audio books are no problem for me to pause and pick up on after other business but this one was different. At several points in the story, I found myself sitting in the truck waiting for things to slow down a little so I could pause it and resume later. The characters are great and completely believable but the Preacher, Carlos and the Sensei were my favorites. This book is, in my opinion, one of the great Apocalyptic stories of all time.

What made the experience of listening to The New Madrid Run the most enjoyable?

The IDEA for this story.

What was one of the most memorable moments of The New Madrid Run?

When Travis went to Publix and Kmart. Very imaginative.

NO....very hum drum. Still worth the credit. I guess it was good for a first try and better than I could probably write. I hope he keeps trying. I'm not a Louis L fan sooo...

A bit of everything

“The New Madrid Run” is a giant change of pace from the authors other books. Seeing as I like his other stuff and post-apocalyptic books I thought this one would be right up my alley. It starts off a bit slow (after the catastrophe) so I was having a bit of a hard time getting into it, but about a third of the way through I really got into the story. It’s well written with some interesting main characters that have their faults, quirks and strengths, which is a big contrast to the villains who are a bit static. The plot moves nicely with a good mix of action (after you get through the first part) and is a ton of fun, but I have to say the main set of characters continuous lack of situational awareness drove me crazy (rule one of the apocalypse do not let the hot woman walk around by herself). In the end it’s a fun ride with a little of everything.

There were some things I liked and didn’t like about the narrator. On the down side his narration is slow! I normally find that if I listen to a book at 1.5X that it either sounds like it’s being rushed or I can’t follow along because it’s going too fast. This was not the case with this book. Also the narrator is good but sometime he’s a bit too cheery which didn’t really fit with this book (but would go so well with his road to Key West books). On upside the accents and voices for the various characters were amazing! He really did a good job capturing them and bringing them to life.

Reader brought it down

The book was so-so for the Armageddon type. I really did not like the readers style though, in fact I had to increase the speed he read at just to get through the book. He read very slow and would go down to a whisper all the time to show emotion. I also thought the dialogues were weak, and often times cringed at what I was hearing. Again, I think the reader exacerbated this issue by using a voice for the leading woman that was hard to swallow. Usually when male readers do women's voices I stop noticing and just accept it, this one however was some sort of falsetto that was not to my liking. That said, I made through the entire book and it helped pass the time at work and in my car, but it would not be my first choice and I will probably not re-read it again.

This book got my attention early on because the main character lives in the Florida Keys, is an excellent shot, has extraordinary self defense skills, is a sailor and pilot of a Cessna 310, and, of course, the babes love him. The theme of the book is that civilization is ending due to a natural disaster. It's fantasy. Could have been good but the characters are too unbelievable, predictable and shallow. I'm deleting this one from my library.

I love this kind of book, world ends as we know it and new challenges arise. However, these have to be the stupidest heros every. They prepare for nothing and when they go to war they forget that the other side may act also. It was just too dumb to enjoy.