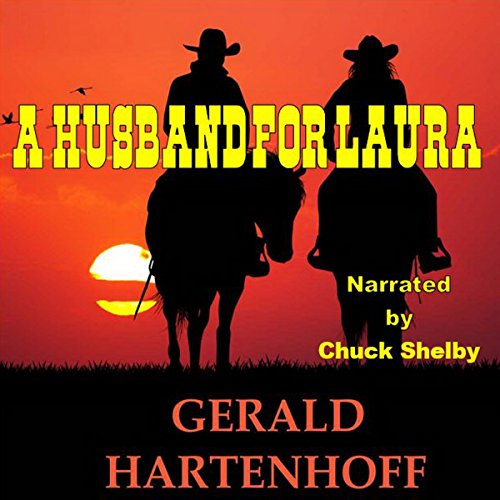 A Husband for Laura

By: Gerald Hartenhoff
Narrated by: Chuck Shelby
Try for $0.00

Laura Patton has no desire to get married. Her mother Millie wants grandchildren, and she wants them now. Since Laura is not interested in the one man from the area that her mother deems worthy of her daughter's hand, Millie sends off for a mail order husband who she believes would be a perfect fit.

Due to complications beyond his control on his way to meet Laura, Tucker Dobbs does not arrive at the scheduled time and leaves Laura and her parents waiting at the stage depot. Laura is relieved when Tucker doesn't show, because now she doesn't have to tell him that she has no plans on marrying him. She also doesn't have to worry about him getting hurt by the hand of Buster Farrow, the man who has told her, in no uncertain terms, that he is the one she will be marrying.

No story is complete without a sidekick. A best friend. And that's where Julie Ohl comes into play. Friends since childhood, Julie and Laura are as close as sisters, and are willing to stand up for one another no matter what the cost.

This is a western romance featuring strong women characters and a male lead that is willing to do whatever it takes. There is plenty of action in this audiobook, and you won't want to miss one second of it.

What listeners say about A Husband for Laura