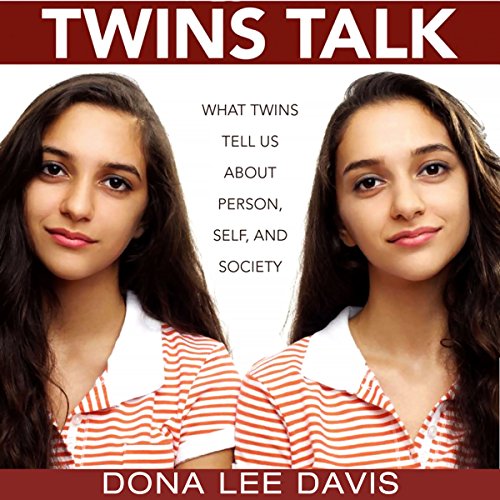 By: Dona Lee Davis
Narrated by: Colleen Patrick
Try for $0.00

Twins Talk is an ethnographic study of identical twins in the United States, a study unique in that it considers what twins have to say about themselves, instead of what researchers have written about them. It presents, in the first person, the grounded and practical experiences of twins as they engage, both individually and together, the "who am I" and "who are we" questions of life. Here, the twins themselves are the stars.

Dona Lee Davis conducted conversational interviews with 22 sets of identical twins attending the Twins Days Festival in Twinsburg, Ohio, the largest such gathering in the world. Lively and often opinionated, each twin comes through as a whole person who at the same time maintains a special bond that the vast majority of people will never experience.

The study provides a distinctive and enlightening insider’s challenge to the nature/nurture debates that dominate contemporary research on twins. The author, herself an identical twin, draws on aspects of her own life to inform her analysis of the data throughout the text. Each chapter addresses a different theme from multiple viewpoints, including those of popular science writers, scientific researchers, and singletons, as well as those of the twins themselves.

"Twins as well as students of anthropology, sociology, and psychology will enjoy this study that differs from others in its blend of personal experiences and scholarship." (Library Journal)

"An invaluable record of a particularly voluble minority...." (American Anthropologist)

"A valuable and much needed contribution to scholarly work on twins. It suggests intriguing new directions...." (Medical Anthropology Quarterly)

What listeners say about Twins Talk