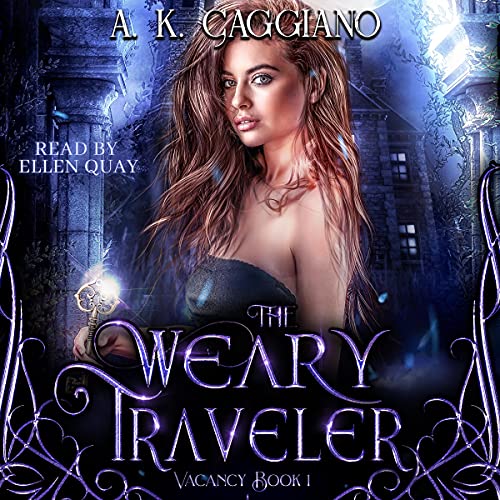 Lorelei Fischer desperately needed somewhere to spend the night, and, as if by magic, Moonlit Shores Manor appeared.

But there’s a cost for everything, magic included.

More than willing to escape her old life and fill the open position at the bizarre bed and breakfast, Lorelei quickly learns of the dangers waiting for her. She’s only human, after all, and casting spells, shifting into wild animals, and caring for mythical creatures aren’t exactly in the wheelhouse of a former barista and art school failure. At the manor, faeries might pull tricks on you while washing linens, werewolves might try to rough up your bellboy, and a shadowy presence in the woods might be your undoing if you ask too many questions.

With the help of her supernatural, live-in coworkers, Moonlit Shores Manor could be Lorelei’s sanctuary from her past mistakes. Though as the truth of the manor’s history unravels, it could just as likely become another place Lorelei must flee to save not just her reputation but her life.

What listeners say about The Weary Traveler

As Lorelei tries to flee her problems she stumbles upon a whole new world. One filled with magic and magical creatures. Can she make a fresh start, or is this just another thing she’ll need to run from?

A. K. Caggiano has set the stage for what is sure to be an interesting and exciting series. I’m looking forward unraveling the secrets and finding out more about all of the characters we were introduced to.

Ellen Quay brought the story and characters to life. I was entertained by her performance, and I look forward to listening to more of her narrations.

The author did a good job with this book. I do feel like there could have been a little more refining done to give some of the characters some more substance, but hopefully these characters will grow as the series goes on. The narrator did a great job bringing this book to life and made this an entertaining listen.

I received an audiobook of this and am voluntarily leaving my honest review.

This is a wonderful listen. I listened to it with my grandkids. I fell in love with it. I will definitely be getting the rest of the series, and it is cousin my favorite list.I do believe that this is a must have in your library.

Written for A Young Adult Audience

Lorelie (MC) is running away from a marriage to a man she likes but does Not love or want a Forever with. She is Driving and lost and is so tired that she says out loud I wish I could find a place to rest and sleep. This is a fun and delightful story with sarcasm in there too. I like the Story but it seemed written for a Young audience and I have trouble believing Lorelie does not know about Fairies, shapeshifters, and such, how Naive.

Book 1 in Caggiano's new series Vacancy. I really enjoyed the smooth narration on this one as well as the story line with all the paranormal characters. A great intro with mysteries and twists and turns. Our main character is Lorelei, a human who's somehow found herself at the Moonlit Manor which seems to be a paranormal world all in of itself. Her typical behavior is when the going gets tough she gets going but when the going gets tough for her here - will she stay or flee as usual?!? I can't say enough how much I love these characters and I can't wait for more!

Lorelei was a interesting and likeable character. She stumbles upon the supernatural world and we are instantly immersed in this world. It caught my attention early on but as the book progressed my attention waned. The story had a variety of supernaturals, humor, and villains. Honestly, I’m not sure if I will continue the story. I slowed down for me in pacing halfway through and I struggled with the book. I’m not sure if I will continue with this series. I would recommend this book to young adult readers as the characters seemed to be in their early 20s and anyone who enjoys reading supernatural books.
I listened to the audiobook and I enjoyed the narrator. She used a variety of voices and tones and it was very easy to follow along.

This one starts out really exciting and intriguing and quickly grows really fun as the reader is introduced to a ton of supernaturals … however for me, it didn’t stay that way. New supernaturals were constantly added in, usually I find this fun but in this instance, I couldn’t help but wonder if they were there for the sake of variety of species. Not all introductions had substance.

While it remained fun, it grew very slow-paced and unfortunately didn’t hold my attention for long. The first couple hours it did, but the next couple hours, I realized I was growing bored.
However, this does seem to be the beginning of a fun, promising world. I wouldn’t call it ‘bad’ by any means, just not for me.


Note:
I listened to the audiobook. This was my first experience with this narrator, and I quickly discovered that she’s one of my faves, if that makes sense. She’s great! Smooth voice, good pronunciation, appropriate tones, etc.

Magic, mythical creatures, and witches surely it was a charmed inspired story. I loved all the characters and especially Ziah. I was so disappointed with the narrator and she made it a painful eleven hours of listening. It took me 10 days to get through the robotic soulless style of narration. I purchased the book and started reading it because I couldn't listen anymore. Nonetheless it's a book I loved. Although I wish one of the witches wasn't named Tuatha because it seemed a little copied from one of my favorite Charmed Episodes. The story and the writing is 5 star worthy and I look forward to Book Two & Three.

I loved this book. Great fun story with superb narration that really makes the book special. Lorelei finds herself staying at an quirky bed and breakfast full of unusual characters if shifters, witches and faeries can be classed as unusual. Being human puts her at a real disadvantage. The writing is wonderful, the dialogue is funny and the characters engaging, From the drunken Karaoke duel to the scary ending its just wonderful. I cannot praise the narrator enough, the tone, voice and range are superb. Makes this a joy to listen to. I am really looking forward to the next instalment, I received a complimentary copy from Storyorigin and am leaving a honest voluntary review.

Soo funny and love the various different creatures present. Cant wait to follow up with these characters. Comedy, and family are paramount to this. Loved it

This is a fantastic first in series. Lorelei is looking for a fresh start, she is running away from her old life. When she arrives at Moonlit Shore Manor. no one realises that she is human and she is offered a job. Now she needs to pretend to be a changeling. If she is discovered the new life and the friends she has made will all vanish.
This story has it all mystery. adventure and humour. and perhaps some romance in the future.
A great listen. I look forward to reading and listening to more by this author.