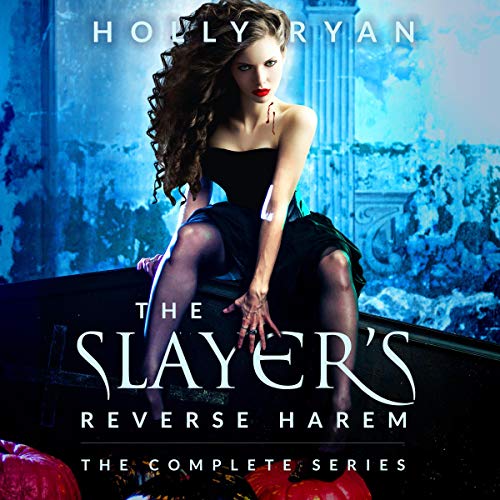 By: Holly Ryan
Narrated by: Melissa Schwairy
Free with a 30-day trial

That’s the ultimatum Belle Harrison, vampire slayer, just received from a demon. Belle has only one response: To hell with him.

Turns out it’s not that easy, though. Apparently the devil doesn’t know the meaning of the word no. Lucky for Belle, three panty-melting vampires come to her aid. Three hot vampires she can’t resist. Hey, we all have our vices. Hers just happen to have fangs.

And she’s going to need these three to help her thwart the devil’s marriage proposal and defeat the terrifying dark force that wants her dead.

What listeners say about The Slayer's Reverse Harem: The Complete Series

I loved this series. The narrator did a great job. Nothing about this series disappointed me. The story is funny and unique. There are lots of laughs and lots of sexy times.

I lasted less than 5 chapters. It took that long for "action" to happen. I am all for erotica, but there was no story development, character development, or real plot even started before the first round of the main character "giving it up ". At least have some story.

This is such great audio. The plot is interesting and the characters are unique. Belle, as the main character, has a lot going on in this story. If you want to be entertained then this book is for you.

Just started and I'm already a little over the narrator's audible breathing, not too many differences between the voices either. The story plunges right in and I'm confused. The heroine supposedly just met these random vampires, being a slayer, and decided to go back to their nest after a few pages? Just plop. Here's this random strong connection with no sustenance.

I love when a series is offered completed so you can use 1 credit and get the entire series. So cool. So far book 1 & 2 in the series fell a bit short for me. Great idea but just didn’t make sense. You have a vampire slayer who falls in love with 3 vampires but still continues and wants to kill vampires??!! And the vampires teach her how to better kill vampires??!! The whole thing with Paul was also confusing. I’m actually on the 2nd book in the series and I’m just so so interested. I think if the author did better job of making sense of all this in the beginning, it wouldn’t still seem so weird now into the 2nd book. Also Belle the vampire slayer is blonde in the book but the girl on the cover is a curly haired brunette? I know it’s petty but it’s a pet peeve of mine when the cover art doesn’t match the story. I’m probably going to stop after the end of the second book and pause the series for a little bit to possibly continue it later when I have a shorter TBL (to be listened) to wish list.

If you want to be entertained and ant to spend a great leisure time then you must listen to this audio. The story is awesome. This is actually a series and I suggest you listen to the previous books to fully understand this exciting audio.

Love this next book

I loved this series and I mean all the books from start till now! I have listened to them all and I feel like it’s ending but I hope not.

Needed backstory. Mostly excessively descriptive sex. No build up and nothing to keep me listening...

Not my tea at all

The narrator is okay. The story is hot but the plot is very fast. I stayed until chapter 5 but nothing is really sticking in my mind while I listen to this audiobook. I'm afrain I used my 1 free coin to a wrong series :(

All over the place...

This story was poorly written, the best parts are the sex. I wouldn’t recommend it to anyone.

So this is the first Holly Ryan series I’ve read and it was okay, I always have higher expectations when it comes to vampires. The Slayers Reverse Harem series is obviously a fantasy RH. Each book is fast paced and given I listened to these via audible it seem I was getting through them quite quickly. Given that it was an audible, I definitely though the voice over was great, perfect fit for Belle! Belle is quite hilarious as well her mind was permanently stuck in the gutter when she wasn’t slaying vampires, actually nah not even then. Her love interests, Jaser, Eddie and Sawyer sound smoking hot and were there for her every need. Ironic huh, vampire slayer shacking it up with not one but three gorgeous vamps. And their scenes together super hot. The only reason why I gave a 3 rating is because the story felt a bit rushed I would have liked a bit more depth and I think that last scene with Paul was entirely too easy given his powers - he shouldn’t of needed a backup plan! But there you have it. I do recommend that these be read back to back.