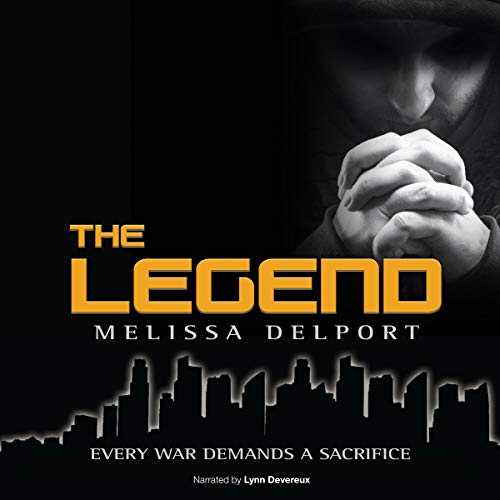 By: Melissa Delport
Narrated by: Lynn Devereux
Try for $0.00

A new adversary has been revealed. His actions are the ultimate betrayal. He must be destroyed, whatever the cost.

It has been almost a month since Kwan and Reed rescued me from certain death at the hands of the self-proclaimed president of NUSA, the man who took the life of my unborn child and left me to die.

What my tormentors did to me threatens to set me on a new path, one steeped in hatred and vengeance. I now walk a fine line between right and wrong, between good and evil, and between love and hate.

While the Legion struggles without my leadership, NUSA is growing more powerful than ever, and worse, they know our secrets. But NUSA has underestimated my friends, my family, my Legion. We will rise again, stronger than before. We will prepare for war, for the final battle that will decide our future. In the presence of hope, we are capable of the most courageous acts.

My name is Rebecca Davis. I am the leader of the Legion and I am prepared to fight to the death to secure freedom for my people.

Melissa Delport's The Legend is the sequel to The Legion and the final volume in The Legacy Trilogy. It is a tense and gripping conclusion and, as in all wars, sacrifice is inevitable.

What listeners say about The Legend

Becks awakes from a coma and is mad.This is ok,but her actions only serve to tear apart relationships.I got tired of her'I was wounded so I can wound others' way of being.Granted,she lost a baby and is only a character in a book,but she sowed a bit of what she reaped.It was good,not great.Naration was ultra slow and plodding.I had to turn the speed up to tolerate it. I was given this free review copy audiobook at my request and have voluntarily left this review.'

This series has really captivated me from the beginning and despite finding Rebecca very annoying I have loved this series. The narrator did a great job. In this book Rebecca is still very aggravating a few times I had to stop because I was so frustrated by her character. But the story and all the other characters really pulled me into the book. In the first book I was hoping for one to end up with Rebecca by the second book I then wanted the other guy and in this book I actually wanted both to find their hea elsewhere and leave Rebecca alone. But the surprise ending left me angry yet I kept coming back thinking about it, hence the mixes feelings. I didn't like the ending and find the main character annoying, but I keep thinking about this book/series so the author did a great job of keeping me interested and wanting to come back to this series.

Rebecca is such a bad ass

They finally get to come to terms and fight for what they believe in. So sad at the end but Rebecca is strong, she will be ok. A little long for me but it really has so much detail that I don’t know what could be cut out.

I loved this all 3 books! I was a little disappointed at the end but for the most part, it was fantastic!

OhMgee. This series is so freaking good. I absolutely enjoyed listening to this audiobook. I was hooked from start to finish. Gah, the whole book was like an emotional roller coaster, but that ending left me extremely emotional. But then it left me like WTC. Is there more?!?

Fantastic trilogy! Twists and turns, ups and downs, heroes and villains, love and hate. This trilogy has it all! Great narration!!

I thought the story had a unique twist on post World War concept. The main character could have been a little less whiney when it came to her dilemma with the two guys. All and all I think young adults would like their trilogy.

Oh My! All the feelings!

A fantastic ending to an intense trilogy. Melissa knows how to really pull out your heart, stomp it, pick it up gently, wipe the dirt off, and kindly place it back in your chest.

Rebecca and her friends complete their mission to bring about a united USA
This was an fascinating series about life after a nuclear attack.
Well written and narrated

This book was amazing from the start. Great ending to a trilogy. Could never have imagined a better narrator and the book is truly the best ending

interesting enough yarn, but didn't warrant a trilogy. I found this last book tedious at times - pity it lost the pace of the first book.

Fabulous ending to a great series

Lynn Devereux does another great job bringing this story to life with her narration. She makes me forget I'm listening to her.

I thoroughly enjoyed this book. The story carries on really well. I have to say that I really didn't like Rebecca for the first part of this book. I alternately wanted to slap her up the side of her head and shake some sense into her. Ooo she brought out all the emotions! The way she behaved did fit with what was going on with her, I won't give away what that is or what happened. I love the twists and turns of this book and the way things that were set up in the previous books played out. I think it drew the trilogy to a close really well. And that ending! Oh that ending! I have to say I LOVE this series and I am sad that I won't be with these characters anymore. I think I might have to go listen to it again.