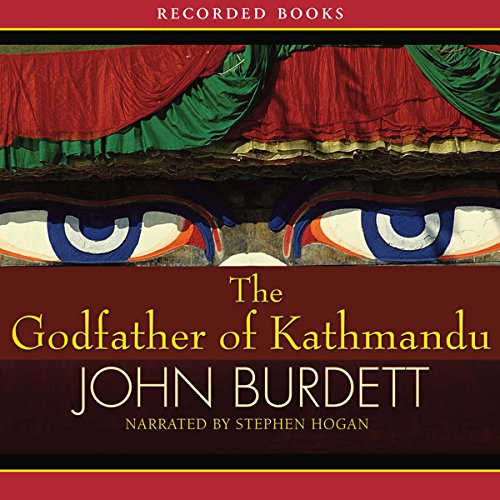 The Godfather of Kathmandu

By: John Burdett
Narrated by: Stephen Hogan
Try for $0.00

John Burdett writes darkly inventive fiction with a comic twist. In The Godfather of Kathmandu, Royal Thai police detective Sonchai Jitpleecheep is called to a grisly murder scene that could make or break his career, but he’s more worried about impressing Tietsin, his new Buddhist guru. However, Tietsin would rather use Sonchai to help him broker a heroin deal worth 40 million dollars. Left with no easy way out and plenty of moral conflict, Sonchai will have to decide between saving his soul and saving his career.

“Sonchai Jitlpleecheep has leapfrogged the field, vaulting from cult favorite to just possibly the most compelling crime-fiction hero in the genre. His fourth adventure, even more than its predecessors, is overstuffed with a dizzying array of multifaceted storylines, all of which exude both the moral ambiguity and the cognitive dissonance that have become this series’s hallmarks.... Burdett juggles the various plots with great dexterity....A whirlwind of a novel.” ( Booklist)

What listeners say about The Godfather of Kathmandu

THE GODFATHER OF KATHMANDU

The story in this book is just as different from any other mystery as the other of the series. Very good plot, the characters are well worked out. Sonchai Jitpleecheep, the Thai Buddhist policeman is so interesting when combining his beliefs, work, and private life. This is no gentle book and delves in dark plots and humor. I have all the John Burdett previous books in the series and enjoyed the readers very much. The accents were perfect. I cannot say the same for Stephen Hogan. His accent is British, not Thai sounding at all. Also, it was difficult at times to tell which character was speaking. They should go back to the original reader, much more entertaining.

Great, despite some drawbacks

I agree with reviewers who complain the plotting isn't as tight as previous installments. However, this is more than made up for by the usual fascinating glimpses into foreign cultures, religions and ways of life Burdett brings so brilliantly to the page. Well worth the journey. Also, the narrator is top notch.

Weakest Installment of an Excellent Series

John Burdett's mysteries featuring Sonchai Jitpleecheep of the Royal Thai Police are a brilliant mix of puzzling mystery and comparative sociology, and while this particular novel may be the weakest of the series, I still found it a worthy listen.

One of the brightest points of the series has been the exploration of this fascinating culture and how it compares and -- more significantly -- contrasts with Western societies. I find myself endlessly captivated by the exploration of Thai and Buddhist culture -- the beliefs, attitudes and general outlook on life. I have to admit that I am only assuming that it is an an accurate depiction, but even if it is not, the novels present an interesting and intriguing alternative to conventional Western thought.

I learned a long time ago that one should never deny the opportunity to learn, and that such opportunities can come from anyone and anywhere; I've learned from people with little formal education, people with varying degrees of intelligence including those whose IQ are far below average, from the highly advantaged and the severely disadvantaged alike. This series punctuates my belief as Sonchai overhears a couple of tourists laughing how one of them found a foot-print left on the toilet seat by his Thai "companion" of the night, assuming her to be a savage for not knowing how to use a modern toilet. Sonchai interrupts to inform them that medical evidence shows that people using a "squat toilet" have a much lower incidence of colon cancer than their "more modern" counterparts. He might have also mentioned that the position can make bathroom trips more pleasant for people with digestive illnesses such as Crohn's Disease who often suffer severe cramping in this most common of human endeavors. But this is just one example found in the novels of the benefits of an open mind.

Sonchai himself is one of the most interesting characters I've ever encountered in all my years of reading and listening to audiobooks. A devout Buddhist constantly concerned with maintaining the positive karmic balance of his soul struggling within a legal system filled with corruption. Considered a "half-caste" because of his heritage as the son of a former Thai prostitute and a Western soldier long since gone, he has the additional burden of distrust from "pure" Thais to contend with as well. He is often assigned to cases that involve foreigners in Thailand; however, since his mother often aligned with rich foreigners who could provide her son with travel and education beyond the limits of one culture, he shines in these situations.

Most of the novels also have wonderful plots filled with mysteries that are complex and straddle cultural gaps. The Godfather of Katmandu is no exception, but the plot here takes a distinct backseat to the evolution of Sonchai. Having recently lost his beloved son shortly after agreeing to take on an exclusive position with his boss that would allow him to provide better for his son, but would also place him in compromising positions regarding his Buddhist beliefs, we find a Sonchai who has lost much of his interest in life. He is not the same Sonchai who cannot resist an interesting mystery or who demands to know the truth even if he knows that the system he works within will not necessarily care or even consider it. He has been laid low and feels unable to combat the inertia and apathy of depression even though he knows it is leading him only further into the darkness.

As I stated before, this is certainly the weakest of the series yet. Part of the problem is the weakness in the plot of the mystery, but a bigger part of the problem is seeing Sonchai in such a place. And if the mystery seems weak, it is made even weaker by Sonchai's indifference. And yet, it is also a story of a man seeking redemption. If you follow the series, you cannot help but hope for Sonchai to find it and to regain his interest in life and following the path of the Buddha. And that will keep you listening.

Already interested in John Burdett's work, I purchased this story on the recommendation of a friend. Absolutely spellbinding. It combines Buddhism, morality play, crime story, detective novel in remarkable package tied up with a bow by excellent narration. Having just finished this, I am casting about for the next read....

I must've missed the preceding book which might have helped to access our heroes status. As is moved rather slowly. Lots of Buddhist overlay, which was not a bad thing. The two plots were interesting but not as engaging as I recall the earlier books being.

Intriguing mystery in a foreign land

If you could sum up The Godfather of Kathmandu in three words, what would they be?

What other book might you compare The Godfather of Kathmandu to and why?

This compares to other Sonchai novels. You really get a sense of Thailand and the areas that the detective visits.

And scene with Colonel Vikong

Yes, but there was no time for that.

It weaves historical facts into a top flight murder mystery. No, you cannot possibly guess more than a very few of the twists and turns.

Do not waste your time

This book is the fourth in a series. My wife and I enjoyed the first book up until the last 50 pages. I am not sure what happened to the author but the book turned from a murder novel into a sex depravity circus. Also the Thai people are not all as portrayed in the book. Lastly the Buddhist perspective is skewed and shows that the author has not studied Buddhism.

Has The Godfather of Kathmandu turned you off from other books in this genre?

Yes. I will not read such again.

If you could play editor, what scene or scenes would you have cut from The Godfather of Kathmandu?