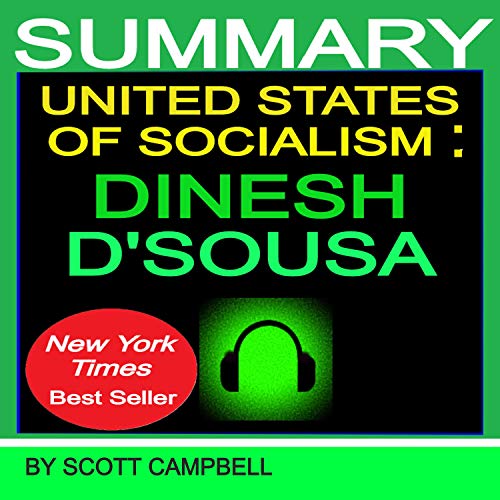 Warning!: This is a best seller summary and analysis of the United States of Socialism by New York Times best-selling author Dinesh D’Sousa. It is not the original book, nor intended to replace it. If you are a Democrat don't listen to this audiobook because you would learn many characteristics about your party that are embarrassingly despicable. If you are to survive at all as a Conservative or Independent, then this is a must-listen. Your family will always live under constant attack.

Dinesh D’Sousa writes to expose the Democrat socialists, their “Socialist Dream” for what a “racket” it is and then proceeds to bury them. He shares how the socialists first arose, how their diabolical techniques are infused with a form of alienating “Identity Socialism,” and how we must rally behind Trump's lead to stop them.

Use this best-selling summary and analysis audiobook to:

Scott Campbell penned many related books on socialism, Marxism, the Deep State, the Obamas, and Trump but is not associated with D'Sousa or his publisher in any way. Scott Campbell is wholly responsible for the content of the summary audiobook. If you are the author, publisher, or representative of the original work, please contact scampbell@whitehatrevolution.com with any concerns or comments.

Identity politics is a political strategy. People of a particular identity bond into alliances to exclude all others. Race, class, religion, gender, sexual orientation, and socio-cultural background are common identities. There might be an intersection of several identities. White, Christian, heterosexual male, middle-class, and Conservative is the intersectional identity who the socialists want to alienate and annihilate. It also describes many of President Trump’s supporters. For a replacement, they might want a non-White, Muslim, transgender female, lower class, and Democrat - someone who, solely because of their perceived identity, will blindly follow Democrats. Identity politics' goal is to force group agendas upon others to bring about socialist “change” towards establishing total control of a society and its wealth.

Identity intersectional politics is a strategy adopted by socialists to intentionally create divides and conflicts. The Obama administration in its second term became experts at it. Democrat identity socialists are trying to magnify and harness this natural array of divisions to create a majority coalition to implement their desired changes.

Dinesh D'Sousa is blessed with one of the most brilliant and analytical minds of our time. As a devoted supporter of our Founding Fathers, the Bill of Rights, and our Constitution, he champions Conservative causes. He defines Conservatism as holding sacred the principles of the American Revolution and promoting the "self-made man". Embedded in free markets, the self-made man brims with ideas that lead to invention and advancement. D'Sousa likes to recognize Ben Franklin and Frederick Douglas as prime examples of self-made men. He likes Abraham Lincoln for representing the virtues of the American Revolution and the concept and importance of equal rights for all.

D’Sousa migrated to America as an exchange student. He wanted to see our middle-class abundance and experience our relative freedom from corruption. He was in for a big surprise.