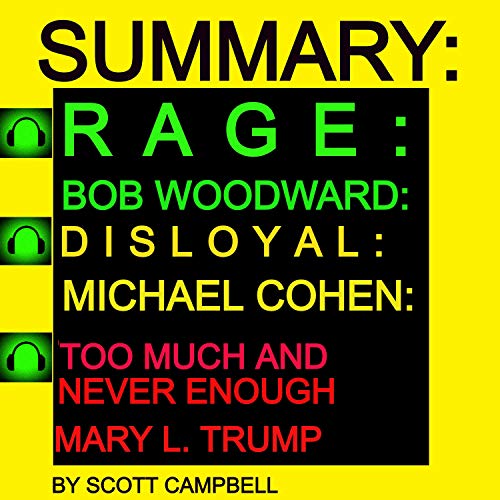 Summary Bundle: Rage by Bob Woodward, Disloyal: A Memoir by Michael Cohen, Too Much Is Never Enough by Mary L. Trump

Note: Summaries are not intended to replace or be substitutes for the original books in any way or fashion. Pouncing on the moment when President Trump was informed in the Oval Office that the Covid-19 pandemic would most likely become the most significant threat to national security during his presidency, best-selling author Bob Woodward has woven the story with Trump’s other challenges into an anti-Trump tirade that sometimes backfires. The book is called Rage. Woodard gets frustrated often in his interviews with Trump, and sometimes yells at Trump and gets distressed. They told Trump that the coronavirus, before it could be slowed down, could scale up to the level of a Spanish flu which, in 1918, buried nearly 675,000 in America alone.

Woodward has the scoop no one else does because he interviewed Trump 17 times and climbed into his mind and thoughts over seven chaotic months. Trump characterized the way he felt with an apt metaphor: “Dynamite behind every door.” Between a rock and a hard place, the American people's health stood on the line, and, most likely, so did his presidency. Doubt came into play, as did elements of denial, as Trump put on his combat boots, ready to wage war not only against the virus but the Left and the Chinese who wanted to see him fail.

Michael Cohen, in Disloyal, admits he was mesmerized by Trump, like a cult member, and began to see himself breaking his moral code, and stuck with Trump for money, power, and fame. Cohen boasts that he knew Trump better than his own family, and it was not a pretty sight. He saw Trump as a sociopathic mobster boss who would do anything to win and destroy anybody who challenged him in his quest for success.

Mary L. Trump, in Too Much and Never Enough, claims Trump is an unlovable, bullying, cruel, crass, racist, sociopathic fraud with delusions of grandeur. Rather than working for the American people who voted for him, Mary suggests he is only out for Trump and his children, for the empire, for more power, riches, and fame. He wants to be the "greatest" and the "best" American president in history. The American people are but tools for him to reach his personal goals. He would never associate with the type of people who voted for him: middle-class Bible Belt Republicans.

In one section, Mary recalls witnessing her father pointing a rifle at their mother's head, among other childhood memories. In another, she becomes a sophisticated political analyst ripping apart Trump, reminiscent of a Democratic New York Times columnist. Is Mary, as a psychologist, qualified to make statements like Hillary, well known for her "pay to play" corruption, and who was the most qualified candidate ever to run for president?

You get three summaries of best sellers, all centered on controversial President Trump, rolled into one bundle. Enjoy!

What listeners say about Summary Bundle: Rage by Bob Woodward, Disloyal: A Memoir by Michael Cohen, Too Much Is Never Enough by Mary L. Trump