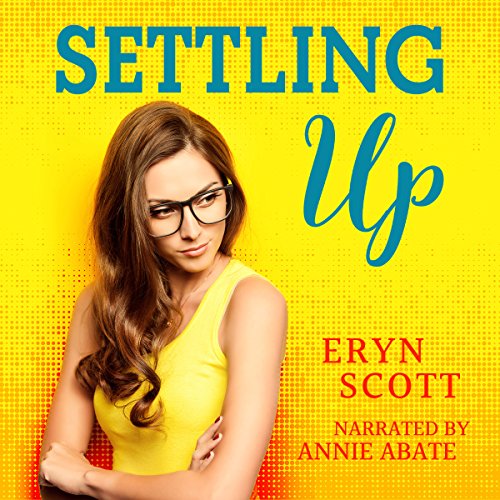 If there's one thing statistics professor Lauren Sinclair knows, it's probability. And she understands her current equation all too well.

Desperate to get herself back into the dating game, Lauren relies on statistical analysis and a ridiculously detailed list to help her find the perfect man.

Her friend Mack thinks it sounds like she's trying to find a car instead of a husband. What does he know? He's a tattooed, totally-not-her-type Blackjack dealer.

But maybe this professor needs to learn that love is more than a numbers game.

What listeners say about Settling Up

What made the experience of listening to Settling Up the most enjoyable?

The main character is very easy to relate to and hilarious. Lauren is both organized and neurotic. She is somewhat anti-social but has a good heart. The narrator nails the performance of this character.

What other book might you compare Settling Up to and why?

The main character is similar to Stephanie Plumb from the series by Janet Evanovich. Stephanie and Lauren are both likable, vulnerable, quirky, action oriented girls who get themselves into humorous situations without thinking. Those situations often involve hunky men.

Yes. The book is light, entertaining and well-written. The narrator gives a first class performance embodying each character.

Great book. I highly recommend it. I received this book for free from the author, narrator, or publisher in exchange for a fair review.

Took me awhile to get into, not sure if it was the narrative or story.
Annie Abate has a beautiful voice so I'm not sure what it was, either way I enjoyed it.
Who doesn't love a HEA

I was voluntarily provided this free review copy by the author, narrator or publisher.

This was a good one. Good narrator for the voice of this book. She brought the lighthearted dorky comedy. Nothing uber unique but it was a really enjoyable listen that had me chuckling!

Would you consider the audio edition of Settling Up to be better than the print version?

I feel that the audio edition provides a lively rendition of the author's words. Annie Abate does a great job of adding the feeling and emotion behind the words.

Lauren, she's the main character and is hilarious. She has some anxieties but knows that and knows how to address these anxieties.
She's real, and doesn't try to hide how quirky she can be to others.

Have you listened to any of Annie Abate’s other performances before? How does this one compare?

This was the first time I've heard Annie Abate read. I feel she did well and was able to bring the characters alive through her words.

Yes, the moment when Lauren realizes that she's made a huge mistake. This climactic moment brings the whole story together and really makes the story.

I LOVED THIS BOOK. Its a bit cheesy, but I couldn't help loving the characters, especially Lauren and Mack! I found myself "laughing out loud" so many times. Yes it is predictable but worth the journey.

"I was voluntarily provided this review copy at no charge by the author, publisher or narrator."

First couple of chapters kinda went on and on and... Narrator started out too strong, grating. Once storyline kicked in, around chapter 5, plot and narrator settled in.

This is my type of rom-com, I found the inner musings of neurotic Lauren, um...er... amusing! If a book can make me laugh out loud, I know it's something special and this book has many of those such moments!

Lauren usually talks out her problems at the blackjack table of the local casino, but when her regular dealer is a no show, she starts up an unlikely platonic relationship with the tattooed new dealer Mack, it has to be a platonic relationship, because Mack has absolutely zero of the requirements on Lauren onerous list.

Instead, Lauren's relegates Mack to the infamous "friend zone" and uses Mack, a recent widow, as a sounding board for her dating life and in the process they start to share parts of their life outside of the casino, in essence becoming BFF's. When Lauren thinks she's found her perfect match on paper, she starts to question if perfection is what she's looking for, can Lauren look past her list and see the perfect fit in front of her?

This audiobook was given to me to me at no cost in exchange for an unbiased review, thanks, Audiobook Boom!

Would you try another book from Eryn Scott and/or Annie Abate?

Yeah, I would try another book by Eryn Scott.

Laura, the main character, got on my nerves in the beginning. I did like the way she grew and changed through out the book. Mack was awesome, but I found myself rolling my eyes at his over the top sweetness until they actually started hanging out.

Did Annie Abate do a good job differentiating all the characters? How?

She did pretty good with the female characters, but the male voices need a bit of work.

Do you think Settling Up needs a follow-up book? Why or why not?

No, the story wrap up was satisfying and I wasn't left with the feeling of wanting more.

Overall, I'm glad I listened to this book and will probably listen to it again.

It was a sweet story and impossible to put down. I loved the humor and was cracking up for most of it!

The characters are very likable. The story is predictable but I enjoyed every bit of it. It is a light, feel good story with lots of funny moments.

I'm looking forward to reading more books written by Eryn Scott! I loved her writing style. So much fun!

A sweet and beautifully quirky romance with unusual and interesting characters. I really enjoyed it!

I placed this book into my favourite collection around six chapters into the story. And my decision remains: I love this story. It was humourous to the point that the embarrassing moments had me pause the book so I could outwardly cringe! How someone can mess up situations so charmingly was beyond hilarious. I recall making the same comment about Isla Fisher's character in 'Confessions of a Shopaholic'..

This story is indeed brilliant, it's what any book should aim to do: make you smile and laugh out loud! The story follows a statistics professor who's life seems to spiral out of control with the emergence of a bald spot, early one morning. This sends her on a mission to score a guy, as quickly as possible. But not just any guy, but someone she can settle down with. I'd say she's halfway there, for one thing she certainly knows what she's looking for. She has a precise shopping-type list. Now, if only she could find someone who would fit the mould.

Accompanying her on this bizarre mission, she has her sister and an unlikely candidate of a strange man- her new Blackjack dealer at her local casino. She makes a habit of heading there, she's good with numbers, far better than with people and it calms her. And, Mack, the new guy, dishes out pretty good advice- he seems to have had a run in with love once, and so becomes Lauren's accomplice in her wild quest of finding love. And, he enjoys her stories and tales of her bad dates...A good friendship develops, but do either of them want more? How will thimgs end up, when Lauren's 'perfect on paper' man walks into her life?

There's so much I've left out, for you have no idea just how weird and charmingly insane Lauren is, you have no idea how Mack is such a good man.....I've left out a lot, to allow you the opportunity to enjoy such a story. In need of some advice? Keep an open mind throughout.

With these sort of books, books of the romance genre, there's always an obvious formula for the beginning, middle and end of the story. For this book though, I really kept an open mind, I didn't even stop to check how much I had left of the story....I just went with the flow, and when it went off trail....it was exciting, the ending came as a surprise.

This story reminds me of a philosophy some men I know follow, it goes like this: 'be mean, to keep 'em keen'. The (what I would call) 'ridiculous notion' that respect and adoration isn't required, that it's too boring, and off- putting. I was pleased to find that there was a man in this book who actually cared for Lauren, respected her and treated her well, and challenged the idea that such a relationship can be boring at all. I hate to think that such men are rare gems. But it certainly made the story more beautiful, a love story with a happily ever after. Ther was good banter between the characters, sexual tension- hinting at the obvious, but repeatedly denied, chemistry. The comedy was genius.

The narrator, Annie Abate, did an incredible job of this book. Her voice kept the book light and fun and she performed the voices really well, very talented! Her voice was fitting for all the characters, particularly Lauren!

I've had a chance to read Eryn Scott's work in the past and, for the longest time I thought nothing could top 'A Chance for Sunny Skies'. But, 'Settling Up' did just that!

I received this book for free through the author, in exchange for an honest review.