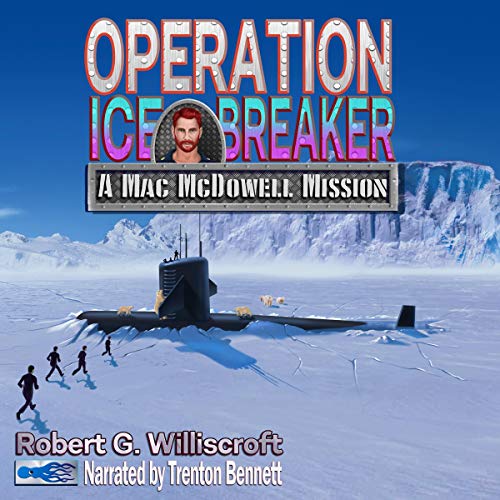 By: Robert G Williscroft
Narrated by: Trenton Bennett
Try for $0.00

USS Teuthis Saturation Dive Team Officer-in-Charge (OIC) Mac McDowell is leading his submarine team on a mission to lay SOSUS arrays under the ice in the Arctic when they clash with a new Alfa-class highly automated Soviet submarine. Overwhelmed by mechanical problems, the Soviet crew abandons their sub near Pt. Barrow, Alaska. The Teuthis skipper launches DSRV-1 Mystic, so Mac and his crew can board the empty sub and gather intelligence. The arrival of an even more advanced Soviet sub leads to breathtaking underwater clashes with the specter of war looming.

Will the Soviets sink Mac and his crew to their watery graves, or will Teuthis safely return to Alaska where Mac's new love, Kate, anxiously awaits his return?

Yet another thrilling Mac McDowell mission!

This audiobook was provided to me for free by the Author, Doctor Robert G. Williscroft, in exchange for an honest review.

I feel I must begin this review by stating that I was not as enamored with Mister Bennett as narrator as I was Mister Budwill... but he grew on me, though I do still find I prefer Mister Budwill's performance more. Having now finished the audiobook, I can say that I do enjoy Mister Bennett's performance more than I initially did, and I believe that my initial problems came from having the characters sound different to how I was used to them sounding, as I had listened to Operation Ivy Bells at least 12 times before getting this one.

When I first contacted Doctor Williscroft about a review copy of this audiobook I was very very excited for it because I had bought and read through the book on day of release but I couldn't wait for the audiobook because the audio format always brings a new level of life to the story. I have to say that I was not let down one bit! This audiobook is extremely good and though I had a little trouble adapting to the change in narrator I soon began to recognize the characters as if I had simply listened to this book immediately after finishing Ivy Bells.

There are some parts of the story where the divers encounter marine life and while some are terrifying others are utterly adorable, and I mean to tell you they legitimately made me smile because of how cute they were. In particular there is an inquisitive Narwhale who meets the divers and it's even better in audio form.

The highest praise I can give this book and audiobook is that it stacks up well, in my humble opinion, to Tom Clancy's The Hunt for Red October which is one of my favorite books, audiobooks (the original 80s recording by Frank Muller) and movies of all time. Likewise I feel that the Mac McDowell missions would make excellent movies or TV Miniseries (each book getting its own series naturally)

Back to the audiobook, I found that the added sounds and musical cues that this audiobook had added a nice bit of immersive depth to it that Ivy Bells did not possess and though not necessary for good story-telling made for a nice little bit of depth.

I have already reviewed the book itself on amazon so I will finalize this review by saying: I recommend this audiobook, it's an excellent listen. Doctor Williscroft's personal knowledge as a man who did the types of things these men do, make him extremely qualified to write these stories and it really shines through, he also writes very believable and life-like characters.

Buy this book, enjoy the adventure and get set for the next book because it should be a real cooker! (Also check out Operation: Ivy Bells, the first book in the series, it is amazing as well)