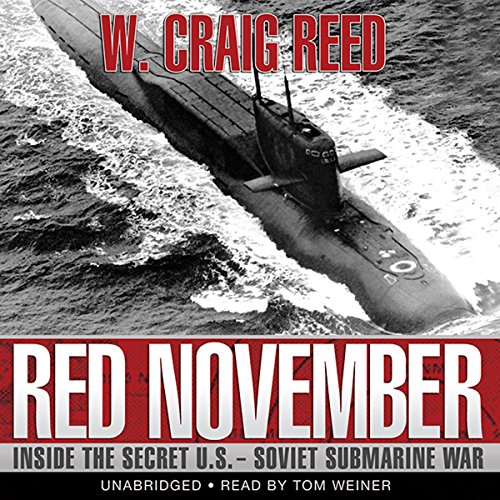 Red November is filled with hair-raising, behind-the-scenes stories that take you deep beneath the surface and into the action of the Cold War.

Few know how close the world has come to annihilation better than the warriors who served America during the tense, 45-year struggle known as the Cold War. Yet for decades, their work has remained shrouded in secrecy. Now, in this riveting new history, W. Craig Reed, a former navy diver and fast-attack submariner, provides an eye-opening, pulse-pounding narrative of the underwater struggles and espionage operations between the U.S. and the U.S.S.R. that brought us to the brink of nuclear war more than once.

Red November is filled with hair-raising, behind-the-scenes stories that take you deep beneath the surface and into the action during the entire Cold War period from 1946 through 1992. Reed served aboard submarines involved in espionage operations, and his father was a top military intelligence specialist intimately involved in the Cuban Missile Crisis.

Reed is one of the first authors to obtain so many in-depth interviews with dozens of navy divers, espionage operatives, submariners, and government officials on both sides (including several Soviet submarine captains) about the most daring and decorated missions of the conflict, including top-secret Ivy Bells, Boresight, Bulls Eye, and Holystone operations.

Transcending traditional submarine, espionage, and Cold War accounts, Red November is an up-close examination of one of the most dangerous times in world history and an intimate look at the men and women who participated in our country’s longest and most expensive underwater war.

“If Tom Clancy had turned The Hunt for Red October into a nonfiction thriller, W. Craig Reed’s Red November might be the result. Here is the full-throttle and riveting story of espionage, secret missions, and the never-before-told tales of submariners on the front lines of a clandestine war. Not to be missed!” (James Rollins)

What listeners say about Red November

This 2 part book really is in two parts. The first part covers the beginning of the nuclear age, and covers some, though not nearly all, of the espionage stories detailed more completely in Sherry Sontag's excellent "Blind Man's Bluff". There is an interesting and significant portion of this that talks about how we figured out how to track the Soviet subs by their transmissions.

Then the second part segues into how subs helped the American side during the Cuban Missile crisis and the Cold War, including the Jennifer Project. There are some excellent stories, and a few gripping moments, but mostly it isn't a compelling, edge of your seat read. If you want to be informed, get this book. If you are looking to be entertained, there are better ones.

Good for fans of "Hunt For Red October"

"Red November: Inside the Secret U.S.-Soviet Submarine War" wasn't quite what I expected but it was a very good listen anyway. I had expected an account of most if not all the most interesting Col War sub-vs-sub encounters. Instead it's a more detailed account of certain key episodes in the U.S.-U.S.S.R naval interactions during the Cold War, with an emphasis on thosemissions directly related to the author's service history and that of his father. That said, it is a very interesting book that should appeal to fans of Tom Clancy's fictional "Hunt For Red October."

One strength of "Red November" is that the author goes into just enough technical detail to make it interesting to the subset of readers who have sought out a book on nuclear submarines, without getting into such minute detail that it becomes tedious, such as the section in which he describes how one nuclear submarine became stranded on the bottom when sand and other debris clogged a water intake valve. The author must have put considerable effort into editing that section and others to make it accessible to readers who, though likely educated, are not necessarily well versed in the technical aspects of nuclear reactors, propulsion systems and so on.

The narration by Tom Weiner is excellent.

50/50 recommendation. The story spent more time outside of subs than in them. It was interesting, but not something I couldn't put down.

I ended up being annoyed by the stiff narration and mispronounced words and that overshadowed the story.

Stiff narration and mispronounced words. Narrators should do a little research--especially for books with real places and technical jargon--to get the pronunciations correct. Distracting when it's wrong and disrespectful to the material.

Well-written and exciting history of submarine warfare during the Cold War. Describes how Soviet sub commanders during the Cuban missile crisis came a lot closer to firing nuclear torpedoes than we all thought. (Scary!) Many other exciting events are described. If you are former Navy, you will like this book. If you are a submariner or ASW sailor or airman, you will love it! The reader is good, but mispronounces several important geographic names that will grate on you if you are former Navy. For example, Sasebo, Japan, is pronounced “SAS-i-bo”, not “sas-SAY-bo”, and its not “mar-RAY” island in Northern California, but Mare Island, as in the name of a female horse. There are other glaring mispronounciations. (Why don’t producers makes sure their readers have a pronunciation key to the names used in a book?) Aside from that, the book is well worth the price.

Its no Blind Man's Bluff

Having been enthralled with Blind Man's Bluff from start to finish, I was hoping Red November would give more of the same. But it just doesnt measure up. This book recalls the facts, describes the event, but forgets to tell the story.

It is fascinating, and I do not know of any books on the primary subject, which is radio direction finding of Russian submarines in the Cold War and the effect on the Cuban Missile crisis. The story from the Soviet side matches well with RISING TIDE, which is based on interviews with the Russian skippers. I would recommend this book to my submarine qualified friends. It is pretty technical, and not dumbed down, which I consider a strength. The only criticism is that as a conner he should steer clear of engine room issues and also theories about SCORPION that are unprovable.

If you are in the Navy or wear Dolphins, be prepared for some very weird pronunciations, for instance "Mar-eh" Island instead of Mare Island (like the horse), and "g'dunk" instead of gee dunk. I blame this entirely on the reader for not picking up the phone and asking about an unfamiliar word.

Retired Spook on the ice.

Where does Red November rank among all the audiobooks you’ve listened to so far?

I am reasonably new to this format, but with a littlle limited experience, I do have some comments.

What was one of the most memorable moments of Red November?

Finally realizing what Walker's treachery had cost us.

Know I can see more clearly; Where we were and what we were doing.

Not quite what I expected

I expected this book to be an in-depth look at the cold war submarine actions between the USA and USSR. I was looking for something that explained the significance of these warships and the crews that manned the in the outcome of the cold war. I'm also an engineer, so I was interested in how technological developments in the subs on both sides impacted the arms race. This book didn't really do any of these things, at least not in modern terms. Red November focuses mostly on the Cuban missile crisis and doesn't really discuss any events from the 80's or early 90's.

What could W. Craig Reed have done to make this a more enjoyable book for you?

Red November tells stories from the perspective of the submariners who lived through the events. The author recounts these stories by recreating the events through the dialog of the people who were there. This is a good way of telling the story, but does not leave much room for analysis of the significance of the events that were going on around the characters.

Could you see Red November being made into a movie or a TV series? Who should the stars be?

The narrator did a good job. He was entertaining and I never got bored with his performance. The only criticism I have with is performance is that he had some issues properly pronouncing some words and acronyms in the story.

By understanding where our world has come from, Craig Reed helps us see where it is headed. The sacrifice of our submariners, and their part in the Cold War, makes this an important listen for all. Whether you believe we live in a safer world, or one that is increasingly unstable, you will gain a greater appreciation for our warriors of the deep. You will also gain a greater respect for their foes.
Tom Weiner was an excellent pick for reading this book. His Russian accents simply add to Red November's credibility.

I enjoyed this book very much. The author talks about history that is years old but is just now available for the public to read. I enjoyed the technical terms and all the explanations.