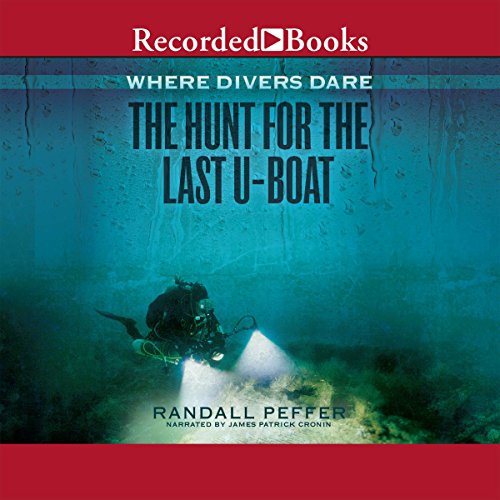 By: Randall Peffer
Narrated by: James Patrick Cronin
Try for $0.00

In the tradition of Shadow Divers, the story of the courageous men who dived on the last sunken U-Boat off the Eastern Seaboard.

On April 16, 1944, the tanker SS Pan Pennsylvania was torpedoed and sunk by the U-550. In return the sub was sent to the bottom by three destroyer escorts that were guarding the convoy. For more than 60 years the location of the U-boat's wreck eluded divers. In 2012 a team found it. This was the last undiscovered U-boat in diveable waters off the Eastern Seaboard of the United States, more than 300 feet below the surface, nearly 100 feet deeper than the sub in Shadow Divers. This is the story of their 20-year quest to find the "holy grail" of deep sea diving and the tenacious efforts to dive on this treacherous wreck.

What listeners say about Where Divers Dare

great story but at times a little too much...

Good story but could use a little less hero development, but other then that it was fine.

great book. More Naval History than diving or diving history. really good in insightful story especially coming from the perspective of the Submariner

Best audio book in my 20 years of listening to boo

This was such an amazing story told from eyes of the past and the present bringing me to tears and loving family and country.. Words cannot explain how beautifully written powerful moving, authenticity historical and plain dam great this listen. I've listen to audio books probly one A-day for the past 18 to 20 . This is my favorite listen thus far. It's a story present day divers finding A 70 year old U-boat. That almost rewrites history.. You meet the brave divers that never were in war. But you also meet the war veterans that are in their nineties one is a 100 years old the tells of their memories back 70 years ago during this battle expertly written narrator great writing superb it exciting interesting if you want knowledge excitement nostalgia extreme sports and history all-in-one. Plus an image of the great men of World War II and what our country has strive to bring us to who we are today