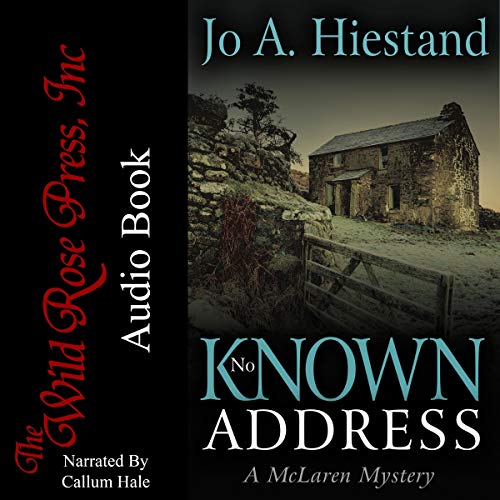 By: Jo A. Hiestand
Narrated by: Callum Hale

Luke Barber went missing from his village, leaving no clue to his whereabouts or why he left. Now, three years later, Luke’s father hopes ex-cop Michael McLaren can find a trace of Luke, alive or dead.

As McLaren pokes through the case details, he wonders if the pressure of succeeding in tennis or music, or his upcoming marriage, was too much for the lad and he simply ran away. And McLaren’s suspicion may be correct, for he soon is assaulted and left for dead - a hint that he’s upset someone connected with this case.

McLaren unearths the lies and false identity shoved at him, and uncovers what became of Luke, a discovery aided by idolatrous love and an ancient stone man.

What listeners say about No Known Address

Jo A. Hiestand weaves together an intriguing mystery filled with twists and turns that kept me riveted right from the beginning to the shocking end! There were many surprises revealed about the different characters in this well written story and it was difficult to put this one down until I found out what was going to happen next. I certainly wasn’t expecting some of the shocking revelations, that truthfully had me break down in tears! I haven’t listened to the previous books in the series however I didn’t feel lost at all as this story was easily a standalone. There was some reference to previous cases the odd time but it never made the story confusing at all. Callum Hale was a joy to listen to. His variety of voices and accents for the many characters were excellent and all the emotion he put into the story made it extremely enjoyable to listen to. Hopefully he will narrate the following books in the series. I have no hesitation in recommending this book in the least. I am actually looking forward to see what the author has in store for Michael McLaren in the next book!

Well,... someone must be buying this series, or Audible wouldn’t have the entire set of them,.. but I can’t imagine for one moment why in Heavens name they would,.. a more complete and utter bore could not be found..!!!