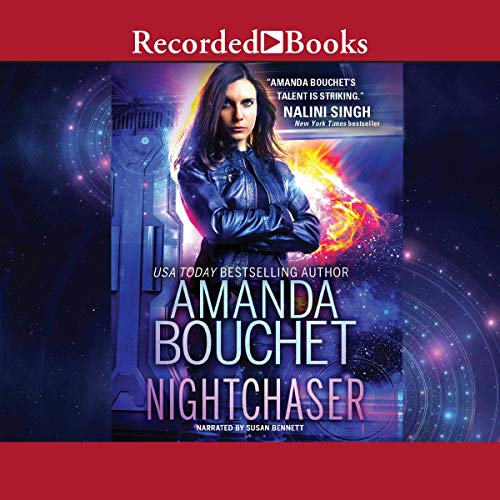 By: Amanda Bouchet
Narrated by: Susan Bennett
Try for $0.00

Tess Bailey: the galaxy's most wanted.

Captain Tess Bailey is in deep trouble. She and her crew are on the run, pursued by a tyrant who'll take them dead or alive. Tess's best hope is a tall, dark, and much-too-appealing stranger, Shade Ganavan, who says he can help her. But his motivations are far from clear....

Shade Ganavan: arrogance, charm...and that special something that makes you want to kick him.

With the dreaded Dark Watch closing in, what Tess and Shade don't know about each other might get them killed...unless they can set aside their differences and learn to trust each other before it's too late.

What listeners say about Nightchaser

I enjoyed the characters and the plot, but the way the author writes romance is cringeworthy. There are good ways of portraying immediate attraction, and then there's... this. I rolled my eyes many, many times.

Nightchaser is book 1 in the new series, Endeavor, by Amanda Bouchet. Unfortunately, this author releases books one year apart so now I have to wait until January 2020 for book 2.

Since I read and loved the author's debut series Kingmaker Chronicles, I decided to buy and read this book as soon as it released and went into it completely blind. Nightchaser is a totally different type of book from the Kingmaker books, though still within the fantasy genre, but it is just as well written as the others.

This book was exciting, captivating, and at times emotional. I appreciated that the slow burn romance aspect from the other series was left out of this series and we got some adult sexy times in book 1.

Nightchaser is a great start to what will likely be a fantastic series. I am anxious to get my hands on the next books and see where this story will take us next. I have one huge prediction that I can't wait to have proved or disproved.

Audible: The narrator did a really good job. She was enjoyable as a narrator and I recommend this as an audiobook.

Terrific start to a new series! Great characters! Lots of action and emotion! I love when a book keeps me up at the end because I have to finish! I will definitely be looking for the rest of the series!
Narration was great. This was the first time listening to Susan Bennett! She brought the characters to life.

I stumbled across this book and keep coming back to it, so i gave the book and the author a try. I've never read/listen to a book that is about space so I have nothing to compare it to, but I read/listen a LOT of books. MS Bouchet has written the beginning of a good series. You will start with suspense and move to some back ground on the characters and mix in some budding romance with hot moments to more suspense some mystery in there and some chuckles. Don't get me wrong I liked it but it was a bit slow in a few spots a bit to much inner thinking with Tess. However I will get the next book. MS Bennett was the narrator she did a fantastic job. Told the story with so much emotion and brought each and every character to full life. I swear I was listening to a movie. That doesn't happen very often. Highly recommend this narrator. Over all i'm hooked to this series can't wait to find out what happened next. Bring it on.

I really like the story and the narrator is terrific. My f...bomb filter was on overdrive! The author clearly has a very limited vocabulary and pretty exclusively uses the f...work as her choice for most adjectives, adverbs and a lot of verbs. I get a little for highly inflammatory situations but this was like verbal assault. The story is really good and a really nice twist for space opera, just wish for less crusty language.

Amanda Bouchet is by far my favorite author!!!

I love this book so much! I’m a huge sci-fi need and love romance. This book is a perfect fix for both. I always get so excited when I get into my car to drive because I know I will be listening to this.
The narrator did amazing. It did take me a chapter or two to fully get on board with how she read but once I was on board I was hooked!!

Written like a teenage fantasy. While still hung up on "Gabriel" Tess begins a torrid, graphic love affair with a stranger. The story was so hung up on sex scenes it failed to have much of any plot. I won't be listening to any more by either the author or the narrator.

A slow start gave way to an engaging read.

I am not going to lie, this started really slow for me. In fact at one point I almost DNF’d the audiobook. I think it was a combination of a few things. First, I recently listened to Polaris Rising, which was phenomenal and second the story started out disjointed and I couldn’t get my footing. I will say the second half of the book was stronger and I ended up slipping in.
We meet, Captain Tess Bailey and her crew of damaged, misfit thieves as they escape with stolen cargo from a military superpower whose general (apparently Tess’s father) wants the contents returned. There is now a bounty on her head. They escape and end up on a planet in another solar system but their ship is badly damaged.

Tess hires Shade Ganavan to make the repairs and this is where things get complicated. The story that unfolds is heavy on romance with suspenseful threads. Shade and Tess have sizzling chemistry, but both have secrets and don’t act right away. Mixed singles followed by explosive heat and these two need to make decisions.

What Tess doesn’t know is that Shade is a bounty hunter. He is trying to garnish funds to win back his family’s business. Bringing Tess in could restore everything. He struggles with this internally just as Tess struggles to let him into her inner circle of trust. Both threads felt genuine as did their off the chart moments.

I enjoyed all the characters, Shade in particular, but it took me a while to warm up to and understand Tess. Again the struggle was in the first half.

The second half of the book was intense with plenty of action and confrontation with the enemy. We finally get details on this world, Tess’s upbringing and what makes Tess different. It could turn the tides and end her father’s tyranny.

Susan Bennett did a stellar job with the narration and helped me pull through the first half. I felt she captured Tess and Shade from their chemistry to personalities.

my kind of atmosphere

Wow. Was I intrigued by this book. I didn't know what was going to happen so it kept me on my toes. I enjoyed all the characters. And the relationships with each other. I can not wait to read the next book. It will be a definite buy.

I love this characters as much as the Kingmaker. And I love the way Susan Bennett narrated it.