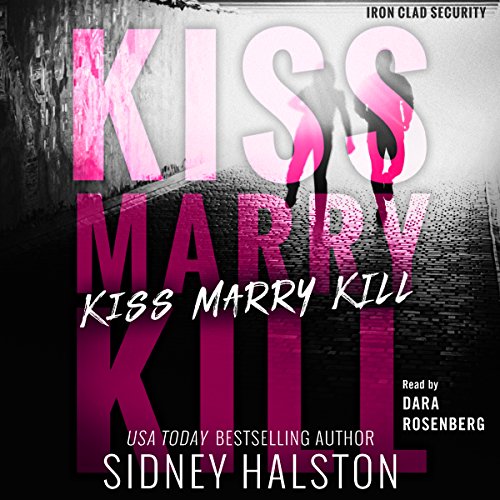 By: Sidney Halston
Narrated by: Dara Rosenberg
Try for $0.00

Five years ago they fell in love after one whirlwind summer. Now she's an internationally famous musician and he's officially out of the military, but when their worlds collide, can they keep things strictly professional? Sweet, thrilling, emotional, and sexy, fall in love with Megan and Jax in USA Today best seller Sidney Halston's Kiss Marry Kill.

He's been chasing a memory....

It was just supposed to be a regular Thursday afternoon...and then he saw her. Sitting in seat L214, one seat over from his at the baseball game, right next to her douche of a soon-to-be-ex-boyfriend. An impromptu kiss for the kiss cam, and Jax knew his life would never be the same. Five years and a tour in Afghanistan later, Jax is back stateside running his own private security firm, Iron-Clad, with his best friend. He isn't the man he used to be....but Megan isn't the sexy and sweet, though sheltered, 22-year-old he left behind, either. And she's in trouble...but now they're on the run.

Megan Cruz has made something of herself. She’s turned her dreams of pop stardom into a reality. But when a deadly stalker breaks into her home claiming to be her number one fan, the only person she can turn to is the boy who got away. But Jax isn’t the same carefree charmer who stole her heart, then broke it when he joined the military. This man is seductive, hard, guarded. And he'll do anything to protect what's his.

"I rooted for this couple right from their hysterical meet-cute! This hot, overprotective action hero will leave you swooning.” (Tessa Bailey, New York Times best-selling author)