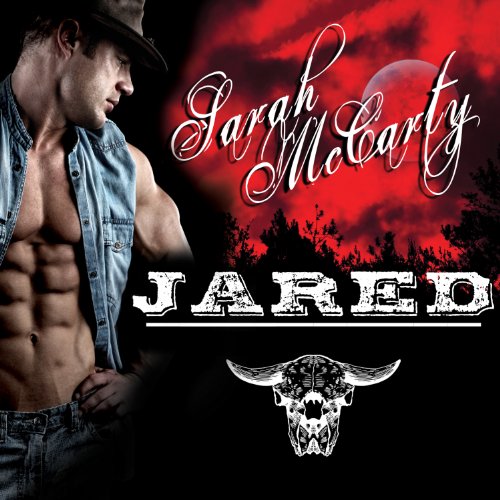 Her source of power is her greatest weakness. Tough, ruthless, and loyal, Jared Johnson has always been a force to be reckoned with: first as an outlaw and now as a vampire. Caught in a war between immortals, he doesn't have time to waste. But when a female vampire is attacked, he can't just walk away. He expects a quick good-bye, but what he gets is a vulnerable woman who intrigues and seduces while giving away nothing of the secrets holding her hostage.

Raisa may not have physical strength, but she's smart and she's survived as a vampire longer than most. She's done it by keeping to herself, but that's about to change. Forced to accept Jared's protection, Raisa finds it increasingly difficult to resist his forbidden allure while keeping the secret that could destroy them both.

"McCarty has done an amazing job with this alternate reality paranormal romance.... So engrossing, it's hard to remember that this is just a story." (Romantic Times)

What listeners say about Jared

I like Sarah McCarty. I think she is a great writer. However, I didn't care for this series. I couldn't get past the "energy" between the vampires that was constant throughout the series. The narration was wonderful. I am a big fan of Tavia Gilbert and I know that she is good with voice changes for each character. With that in mind, I was able to listen to the story through to the end. With all of the options on the paranormal and vampires and werewolves, I think this series is mediocre. I would recommend the Hell's Eight series 10 times before this one. If you want a good vampire series with enjoyable romance and lust as well as action, try The Night Huntress Series by Jeaniene Frost.

Kind of boring and slow

The book just moved kind of slowly. There needed to be more action in it. Even the "love scenes" were pretty boring (which is uncommon for McCarthy's books, typically).

Would you ever listen to anything by Sarah McCarty again?

I'm not sure if I will listen to any more books from this series. Her other series is really good, though.

Have you listened to any of Tavia Gilbert’s other performances before? How does this one compare?

Tavia Gilbert is one of my favorite performers for audiobooks, especially for Jeaniene Frost's books. She did a great job in this book, as usual.

The only reaction this book sparked was......boredom. I had to force myself to finish listening.

I find that the Johnson Brother are all very sexy, but Jared just has that very dangerous appeal about him. This book is far better than Caleb, but each book set's up the next one
Pros's the stories in each book are funny, although Caleb was the funniest, Cons: her sex scenes need work, two people shouldn't be having a full conversation while in the thro's of passion. If your on the run from enemies, how do you have time to literally stop argue with each other.
All and all it is a good series and I have listen to all three books and each story gets better than the last. Can't wait for Slayed's book

Jared powers are fun to listen to. The Johnson Brothers together are hilarious. They are a group of guys that don't know anything they NEED to know about women but know EVERYTHING they need to know about THEIR woman which puzzles the heck out of one another!

I sure hope Sarah writes a book about Derek!

Looks like those that loved Caleb went on to read Jared becuase there are no bad reviews so far for Jared, and there shouldn't be. Like Caleb, Jared has his own demons, finds his one true love and fights for their existence as a family. Loved it!

This is a new and most excellent version of the supernaturals in a new way. i really liked this story. i started with the second book simply because it is the one i found and loved the sample.
will definitely be buying the first and third books also. narrator is wonderful and the change in voices is so great i can tell who is speaking without being told, even when there are multiple persons in a conversation. very very good!

loved the story and it is extremely believable in a supernatural kind of way.

i liked this story a lot, all stars out of all available.

I think I listened to this book in 1.5 days. I couldn't put it down. It is worth your credit/cash.The story had more substance then most "romance" books and was not predictable. You get to know more about the rest of the Johnson famly. The narrator did a much better job for this book. The men sounded like men and you could distinquish between them.

I'm still in it

Well I'm very engrossed in this series so far. There's just something about cowboy vampires. That's a spin I haven't heard in a vampire series before and I'm enjoying it.The fact that the books are taking place in modern times is a plus. I enjoy the cowboys having the characteristics of their time and also they have lived long enough to develop other talents of modern times. The ongoing plot is very good and it keeps you wanting to go on to the next book to see what happens to the brothers and the women in their lives.

So this is a YES this is worth the credit or purchase price. I would advise you to listen to this series in order. Also be advised these books contain explicit sexual content.

In this story the female lead has an accent. The narrator does a good j9b of keeping the voice consistent through out the story.
Jared and Raisa have a very rocky beginning, middle and ending. Secrets make things difficult. She is on a mission for Sanctuary but it is so that she can save someone.
When Jared finds her going through the werewolve's office he knows that she isn't all that she portrays.

great story... but had to skip chunks between 5 minutes and 40 minutes long due to lack of plot progression. My advice is... jump to the next chapter in the instant the sex begins or you have had enough of it... the story is worthwhile... but there is simply too much fluff

I hate this kind of angst!

I liked the story, overall, with the exception of the type of angst used. I hate it when secrets and dishonesty are used to develop angst, in a novel. It causes me to be irritated and takes away from my enjoyment of the novel.
-V from Kansas