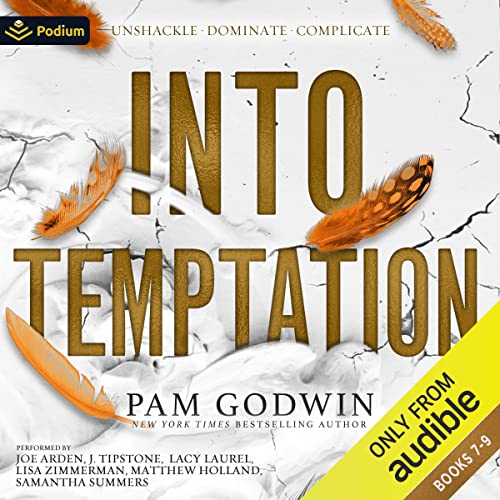 Contains books seven, eight, and nine of the Deliver series.

While deadly in combat, he’s an indomitable weapon in bed. He can coax an explosive release with only his mouth and annihilate with insidious, mind-blowing pleasure. When he infiltrates La Rocha Cartel, he must seduce Vera Gomez to determine whether to rescue her. Or kill her. Nothing can distract his icy, lethal focus. Except the cartel’s most feral captive. The nameless raven-haired beauty is his key to dismantling Vera Gomez. But the ferocious little fighter challenges him at every turn and unknowingly battles her way into his heart.

There are many reasons to jump off a bridge, but Rylee Sutton only needs one. Her husband’s betrayal. Just before she leaps, she receives an email from a stranger. The boy’s message is meant for his dead girlfriend, but his anguish speaks to Rylee. It saves her life. Over the next decade, Tomas Dine continues to email his dead girl. As he evolves from a teenager into a hardened, vicious criminal, Rylee is there, reading every intimate word. He doesn’t know she exists. When she comes forward, he despises her, his cruelty unforgivable. But she doesn’t back down. In a carnal battle of punishment and passion, hatred dominates. Until he loses her. Amid looming danger and unsolved murders rises a devotion forged in strife. They must fight for answers - and each other.

Cole Hartman is a mystery. He works alone, sleeps alone, and satisfies his aches...alone. He hasn't touched a woman in seven years. No one will ever compare to the one who broke his heart. Until he stares into the seductive eyes of his enemy.

He finally meets his match in the redheaded Russian spy. But she's a dangerous risk. His obsession with her leaves him only one choice. If you love something, let it go. If it doesn't kill you, hunt it down and take it.

What listeners say about Into Temptation: Unshackle, Dominate, Complicate

What An Epic Series

I knew this series would come to an end one day and I thought I would be prepared for it - I wasn't. When I finished Complicate, I took the time to absorb the journey of the protagonists from book 1 Deliver - Liv to this last book of Cole's. What an incredible journey it has been. Even though each of these books are a standalone based on different couples they are all connected by survivors/warriors and awesome villains!

Cole's story is indeed complicated. He was involved in a love triangle in the One Is a Promise trilogy and years later found himself on the front lines with a misfit gang of "villains". His journey is very different then the other people in this series but it is no less heartbreaking. I loved Cole since The One is a Promise trilogy and I was so hurt by his heartache. But I cheered to see him get back into action as a crusader for justice by joining the Deliver team. I knew it would be good for his soul. I also knew that eventually it would be good for his heart...

This book has Cole falling hard and fast while kicking and screaming with his inner demons for a woman that is truly his equal and match. The gorgeous "villain" Lydia brings Cole to his knees and takes him on a hot and obsessive journey filled with passion and danger. She is the woman that he was meant to dance with all along. These two really know how to tango as their passion explodes off of the pages leaving you gasping! This is the love story and woman that Cole deserves - he just has to live long enough to see his happily ever after.

This book was a wonderful and bittersweet ending to a sexy, brilliant and dark series. Never have I met so many villains that I fell for emotionally and physically. Somehow Pam redeems them all. Though Cole was never a villain, he too finds redemption for past mistakes and wrongs. This story also helps me heal from Cole heartache and redeems Pam in my eyes from her wounds against him and me in One is a War (LOL).

I will miss reading this series but I love that somewhere out there in the land of fiction these survivors/warriors and "villains" are still out there fighting the good fight while loving passionately with their entire being. Cheers to them all and to Pam for one heck of a ride!

Love Pam Godwins stuff.
The only thing I wish is that she would write in derail all of the action that takes place when they make their move to tale out all of the bad guys. She always ends the books when it could just start to get really good.
Leave much to be desired and that is a but frustrating.

This is by far the BEST audio series I have EVER listened to in my LIFE. GIVE ME ALL THE DARKNESS. ALL THE CAPTOR/CAPTIVE SEX. HOLY CRAP.

"Into Temptation: Unshackle, Dominate, Complicate" is the third and final boxset in Pam Godwin's deliciously dark and twisted Deliver Series and includes books seven, eight, and nine of the gripping saga.

"Deliver," the first book of the series, dealt explicitly with kidnapping, brutal rape, sexual abuse, and sex trafficking and set the scene for the remainder of the series. Each book in the series focuses on a different couple (or thriple, as the case may be) with ties to the sex trafficking operation in "Deliver." Most of the characters are profoundly broken people who have survived circumstances that should only occur in nightmares, and many of them have done some unbelievably despicable things, but each couple does eventually get the HEA they deserve.

Much of the narration on this set of books was not up to snuff compared to the previous books. In "Unshackle," I enjoyed J.Tipstone's performance, but I was disturbed by Lacy Laurel's breathy voice and melodramatic performance, and her male voice was cringe-worthy. I continued to listen with expectations that the narration for the next book had to be better. Boy, was I wrong! In "Dominate," Matthew Holland had a pleasant voice, and he did a good job portraying different characters and conveying emotion, but Samatha Summers' lethargic and halting cadence was exasperating, and her tendency to pause after every word or two was so disruptive that I considered requesting a refund. Joe Arden and Lisa Zimmerman's spectacular performance in "Complicate" saved the overall narration rating for this boxset.

I gave books one through six of the Deliver series five stars across the board, so I had high expectations for this set. While all three books had original and intriguing plots, the style and flow felt forced and stilted. Although no one would call the books in set three "light," they were not as "dark" as earlier books in the series. There were times that I wondered if these books were, in fact, written by the same person that authored the books in "Deliver Us" and "From Evil," but ultimately decided the sub-par narration was making me question the quality of the writing. "Unshackle" and "Dominate" were not bad, but they were my lowest-rated books in the Deliver series. All of the characters from books one through eight made appearances in "Complicate," and its story brought a satisfying sense of closure to the series. All in all, the Deliver series was captivating and unforgettable. If you appreciate an undeniably dark, perverse, and wicked romance and have three credits to spend, you will want to snatch up all three boxsets in the Deliver series.