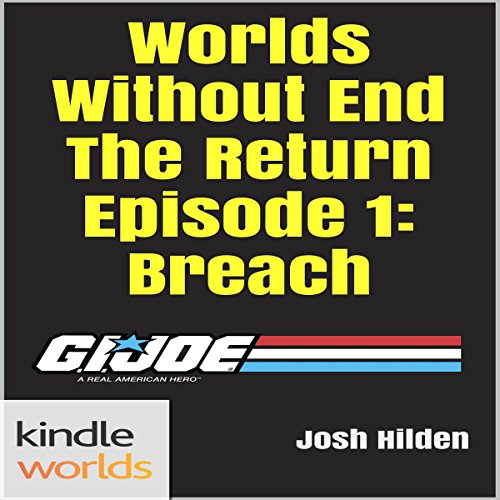 By: Josh Hilden
Narrated by: Trevor Clinger
Try for $0.00

This is the first of five novellas in a series and is a direct sequel to the classic episodes Worlds Without End Parts 1 & 2.

Ten years after three Joes were left on an alternate version of Earth ruled by Cobra, contact is reestablished. In a series of covert sneak attacks, the ability of the G. I. Joe organization to react to new and unexpected threats is crippled. As the facts come to light, it comes down to a race to our world from being the next to fall to the forces of Cobra.

What listeners say about G.I. Joe: Worlds Without End the Return Episode 1: Breach

It truly is unbelievable how bad the quality of the narration is. I believe it's a person trying to sound like a program. It's truly unbearable. Please listen to the sample before purchasing this audio book.

Would you try another book from Josh Hilden and/or Trevor Clinger?

No unless better narration

Would you be willing to try another book from Josh Hilden? Why or why not?

Yes was the worst I would rather of listen to it in ancient greek and try to.figure it out

Did G.I. Joe: Worlds Without End the Return Episode 1: Breach inspire you to do anything?

The narrator is TERRIBLE. It sounds like a text-to-speech translator with a slight lisp. I can’t concentrate on the story because he’s reading so badly. Glad I got this title for free because I’d be angry if I paid for this.

The most important part of an audiobook apart from the content is the narration and I could not listen past the first 5 minutes, I even tried to listen to other chapters to see if it improved, the voice sounds like the voice of a computer from the 80s. With this narration I could not finish listening to this book, I want to believe that the story is good and I would rather read it for myself than listen to this voice. I like GI Joe but this narration ruined the audiobook. I hope that someday I can read this story elsewhere.

Couldn’t get past the narration

The story is good. Set in the GI Joe universe; has the characters I know . The narration is horrible though. It almost sounds like a mechanical/ computer voice.

OMG!!! I really can't believe that this piece of garbage was actually recorded. The narration was absolutely horrible! It lost all coherence immediately. The story is impossible to follow due to the pace and cadence of Trevor Clinger and his MANY mispronounced words and names are laughable at best. How does this guy have a job!?!?!? This is definitely one you should try to find in text rather than listen to it as I'm sure that the story would be more enjoyably read.

Mono tone, mispronounced words. Should get a refund. Unable to finish. Love G. I. Joe

Have you ever wondered what it would be like to allow Apple Talk to read an action-adventure novel to you? Well here's your opportunity. I honestly don't know if this is a good book or not because I couldn't power through the computerized voice constantly putting the wrong emPHAsis on the wrong sylLABle .

Don't do it. Don't pull the trigger on this one.

I hope they adapt this story for television or movies. It’s a perfect continuation from the original story.

Worlds without end was probably my favorite episode of the show. But this? This has to be the worst impression of a 50s robot I have ever heard. I’m so glad I got this with my free trial. Clearly spoken by someone who’s never seen the show. I died laughing everytime this joker said “Baroness”. Look the story up on wattpad and read it there, I don’t think I made it 10 minutes thru this. Damn.