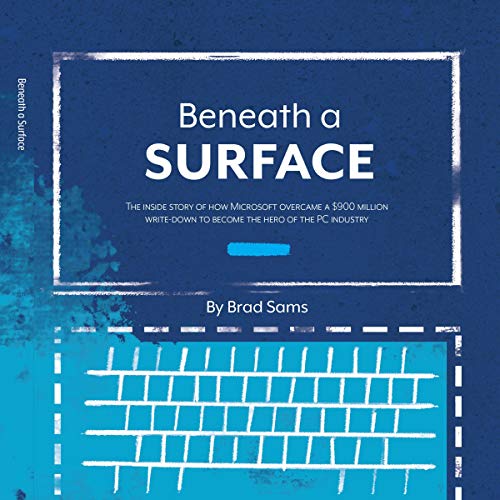 After having failed to create a market for tablets in the early 2000s, Microsoft launched a new hardware effort in 2012 to disastrous results. The company was forced to write down $900 million in inventory, and Surface’s future was in jeopardy.

Beneath a Surface tells the inside story of how Microsoft turned its hardware dreams into a reality with new details about the challenges Panos and his team had to overcome as well as the internal politics that nearly killed the brand.

For fans of Microsoft and those who are interested in the business of building brands, Beneath a Surface is a must-hear that tells the story of how Microsoft turned a failure into a fortune.

What listeners say about Beneath a Surface

I have a Surface Pro Four I got in 2016. I find it easy to use. This book is about developing and marketing the Microsoft Surface product line. It is the most popular tablet/laptop on the market. The book tells of the struggles to achieve its place in the market.

The book is well written and researched. It was easy to read and all technical jargon was explained. I am not a big fan of laptop computers. I prefer the desktop computer to work on. I must say my feelings were the same about the portable typewriter verses the desktop typewriter. I enjoyed this book and learning about what goes on inside a company to create a product.

The book is four hours and 3 minutes. Jon T. Lewis does a good job narrating the book.

I followed Brad for years and lived the Surface story with him as it happened. This is a great book recounting that story of which he was a part of from outside of Microsoft.

Even with this partial success story, Microsoft continues to stumble in the consumer space. Brad details this with the clarity of someone who was involved from the beginning. Great first book.

The narration was a little dry but easy to understand.

It was OK. Nothing earth moving here.

My only interest is that I bought 2 RT's and now own the laptop 3. Hoping for aiytle more insider baseball. Since I've been listening to Windows Weekly forever, really not much new here.

Great read for the technology nerds

I'm really big on book's/stories about the history of technologies. I felt this book was a excellent read for learning about struggles and successes of the Microsoft Surface line of products.

I never know so much of the internal power struggles of MS, which has bring out the worst of a company and affected millions worldwide. I also never know so much about how technological development can be so challenging. Thanks to this book, I got a glimpse of them. Great job.

Brad has clearly spent considerable time doing research for this book, was well worth it. However, the narrator took no notice of any commas, full stops or headings - just read every word continuously in monotone.