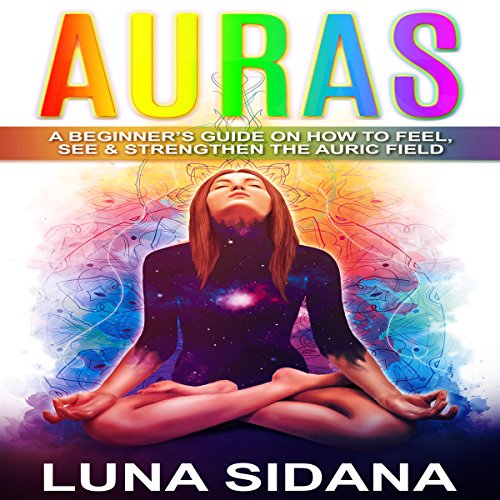 By: Luna Sidana
Narrated by: Kristyn Mass
Try for $0.00

A clear-cut guide to the auric field and how to develop it.

The most agreed upon origins of the word "aura" can be traced back to Greek and Latin roots with the meanings "breeze", "breath", "wind", or "air". In the mid-19th century, the term started to take on a different connotation in Europe, and was used to describe the "characteristic impression" made by a person. A few years later, spiritualists adopted it to convey the subtle field of energy that radiates off beings.

Hindu scholars insist that "aura" actually comes from Sanskrit, and refers to the spokes in a wheel. The imagery of a spoke originating from a hub is a parallel to how the aura radiates from the physical body.

For the average person, the aura extends approximately three to five feet from the borders of the physical body. It is densest at the section closest to the flesh, and gradually becomes more transparent and indistinct the farther away it goes. It can be described as a cloud or flame that gradually fades out of the field of vision.

During the course of the book we will explore:

Download now and learn about the true nature of the aura!

What listeners say about Auras

This audio book it takes just an hour to teach but then it has a full information's I needed to know more about auras. This is such a satisfying kind of audio book.

This audiobook is really for beginners

I really loved this audiobook

Such a great audiobook. By just simply following instructions, I can do now on how my field plays in my spiritual evolution and now, I can feel the vibes around me. I really loved this audiobook.

An audio boo tells a lot of new information.

Its an audio book tells a lot of new information about auras. It tells those human energy had a different layers and kinds of colors. Also this audio book says that the human auras shape like an egg that surrounds entire our body. I will recommend this book to others for them to educate by the helps of this audio book.

This audiobook helps my body and mind to become more healthy but also my family, every time I do those basic need for auras my kids are also doing what I'm doing. So nice! Really a helping book. Worth to read.

Im an health conscious girl. This audiobook, helps me in a different kinds of an easy way instructions to maintain and also to strengthening my good health.

Audiobook of auras is great. Because it may or I may do those given instructions while I'm listening to this audiobook. And felt so satisfied for the content of the book.


This audiobook "Auras" makes me more interesting for on how I can see those negative vibes around me. This is really an informative and interesting audiobook.

This is a really an infomative one

I'm a person who really loves nature and all things that surround me. Then I saw this audio book, I was just felt, Wow! It will surely help me for what I want and then, this audiobook never failed me. Now I can do auras that are because of this book. This is a really an informative one.

I really enjoyed this book! There's a good amount of content with plenty of practical advice. Definitely recommended.