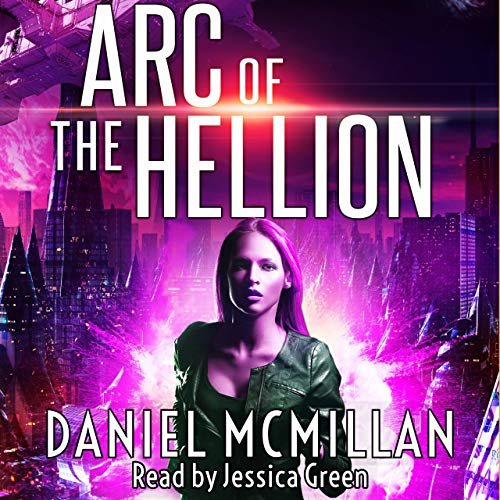 Arc of the Hellion

By: Daniel McMillan
Narrated by: Jessica Green
Try for $0.00

Loren stood up so a galactic criminal would fall. But the closer she gets to justice, the further she is from the law.

Loren Alaysia may not always be on the right side of the law, but with her saucy charm and Robin Hood morality, she clearly fights on the side of justice. When Loren and her crew come to the aid of a woman who's been cheated out of her family's high-tech legacy by a ruthless con artist, they discover that the balance of power in the galaxy may have been thrown out of equilibrium because of it. An evil warlord bent on expanding his empire now controls a powerful new technology.

The galactic underworld is no place for an amateur, and even someone as seasoned as Loren may be out of her depth this time. There is corruption and danger at every turn, and no one is who they appear to be.

Join Loren and her crew in an astonishing tale of social justice and outrageous cunning. Filled with breathtaking escapes and one extreme escapade after another, Arc of the Hellion will keep you enthralled with fast-paced action, scheming villains, and great surprises.

What listeners say about Arc of the Hellion

Arc of the Hellion review

Really enjoyed listening to Arc of the Hellion book 1. It had unique characters, an interesting story, and look forward to the rest of this series.

A Sci-Fi must read!

Totally enjoyed reading the hard copy of Arc of the Hellion book 1 ! Found it to be a very captivating read! Listening to the narration on Audible just added an extra “level” to the whole story. The excellent narration of Jessica Green brought the fascinating characters to life! Definitely recommend!

I was lucky enough to be given a free copy of this book. A delightful sifi with pleany of action, a compelling story line delivered perfectly. the characters are great and likable, the journey takes you on an adventure, and keeps you engaged. The narration is flawless, really giving the whole experience that little extra. I would most definitely recommend this book.