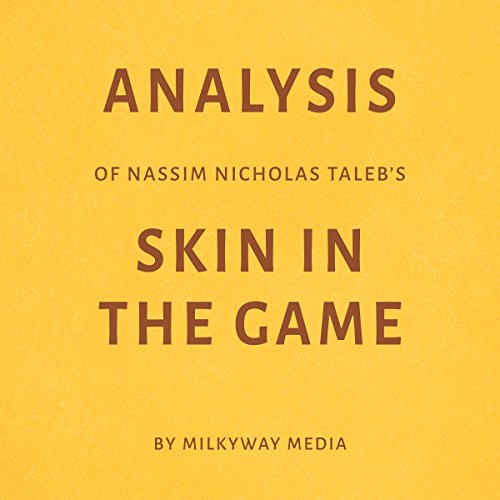 Analysis of Nassim Nicholas Taleb’s Skin in the Game

By: Milkyway Media
Narrated by: Natalie Gray
Try for $0.00

Nassim Nicholas Taleb’s book Skin in the Game (2018) argues that balancing risk and reward is essential to creating a fair society, and that a lack of such balance creates a world fraught with unnecessary complexity and risk. Understanding the balance or imbalance of risk and reward in social systems helps to explain how the world works… Purchase this in-depth analysis to learn more about Skin in the Game.

Note: This is not Nassim Nicholas Taleb’s book Skin in the Game. It is an analysis of that book.

Not having read the full book limits this review

I can't really evaluate this, as I would have to compare it to the book. But I had enough reasons to shy away from Taleb's full-length book to be satisfied with this for now. My problem with Taleb is, in recent outings (I have read four of his books), he delivers good thoughtful value but seems to spend a lot of his (and my) time being very self-involved and petulant. I sampled the full book and the grousing and finger-pointing started within the first 5-minute-or-so sampling. Elsewhere he criticized book editors, and this aversion, I think, shows, sometimes in his favor but often not. That said, this summary has some interesting ideas, though these, as presented here, are not alien at all (or strikingly original, IMO). The point is worth making that some players in this society externalize risks and losses pretty neatly to others. But if this is a free country, with freedom of contract, that's kind of how it works: people who know less and calculate worse, do worse. They get worse outcomes. Every contract is by nature a division of benefits and hazards. Thus too every structure and institution society employs. The idea of personal honor,perhaps as exemplified in some earlier societies' stated values (stated ones, anyway) as a superior lynchpin that might make a better society sounds kind of neat if only sophisticated people could be persuaded to buy in. Then again, honor seems to bring us downsides too. It seems sometimes to over-attach people to controlling and bullying and lying about situations to save face. I don't see the solution here, though some laws might be reformed, yes, as has been said elsewhere, to make purveyors of, say, modern financial instruments to retain risk, to eat their own cooking, as it is said. But modern life is full of soft landings that disperse bad outcomes onto others. Nobody in 2008 lost a hand or head, and would we go back there? I don't find the example of ancient societies persuasive. What is being a king, if it is not concentrating benefits while dumping risks and losses onto others? (Thorstein Veblen's critiques of earlier captains of industry as systematic dumpers of less desirable doings into others' hands springs to mind.) Yes, we can find a few standouts who led their armies at personal peril, but many more are the folks in crowns shirking the hard parts for others to absorb. Few are those who take one for the team. So, there may be some pretty stimulating ideas floating around here, and springboards to thought, conversation and perhaps some betterment. Taleb is good sometimes for dredging up old and forgotten thinkers (and doers), of brilliance. But if I don't hear anything else about the main book, I'll stick with this summary, satisfied.